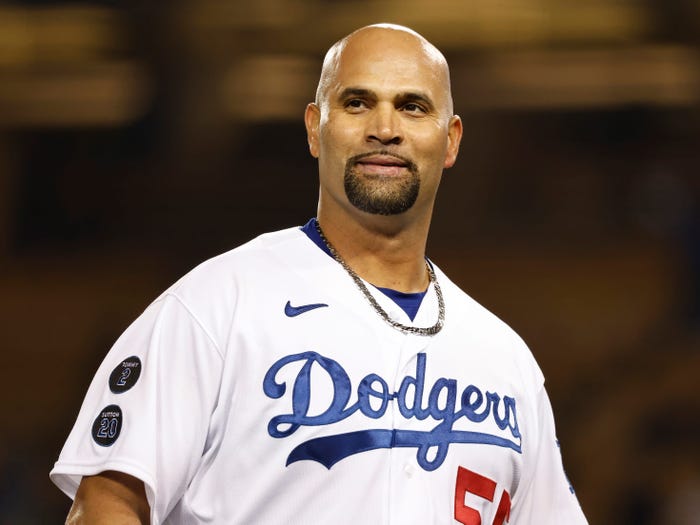 Born in Santo Domingo, Dominican Republic, January 16, 1980, he moved to New York City with his father and grandmother at age 16. Albert witnessed a shooting at a grocery store and, fearing for their safety, the family moved to Independence, Missour, two months later to join relatives. Pujols, who did not speak any English, joined the baseball team at Fort Usage High School. As a senior, opposing coaches walked him 55 of the 88 times he came to the plate, yet he hit eight home runs in those 33 official at bats, including one that travelled 450 feet. He graduated high school one semester early in December 1988 and accepted a baseball scholarship to Maple Woods Community College—alma mater of legendary baseball manager Casey Stengel–in Independence, located in northern Kansas City. Pujols played shortstop in his first college game, turning an unassisted triple play and hitting a grand slam. He only played one season for the Centaurs, batting .461 with 22 home runs before declaring himself eligible for the Major League Baseball draft.

Major league scouts were uncertain about Albert Pujols, including his age, what position he would play, and his build. He was not drafted until the 13th round, when the St. Louis Cardinals selected him with the 402nd overall pick. The Cardinals assigned him to the Peoria Chiefs, their single-A affiliate in the Midwest League, at the start of the 2000 season. He played third base and batted .324, with 17 home runs, 32 doubles and 84 RBI in just 109 games. He finished the season in the top-10 in average, doubles, triples, home runs and RBI and was named Midwest League MVP. Pujols was promoted to the Carolina League, where he collected 23 hits and 10 RBI while playing 21 games for the Potomac Cannons before being sent to the Memphis Redbirds of the AAA Pacific Coast League for their late-season pennant drive. Pujols appeared in three regular season games and batted .367 while helping the Redbirds win their first PCL title. He capped his first season in professional baseball—one in which he took an express ride through the entire Cardinals minor league system—by being named MVP of the PCL’s postseason tournament.

In spring training of 2001, Cardinals’ veteran slugger Mark McGuire told manager Tony LaRussa that if he did not put Pujols on the roster, “it might be one of the worst moves of your career.” Pujols made the club and started on Opening Day, collecting a single off Colorado Rockies left-hander Mike Hampton. Four days later, he had three hits—including his first big league home run—and went on to one of the best rookie performances in MLB history [.329 BA, 37 HR, 130 RBI]. Pujols became the first Cardinals’ rookie to make the All-Star Game, won the NL Silver Slugger Award for third baseman and was unanimously voted NL Rookie of the Year. In 2002, he moved to left field and became the first player in major league history to hit over .300 with at least 30 home runs, 100 runs scored, and 100 RBI in his first two seasons. The following year, Pujols clouted his 100th career homer, a game-winner over the Los Angeles Dodgers, and hit 43 home runs while batting a league-leading .359. Pujols moved to first base for the 2004 campaign and won the Silver Slugger Award, the third position at which he won the award. By his fifth season, many fans considered Pujols the best Cardinal since the great Stan Musial as he won his first NL MVP award. He hit 49 home runs in 2006—20 of them game winners—and won the NL Gold Glove Award while leading the Cardinals to a World Series title. In Game 3 of the 2011 World Series, Pujols joined Babe Ruth and Reggie Jackson as the only players to hit three home runs in a World Series game as St. Louis won their second and final title of the Pujols era. “El Hombre” signed with the Los Angeles Angels of Anaheim as a free agent prior to the 2012 season and appeared in 153 games. He struggled with injuries in 2013 and played in fewer than 100 games for the first time in his career. Mr. Pujols bounced back to hit his 500th career homer in 2014 and hit 40 home runs in 2015, the seventh time he hit 40 or more in a season.

Albert Pujols is a hitter who combines contact, patience and power. He is a six-time Silver Slugger winner, two-time Gold Glove Award winner and has been named to ten All-Star teams. Pujols has won two World Series, has won batting and RBI titles and is a three-time NL MVP. He is the third-youngest player in MLB history to hit 500 career home runs and is the fifth player ever to collect 2,500 hits and 500 home runs while maintaining a .310 lifetime batting average. Albert Pujols has played in 2,274 major league games over 15 seasons. In that time, his career batting average has only dipped below .300 once—in April of 2001, during his first week in the big leagues. Baseball “experts” thought 419 players were better than Albert Pujols in the 1999 Major League draft. I wonder if they still agree?