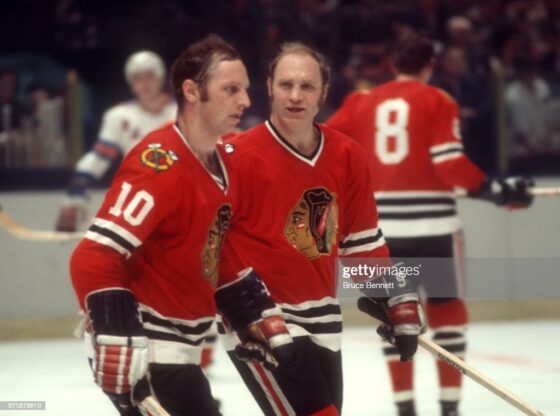 The Daily Dose is a family publication, and today we celebrate families.  In the past several months, we have featured many sporting relatives, including the Andretti’s, Alou’s, Unser’s, Molina’s, Zeller’s, and Matthews.  In November 2017, we even featured a Fathers and Sons edition.

Here are some of the most accomplished sibling duos in sports history.

Bobby and Dennis Hull.  Bobby Hull is the greatest left-winger in NHL history.  The Golden Jet could skate 30 miles per hour and his slapshot – once clocked at nearly 120 mph – was the hardest in the league.  However, that honor may have belonged to younger brother Dennis, who may have possessed the most wicked one-timer in hockey.  Bobby collected the most prestigious trophies the NHL has to offer, including the Art Ross, Hart, Lady Byng, Lester Patrick, and the 1961 Stanley Cup.  Dennis – the Silver Jet – was a five-time All-Star who scored over 300 goals in 14 NHL seasons.  Bobby Hull is the Chicago Blackhawks’ all-time leading goal-scorer, while Dennis is sixth on that list.

Peyton and Eli Manning.  The first overall pick of the 1998 NFL Draft, Peyton helped transform the hapless Indianapolis Colts into a perennial playoff contender.  A five-time league MVP, Peyton set dozens of NFL records, including most career passing yards and touchdowns.  Baby brother, Eli, started 210 straight games from 2004 to 2017, the second-longest streak by a quarterback in league history.  A four-time Pro Bowler and winner of two Super Bowls [he was MVP of both], Eli was named 2016 Walter Payton NFL Man of the Year.

Tom and Dick Van Arsdale.  After being selected in the second round of the 1965 draft, these identical twins were named to the NBA All-Rookie Team in 1966.  One of the best free throw shooters of his era, Tom holds the NBA record for most career games [929] and points [14,232] without making a playoff appearance.  As the Phoenix Suns’ first pick of the 1968 expansion draft, Dick is known as The Original Sun.  The Van Arsdales each played a dozen NBA seasons and were named to three All-Star teams.  They played on the same team only once –  the Suns — in their final season of 1976-77.

Joe and Dom DiMaggio.  If his older brother, Joe, wasn’t a baseball immortal, Dom DiMaggio would be a household name.  A superb outfielder, The Little Professor played 11 seasons, all with the Boston Red Sox.  Dom batted .300 four times, played in seven All-Star games, and led the AL in runs, triples and stolen bases.  A nine-time World Series champ, Joltin’ Joe was one of the greatest ballplayers to ever to grace the diamond.  The three-time MVP led the American League in batting, home runs and RBI during his brilliant hall of fame career.

Phil and Tony Esposito.  Phil was a goal scorer.  His kid brother was a netminder.  Phil led the NHL in scoring five times and won two Stanley Cups.  Hockey’s all-time leader in game-winning goals, the elder Espo was a two-time MVP and first player to score 1,000 points in a decade.  Tony won a Stanley Cup, was named 1970 NHL Rookie of the Year, and earned three Vezina Trophies as the league’s top goaltender.  Both ended up in the Hockey Hall of Fame and were listed among the 100 Greatest Players in NHL History during the league’s centennial celebration in 2017.

Sterling and Shannon Sharpe.  Two of the most prolific receivers in football history had very different pro careers.  Sterling’s was meteoric but cut short by injury.  In seven seasons, he led the NFL in receptions three times and receiving yards twice.  Sterling played in five Pro Bowls and landed in the Green Bay Packers and college football halls-of-fame.  Shannon played twice as long as his older brother, winning three Super Bowls during his 14-year NFL career.  The first tight end to amass over 10,000 receiving yards, Shannon was named to the NFL’s 1990s All-Decade Team and was inducted into the Pro Football Hall of Fame in 2011.

Bernard and Albert King.  A three-time SEC Player of the Year at Tennessee, Bernard played 14 NBA seasons.  He led the league in scoring in 1985 and was a four-time All-Star despite suffering a horrific knee injury at the peak of his career.  In 2013, Bernard was inducted into the Naismith Hall of Fame.  Albert is one of the greatest high school hoopsters of all time.  As a prep senior, he was rated higher than Magic Johnson.  After being named 1980 ACC Player of the Year at Maryland, Albert became the 10th pick of the 1981 NBA draft.  In 2002, Albert King was named to the ACC 50th Anniversary All-Time Team.

Venus and Serena Williams.  In 2002, the Williams Sisters were both ranked number one in the world.  That February, Venus held the top spot.  By July, she had been overtaken by her younger sister.  Serena burst onto the scene as a 14-year-old in 1994.  Venus arrived one year later.  Their power and athleticism changed women’s tennis.  With seven grand slam titles, including five at Wimbledon, Venus is 12th on the all-time list.  Winner of 23 grand slam singles titles, Serena is the greatest female tennis player ever to pick up a racket.  Venus has won over $ 40 million in prize money in her career.  Only Serena, with over $85 million in prize money, has earned more.

Melvin and Justin Upton.  The Uptons are the only two brothers in MLB history to be selected number one and number two [in separate years] in the amateur draft.  Older brother Melvin [formerly B.J.] played 13 big league seasons, while Justin is currently in his 12th year.  The Uptons are the first brothers to join the 20-20 Club [20 homers and 20 stolen bases in the same season].  Justin is a four-time All-Star and has earned three Silver Slugger Awards.  The brothers have combined for over 2,700 hits, 420 home runs and 1,400 runs-batted-in.

Cheryl and Reggie Miller.  Reggie is the greatest Indiana Pacer of all time.  A five-time All-Star and 1996 Olympic gold medalist, he retired as the all-time NBA three-point leader.  But the Knick Killer is only the second-best basketball player in his family.  That honor goes to older sister Cheryl, who is the GOAT of women’s basketball.  A four-time All-American at USC, Cheryl led the Trojans to two national titles and the U.S. Women’s team to 1984 Olympic gold.  The three-time Naismith Player of the Year landed in the Basketball Hall of Fame in 1995, where her brother Reggie joined her in 2012.