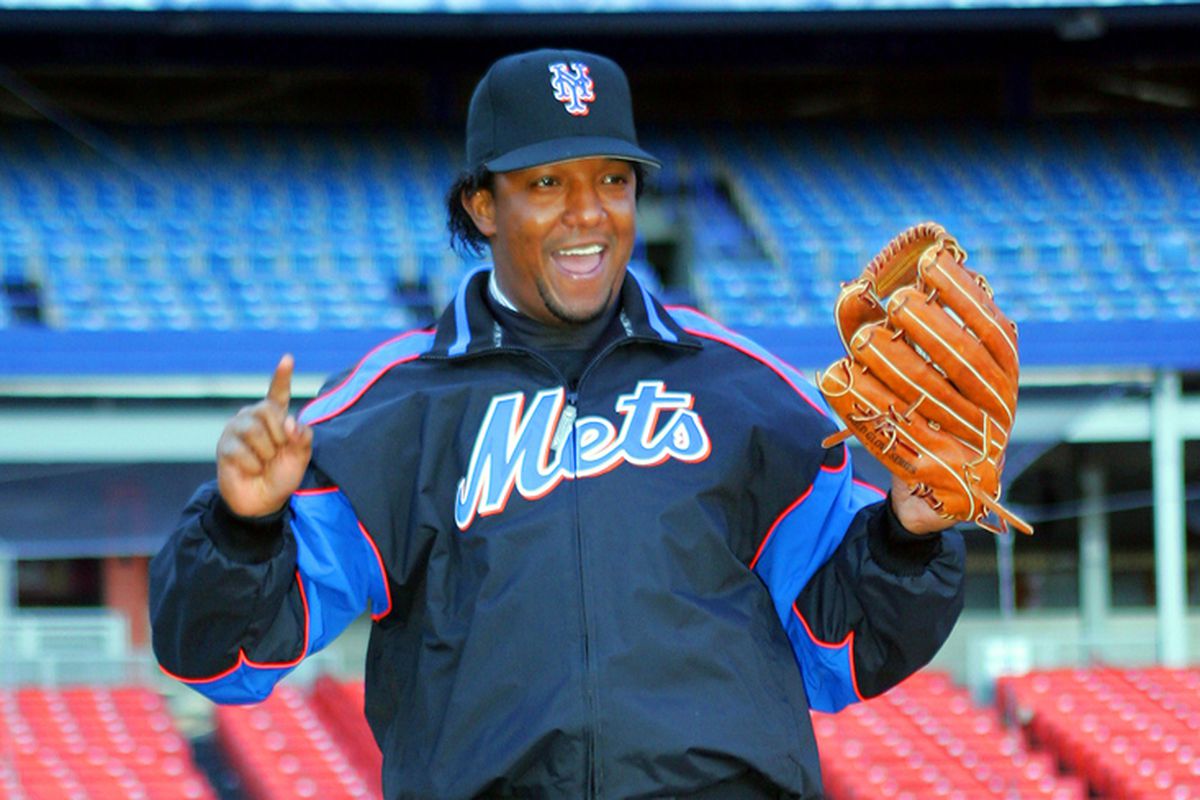 Pedro Martinez is the greatest Latin-American starting pitcher ever to toe the rubber.  He was a dominant pitcher in an era dominated by hitters.  Pitching at the height of MLB’s Steroid Era, Martinez won three Cy Young Awards in a four-year stretch.  Featuring a fastball that touched the high 90s, devastating breaking pitches and a highly effective change, Petey was nearly unhittable.

Despite his small stature [5’11, 170], Martinez exhibited a rare combination of power and command.  Considered by many too small to be an effective starter, he pitched with a chip on his shoulder, turning adversity into advantage.  The first Latin-American pitcher to top 300 strikeouts in a season and 3,000 in a career, Martinez had a career mark of 212-100.  An eight-time All-Star, his .687 career winning percentage is sixth-best all time.

Pedro won the Cy Young Award in both leagues, earning three total.  He finished second in Cy Young voting twice and finished third and fourth one time each.  Martinez had overpowering stuff.  In 1999, he became just the eighth pitcher in history to post two 300-strikeout seasons, and set a new mark [since broken by Randy Johnson] with 13.2 strikeouts-per-nine-innings.  For his career, the dominating Dominican averaged 10.04 strikeouts-per-nine-innings, third all-time behind Johnson and Kerry Wood.

Martinez also possessed pinpoint control.  In 18 big league seasons, the right-hander threw more than 2,800 innings, issuing an average of just 58 walks per year. Pedro had eight seasons in which he threw more than 200 innings.  In those seasons, he averaged 256 strikeouts while issuing only 52 bases on balls.  In his two best seasons — 1999 and 2000 — Martinez walked only 69 batters in 430 innings of work.  He struck out 597 during that span, amassing an incredible strikeout-to-walk ratio of 8.67 [for a pitcher, striking out two batters for every walk allowed is good.  Three strikeouts for each walk issued is considered superb].  Over the course of his 18-year career, Martinez posted a strikeout-to-walk ratio of 4.14, third-best in MLB history.

WHIP [walks plus hits per inning pitched] is a measurement of the number of baserunners a pitcher allows.  The lower the number, the better.  In 2000, Pedro Martinez recorded the lowest single-season WHIP in major league history [0.7373] while pitching in Fenway Park, the most hitter-friendly ballpark of all time.  Martinez has a better career WHIP than Walter Johnson, Christy Matthewson, and Sandy Koufax.  In fact, only two starters in the Live Ball Era [post 1920] – Clayton Kershaw and Chris Sale — have posted a better career WHIP [1.054] than El Grande.  No starter in the Live Ball Era has a career WHIP under 1.00, yet Martinez bettered that mark in six of nine seasons between 1997 and 2005.

Born in Manoguayabo, a hardscrabble village on the outskirts of the Dominican Republic’s capital city of Santo Domingo, on this date in 1971, Pedro Jamie Martinez is the fifth of sixth children.  His family grew up poor, living in a one-room house with a tin roof and dirt floors.  In 1984, Pedro’s older brother, Ramon, signed with the Los Angeles Dodgers.  Four years later, Petey joined the Dodgers.  By 1990, Ramon Martinez was a 20-game winner in the big leagues, while Pedro had become a top Dodgers prospect.  He made his big league debut at 20, pitching two scoreless innings of relief against the Cincinnati Reds.  Martinez spent the 1993 season as the Dodgers setup man, leading all NL relievers in innings pitched.

With the Dodgers in need of a second baseman, Martinez was dealt to the Montreal Expos in exchange for Delino DeShields following the 1993 season.  He blossomed in Montreal.  In June 1995, he threw nine perfect innings against the San Diego Padres before giving up a hit in the bottom of the 10th [Martinez was removed from the game but got the win].  The wispy right-hander exploded onto the scene in 1997, going 17-8 with a NL-best 1.90 ERA and 13 complete games.  Martinez struck out 305 batters en route to his first Cy Young Award, which he gave to Juan Marichal, a Latin pitching legend who made ten All-Star appearances with the San Francisco Giants in the 1960s and 70s but never won the award.

Fearful they would lose him to free agency, Montreal traded Martinez to the Boston Red Sox after the 1997 season.  He quickly became the most dominant pitcher in the American League, putting together one of the finest two-year stretches in baseball history.  In 1999, Martinez went 23-4 with a 2.07 ERA.  He recorded 313 strikeouts, won pitching’s Triple Crown  and earned his second Cy Young Award.  The following season, Martinez issued only 32 walks in 217 innings, posted a career-best 1.74 ERA and won his third Cy Young Award in four seasons.

Martinez helped the Red Sox end 86 years of frustration when Boston won the 2004 World Series title.  He finished second in strikeouts and was fourth in Cy Young voting.  In seven years in Boston, Martinez went 117-37, the highest winning percentage by any pitcher with one team in baseball history.  Prior to the 2005 season, he signed a four-year, $ 53 million contract with the New York Mets.

In his first season in New York, El Grande led the NL in WHIP, the sixth time he had accomplished that feat.  He was twice named an All-Star with the Mets, but leg injuries and a torn rotator cuff limited his effectiveness.  He recorded his 3,000th career strikeout in 2007, becoming only the third 3K strikeout pitcher to have more strikeouts than innings pitched.  Martinez joined the Philadelphia Phillies in 2009.  In September of that year, he won his 100th NL game, becoming the tenth pitcher to win at least 100 games in both leagues.  After helping the Phillies to the 2009 World Series, where they lost to the New York Yankees in six games, Pedro Martinez retired.