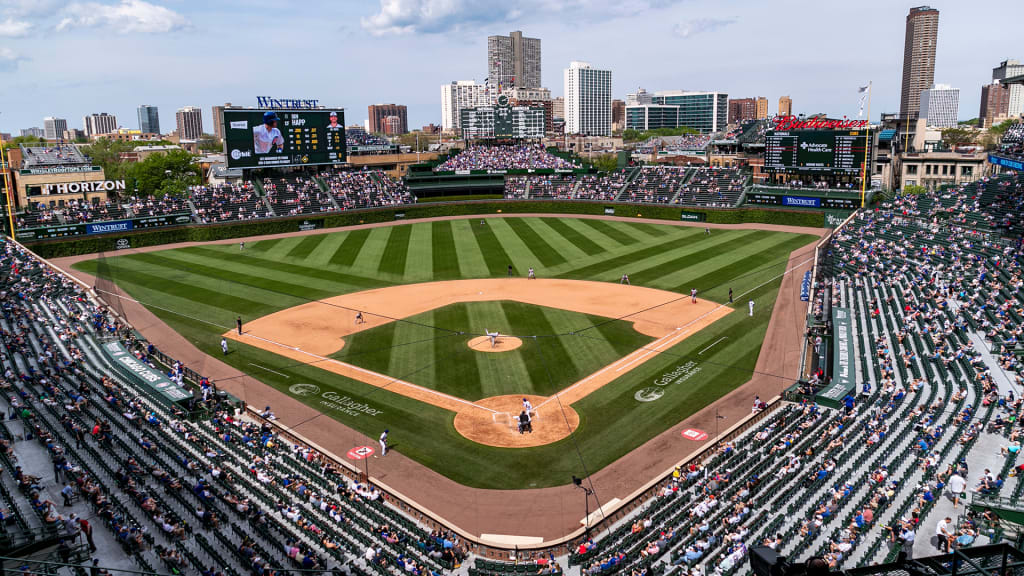 Wrigley Field is one of America’s national treasures.

Built in 1914, Wrigley Field is the second-oldest ballpark in the major leagues, behind Fenway Park, which opened two years prior.  The Friendly Confines has been the scene of some of the most famous moments in sports.  In 1917, Chicago’s Hippo Vaughn and Cincinnati’s Fred Tomey engaged in a pitching duel that saw both hurlers throw no-hitters through nine innings, before the Red Leg’s  Jim Thorpe [yes, that Jim Thorpe] drove in the only run of the game in the 10th.  Wrigley is the site of Babe Ruth’s “Called Shot,” when Ruth allegedly pointed to the bleachers during Game 3 of the 1932 World Series then hit Charlie Root’s next pitch for a homer.  It’s where Gale Sayers ran for six touchdowns in the mud as a rookie in 1965 and where Ernie Banks – “Mister Cub” – hit his 500th career home run in 1970.  Wrigley gave us Kerry Wood’s 20-strikeout affair in 1998 and has played host to three MLB All-Star Games.

Originally known as Weeghman Park, the stadium was built on grounds once occupied by a seminary.  Owned by Charles H. Weeghman, whose Chicago Whales played in the Federal League, the park was built for $ 250,000 and seated 14,000.  The first major league game held at the park took place April 23, 1914, when the Whales beat the Kansas City Packers, 9-1.  When the Federal League folded after the 1915 season, Weeghman bought the National League’s Chicago Cubs and moved them into his two-year-old ballpark.  The venue became known as Cubs Park in 1920 after chewing gum magnate William Wrigley Jr. purchased the Cubs from Weeghman.  It was named Wrigley Field in honor of the owner in 1926.

Located at 1060 W. Addison Street, the ballpark is situated in the Wrigleyville area on Chicago’s north side.  Designated a Chicago landmark in February 2004, Wrigley Field features an iconic red marquee over the main entrance at the intersection of Clark and Addison Streets.  Plopped in a residential neighborhood with no parking lots, Wrigley – along with Fenway Park – is the most charming baseball venue in America.  The original centerfield scoreboard – which is turned by hand – remains intact.  High atop the scoreboard sits a nautical-style mast , from which flies the flags of each National League club, arranged by division and team order in the standings.  After every game, a flag flies providing the result of the most recent Cubs game.  A white flag with a blue “W” indicates a Cubs victory, while a blue flag with white “L” denotes a loss.  The playing surface, which sits 600 feet above sea level, is a blend of Merion Bluegrass and clover.

Wrigley Field was the home park for three NFL teams.  The Hammond Pros played there from 1920 to 1926, and the Chicago [now Arizona] Cardinals called Wrigley home from 1931 to 1939.  For nearly 50 years, the Chicago Bears played at Wrigley Field.  The Monsters of the Midway moved to their current home at Soldier Field  in 1971.  The venerable ballpark has hosted college football, NASL soccer, and hockey.  On New Year’s Day 2009, the Chicago Blackhawks skated against the Detroit Red Wings in an Original Six Winter Classic at Wrigley.  The stadium has also held several concerts, including performances by Jimmy Buffet, Elton John, Paul McCartney, Bruce Springsteen and Jason Aldean.  In July 2013, Ernie Banks joined Pearl Jam front man Eddie Vedder on stage at Wrigley.  As the effervescent Mr. Cub, Banks was famous for proclaiming, “Let’s play two!”  While performing well into the night that evening, Vedder suggested to the audience, “Let’s play ‘til two!”

The stadium, now in its second century, has also appeared in several films, including Blues Brothers, Ferris Bueller’s Day Off, The Breakup, and A League of Their Own.

Depending on the wind, which blows off Lake Michigan [less than a mile to the east], Wrigley Field can either be one of the friendliest parks in the major leagues for pitchers, or among the worst.  When it is blowing in, as it normally does, potential home runs become outs.  When the wind blows out, as it can during warm summer months, Wrigley Field can produce tape-measure homers.  The small amount of ground in foul territory favors the batter, but Wrigley Field has produced eight no-hitters, including Toney’s gem in 1917.  No batter has ever hit the centerfield scoreboard, but Sam Snead once clipped it with a golf ball using a two iron.

Throughout its history, the dimensions of the Friendly Confines have remained unchanged.  Center field sits 400 feet from home plate and left-  and right-center are 368 feet away.  Although the power alleys are relatively cozy, the foul lines [355 in left, 353 in right] are currently the deepest in the major leagues.  The jewel-box design seats 41,269, although 47,101 –the largest crowd ever to see a game at Wrigley Field – turned out to see Jackie Robinson first play at Wrigley in May 1947.  Fans watch from outside the stadium as well, as patrons cram the seats of the Wrigley Rooftops that adorn the buildings beyond the left and right field walls.

The brick outfield wall, which stands 11 ½ feet high, is covered with ivy.  The original vines, planted by Bill Veeck in September 1937, were English Ivy, but the plants were later changed to Boston and Japanese Bittersweet strains as they better endure harsh Chicago winters.  A basket was affixed to the top of the outfield wall in 1970.  Balls hit into the basket are counted as home runs.  Behind the outfield wall sit the bleachers.  Constructed in 1937, they house Chicago’s famous Bleacher Bums and are one of greatest spots in the world for watching baseball.  Bordering the bleachers are Waveland Avenue, where fans race to collect home run balls that have flown over the left-field stands, and Sheffield, which runs outside the bleachers in right.  Several Cub greats are immortalized by flags which fly from the foul poles.  Ernie Banks’ number 14. Ron Santo’s 10, and Fergie Jenkins’ 31 are affixed to the right-field pole, while Billy Williams’ 26, Ryne Sandberg’s 23 and Greg Maddux’ 31 are in left.  Statues of long-time Cubs broadcaster Harry Caray, Banks, Williams and Ron Santo are located outside the stadium.

After breaking ground in March 1911 and opening just over three years later, Wrigley Field has undergone several changes.  An upper deck was added in 1927.  Lights were scheduled to be installed in 1942, but after the Japanese attack on Pearl Harbor, Mr. Wrigley donated the materials to the war effort.  Lights were finally added in 1988 and, in August of that year, the Cubs became the last of the Original 16 teams to play home night games.  The 1060 Project – a multi-year expansion project launched in 2014 — includes several of the most significant changes in the historic ballpark’s history.  Bullpens have been moved beneath the bleachers — where pitchers are now out of sight — and new videoboards have been added in left and right field, disrupting the intimacy of Wrigley Field while also potentially affecting wind patterns.

The venerable stadium is where the “Bartman Game” took place.  Sitting along the left field foul line, Cubs fan Steve Bartman intercepted a potential Moises Alou catch in the eighth inning of Game 6 of the 2003 NLCS.  Chicago was leading 3-0 and holding a 3 games to 2 lead.  If Alou had caught the ball, it would have been the second out of the inning.  Instead, in one of the most epic meltdowns in baseball history, the Cubs surrendered eight runs in the inning and lost the game, 8-3.  The following day, they were eliminated in Game 7.  For over a decade, Mr. Bartman was unjustly vilified by Cubs fans for his role in the collapse.  In July 2017, Bartman was awarded an official 2016 World Series ring as a gift from the Chicago Cubs.

On this date in 2015, the Chicago cubs downed the St. Louis Cardinals, 6-4, in Game 4 of the NLDS at Wrigley Field.  It was the first time in franchise history that the Cubbies clinched a postseason series at home