The 12 Worst-Dressed Coaches in College Basketball 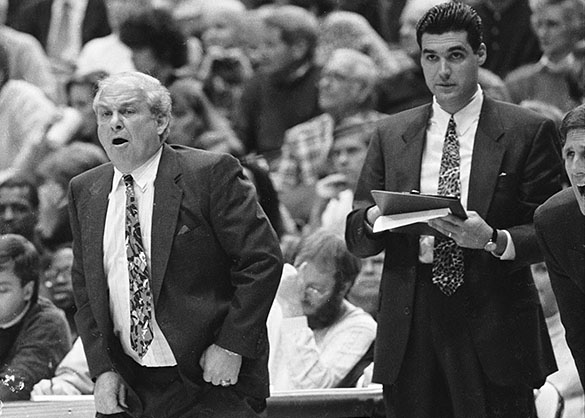 College basketball coaches patrol the sidelines in a variety of styles.  From Roy Williams to Jay Wright, many a mentor has displayed sartorial splendor from the bench.

But some have not.  Today we examine the worst-dressed coaches in the game.  College hoops’ walking fashion faux pas.  Who let these guys ever leave the locker room in these outfits?

The son of a legendary high school coach in Ohio, Bob Huggins stopped trying years ago.  At one point at the University of Cincinnati, Huggy Bear failed to graduate a single player, posting a graduation rate of zero-point-zero.  Following two heart attacks and a 2004 DUI conviction, Huggins changed his ways, going from garish suits to a windbreaker pullover and pants.  He may be the worst-dressed coach ever to walk into a gym.  “I’m on the downhill…I’ve been doing this a long, long time and I’m going to be comfortable.”

Having assisted “Huggy Bear” for one season at Cincinnati, Frank Martin comes by it naturally.  Although he gives it a bit more effort than Huggins, nobody is going to confuse this former bouncer’s duds with those of Kansas’ Bill Self any time soon.

A slick coach in a dirty business, Bruce Pearl will do anything to get noticed.  Before getting fired at Tennessee for lying to the NCAA, he painted his chest orange.  On his first day at Auburn, he jumped into a mosh pit.  Pearl is certainly no gem, and his clothing choices are suspect, earning him a spot on the worst-dressed coaches list.

If it weren’t for bad style, Notre Dame head coach Mike Brey would have no style at all.  Brey is the winningest coach in Irish history, but he’s a far cry from Digger Phelps when it comes to looking sharp on the sidelines.

Now in his 34th season at Oakland University, Greg Kampe is the third most-tenured head coach in Division I basketball.  Unlike Mike Krzyzewski, who is number two on that list, Kampe cramps our sense of style.

Despite assisting the legendary Al McGuire for three seasons at Marquette, Rick Majerus never developed a taste for fashion.  And the longer he coached, the worse it got.

Before becoming the head man at Loyola of Chicago, Porter Moser assisted Majerus at St. Louis.  A master at mixing multiple patterns concurrently, Moser is a disastrous dresser.  We expected more from a Benet Academy grad.

Desperate to remain relevant, the shameless Rick Pitino underwent a facelift.  In 2003, he had a tryst with the wife of one of his staffers.  At Louisville, he spent thousands of dollars on escorts for players and recruits.  But Pitino’s biggest gaffe may be the day he chose to don this outfit.

Hall of famer Lou Carnesecca coached St. John’s to 526 wins over 24 seasons.  We loved watching Looie work his magic on the sidelines, but the sweaters were atrocious.

As a player at Indiana, Steve Alford looked regal in red.  As head coach at New Mexico, not so much.  Memo to Steve: leave the red blazers to St. Louis Cardinals greats like Bob Gibson and Lou Brock.