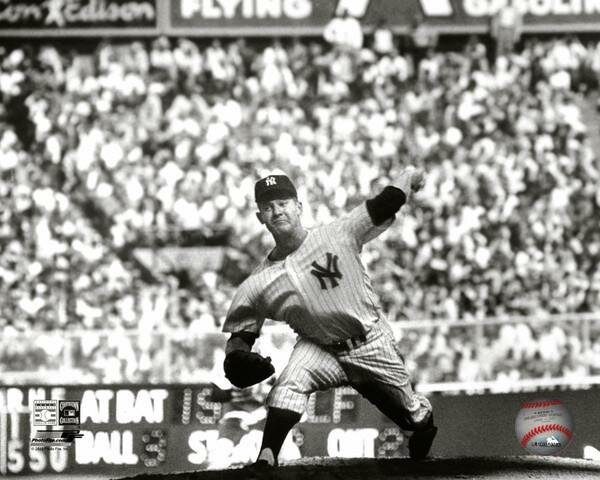 Edward Charles Ford was born in New York City on this date in 1928, but grew up in the Astoria neighborhood in Queens, the childhood homes of Chamique Holdsclaw [Daily Dose, 8/9/16] and Al Oerter [Daily Dose, 9/19/16].  After graduating from Manhattan High School of Aviation Trades, he was signed by the New York Yankees as an amateur free agent in 1947.  Nicknamed “Whitey” due to his light blond hair, Ford rose quickly through the minor leagues and made his big league debut July 1, 1950.  He won his first nine decisions and, despite throwing only 112 innings, was named 1950 AL Rookie of the Year by the Sporting News.  After serving in the Army during the Korean War in 1951 and 1952, Ford returned to the Yankees, where he rounded out the “Big Four” pitching staff of Allie Reynolds, Vic Raschi and Eddie Lopat.  Ford quickly became the Yankees’ ace.  In 1955, he led the AL in wins; in 1956, in ERA and winning percentage; in 1958 ERA; and in wins in both 1961 and 1963. Ford had an average fastball but pinpoint control.  He twice struck out six batters in a row and, in 1955, tossed two one-hitters.  Ford played his entire career—16 seasons—for the Yankees and his best may have been in 1961, when he went 25-4 to win the Cy Young Award [Daily Dose, 7/6/16].  He continued his brilliance in the postseason, pitching 14 shutout innings to lead New York to a world championship while being named World Series MVP.  A lefty, Ford was superb at holding baserunners.  In 1961, he set a record by pitching 243 consecutive innings without allowing a stolen base. Nicknamed the “Chairman of the Board” due to his ability to remain calm and collected under pressure, Ford was at his best in the postseason.  He was named the Game One starter in eight World Series, including a record four in a row between 1961 and 1964.  Ford won ten World Series games in his career, more than any pitcher in history and, in 1961, broke Babe Ruth’s [Daily Dose, 9/24/15] Series record of 29 and two-thirds consecutive scoreless innings.  It would eventually reach 33.66.  The Yankees won nine pennants and six world championships with Whitey Ford.  He is the winningest pitcher in franchise history, having won 236 career games in pinstripes.  Ford started 438 games completing 156.  He holds World Series pitching records for most wins, games, starts, innings, hits, walks and strikeouts.

At the heart of baseball is great pitching, and at the heart of baseball’s greatest dynasty is Edward Charles Ford, who won a higher percentage of decisions [.690] than any pitcher of his era.  In the wake of Yogi Berra’s passing in 2015, Whitey Ford is now the greatest living Yankee.  He has a plaque in Yankee Stadium’s Monument Park [Daily Dose, 10/20/16],  had his Number 16 retired by the Yankees, and was inducted into the Baseball Hall of Fame in 1974 alongside his former teammate and best friend, Mickey Mantle. Donald Zackary Greinke [GRAYN-kee] was born in Orlando, Florida, on this date in 1983, to parents who were both schoolteachers.  He played tennis and golf, but baseball was his best sport.  In 1999, he helped his team to the Senior [age 13 to 16] League World Series title.  Greinke played shortstop as a freshman at Apopka High School and pitched in relief as a sophomore and junior.  He became a starting pitcher in his senior season, going 9-2 with a miniscule 0.55 ERA.  The hard-throwing right-hander held opponents to a .107 batting average while striking out 118 in 63 innings of work.  After leading Apopka to their third consecutive district title, Greinke was named 2002 Gatorade National Player of the Year, joining past winners Gary Sheffield, Alex Rodriguez, Justin Upton and Clayton Kershaw. He turned down a scholarship to Clemson University in order to play for the Kansas City Royals, who had selected the 6’2”, 200-pounder with the sixth selection of the 2002 amateur draft, one spot ahead of Prince Fielder.  After rising from Rookie League to the Triple-A Pacific Coast League in just two years, Greinke made his big league debut with the Royals on May 22, 2004.  Facing Barry Zito and the A’s in Oakland, Greinke got a no decision after giving up two runs on five hits in five innings of work.   At 20, he was the youngest player in the majors.  Greinke recorded his first career win June 8, when he pitched seven scoreless innings against the Montreal Expos [now Washington Nationals].  Two days later, he collected his first major league hit—a home run—off Russ Ortiz [Greinke batted over .400 with 31 homers in high school]. Greinke missed much of the 2006 season while suffering from social anxiety disorder and depression.  He returned to the Royals the following year.  In 2009, he was named to the All-Star Team, led the league in ERA and earned the AL Cy Young Award.  He requested a trade after the 2010 season and was dealt to the Milwaukee Brewers, where he played in 2011 and half of 2012.  Milwaukee sent him to the Angels before the trade deadline in July 2012.  In late September, he became the first pitcher since 1920 to record 13 strikeouts in five innings or fewer.  After the season, Greinke signed with the cross-town rival Dodgers.  In his first year as a Dodger, Greinke was named to the All-Star Team for the second time in his career.  He also won his first Gold Glove Award.  He replicated the feat in 2015 while also leading the league in ERA. Greinke signed with the Arizona Diamondbacks prior to the 2016 season, recording his 2,000th career strikeout in August 2016.  The lanky right-hander features six different pitches and has amassed more than 155 major league wins in 13 big league seasons.