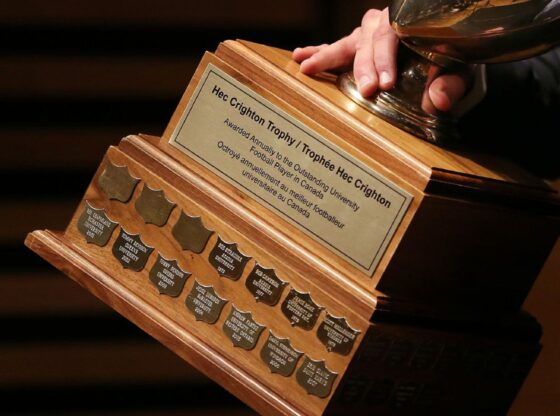 The Hec Crighton Trophy is the most prestigious award in Canadian college football.

Awarded annually since 1967, the Hec goes to the most outstanding university football player in Canada.  Named after the late Hec Crighton, a legendary teacher, coach, referee and author, the award is U Sports football’s top honor.

Hector Naismith Crighton was born in Toronto April 2, 1900.  A fine athlete, Crighton played college basketball and football, and won a national diving championship in 1920.  After graduating the University of Toronto, Crighton earned a Master’s at the University of Wisconsin.  He coached 35 seasons of high school football in Canada, and rewrote the rule book in 1952.  A former wing commander in the RCAF, Crighton served as a college football referee for 20 years and worked 16 Gray Cups – the Super Bowl of the Canadian Football League.

Crighton was instrumental in the development of the Canadian College Bowl [now called the Vanier Cup].  First played in 1965, the Vanier Cup features the top team from each of U Sports football’s four conferences.  Following his death in 1967, the Hec Crighton Trophy was established to recognize the best player in Canadian college football.

The inaugural Hec went to Mike Eben, a speedy receiver for the Toronto Varsity Blues.  Teammate Mike Raham, a Varsity Blues running back, was awarded the trophy the following year.  Like the Heisman Trophy in the United States, the Hec Crighton almost always goes to an offensive skill-position player.  The lone exception came in 1974, when Acadia Axemen free safety Al Charuk earned CIS football’s top prize.

Five Hec Trophy recipients have been receivers, while 15 running backs – including 2017 winner Ed Ilnicki – have hoisted the award.  Ilnicki, a shifty halfback for the Alberta Golden Bears, ended a decade-long streak of quarterbacks winning the Hec Crighton Trophy.  Signal callers have won 30 of the 51 Hecs awarded since 1967.

Western University in London, Ontario, has produced the most Hec Crighton award winners.  The first Mustang to win the trophy was quarterback Jamie Bone, in 1978.  Two years later, running back Greg Marshall won the Hec.  In 1986, Blake Marshall – Greg’s younger brother – garnered the trophy.  Greg Marshall is currently the head coach at Western.  He has led his alma mater to 17 conference championships and three national titles.  The second overall pick in the 1987 CFL draft, Blake Marshall led the Edmonton Eskimos to a Grey Cup title as a rookie.  In 1991, he was named Most Outstanding Player in the CFL.

St. Mary’s quarterback Chris Flynn is the only three-time recipient of the Hec Trophy.  The Quebec native and 2011 Canadian Football Hall of Fame inductee claimed the award in 1988, 1989 and 1990.  Five players – Tim Tindale, Eric Lapointe, Tommy Denison, Erik Glavic and Andrew Buckley – have each won the Crighton award twice.  Glavic, who earned the honor with St. Mary’s in 2007 and Calgary in 2009, is the only CIS football player to have won Canadian football’s most prestigious award with two different teams.

The University of British Columbia has produced three Hec winners, the greatest of whom is 1987 recipient Jordan Gagner.  Born and raised in the Lower Mainland, Gagner took the Thunderbirds to back-to-back national title games in 1986 and 1987.  The most prolific passer in UBC history set single-game, single-season and career yardage records that still stand.  A four-year starter, Gagner twice led Can-West in passing and was 1987 conference MVP.  As a junior, Gagner guided the T-Birds to a thrilling 25-23 win over Western to claim the 1986 Vanier Cup.  A gifted passer, he capped his senior campaign by finishing with 10,187 career yards and winning the 1987 Hec Crighton Trophy in a landslide.

After a stint in the CFL, Gagner earned an MBA and built Wiffen Financial Services, a B.C.-based financial-planning empire.  A member of the UBC and British Columbia Football halls of fame, Gagner was voted the second-greatest player in UBC football history, behind running back Glenn Steele, who led the Blue and Gold to the 1982 Vanier Cup, the first in school history.

The Hec Crighton Trophy is presented each November at the All-Canadian Awards Gala as part of the Vanier Cup festivities.  Hosted by U Sports football, the event includes the announcement of the All-Canadian offensive and defensive teams.  In addition to the Hec Trophy, U Sports football announces its other awards, including the J.P. Metras Trophy to the outstanding down lineman, the President’s Trophy to the best defensive player, the Peter Gorman Trophy to the CIS rookie of the year, and the Russ Jackson Award to the player who best exemplifies academic achievement, football skill and citizenship.