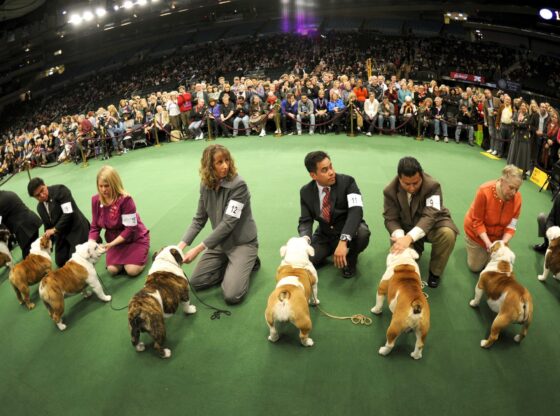 The Westminster Kennel Club (WKC) Dog Show has been around longer than the light bulb, zipper, and automobile.  It is older than the Brooklyn Bridge, Washington Monument and the World Series.  The Westminster Dog Show is the second-longest continuously-held sporting event in the country.  Only the Kentucky Derby, which is one year older than Westminster, has been staged longer.  The event has survived two World Wars, the Great Depression, and a 1946 tugboat strike that nearly paralyzed New York City.

The club got its name from a long-gone hotel in Manhattan, where sporting gentlemen gathered in the bar to tell lies about their shooting exploits.  They eventually formed a club and purchased a training area and kennel, where they kept their dogs.

They named the club Westminster [after their favorite bar] and decided to host a show for gun dogs – Pointers and Setters.  In May 1887, the WKC hosted the first annual New York Bench Show of Dogs at Gilmore’s Gardens (now Madison Square Garden) at Irving Place and 16th Street in Manhattan.

The three-day show, which drew an entry of 1,200 dogs, was such a hit it was extended to four days.  “We question if on any previous occasion has there ever assembled in this city such a number of people at one time, and representing as much of the culture, wealth and fashion of the town,” wrote Forest and Stream magazine.

The first modern dog conformation show was held in Newcastle-upon-Tyne in England, in June 1859, and included only Pointers and Setters.  A quarter-century later, the American Kennel Club was formed.

In addition to serving as a registry for purebred dog pedigrees in the U.S., the AKC promotes and sanctions events for purebreds.  Westminster was the first club admitted to the American Kennel Club upon its founding in 1884.

One of only four events to be held in all four iterations of Madison Square Garden — which has undergone a quartet of redesigns — the Westminster Dog Show has become the symbol of the purebred dog.  Early entries could be traced to such luminaries as General George Custer, the Queen of England, Czar of Russia, and Emperor of Germany.

The most prestigious dog show in the world awards no prize money, and most owners spend tens of thousands of dollars in the year leading up to the competition to get their dogs ready and recognized by the judges.  The purchase price of a purebred pup ranges from $ 1,000 to $ 5,000.  The rarer the breed, the more expensive the dog.

Shows require handlers, travel, and entry fees, but most of the costs go to advertising in the all-breed magazines, which can run from $ 1,500 to $ 1,800 per week.  Mary Weist has been breeding and showing Labradors for the past 50 years.

In 2014, she spent $ 30,000 on a campaign for Baccarat, the top-ranked Lab of the year.  Going into Westminster, the dog was favored to show well, but she didn’t even win her breed.

The 2,800 available entries to the Westminster Dog Show fill the day registration opens.  Since 1992, WKC has invited the top five dogs in each breed to be pre-entered [determined by results from other dog shows the previous year] to assure all top dogs have a chance to compete.

How well dogs conform to their breed standard in appearance, movement and temperament dictates how they will be scored by the judges.

Due to limited space at Madison Square Garden, Breed and Junior Showmanship competitions are held during the day at Piers 92 and 94 in Manhattan, with Group and Best in Show competitions taking place at The Garden in the evenings.

Dogs are required to be on display in a Bench [assigned location] during the show’s entirety except when being shown in the ring, groomed, or taken outside to eliminate.

In the late 1920s a group of dog show exhibitors decided to develop a special competition for children.  The first Children’s Handling class was held at the Westbury show of 1932 and quickly became popular.

Dogs in the Westminster conformation first compete within their own breed, where a Best of Breed is selected.  All Best of Breed winners advance to one of seven groups: Sporting, Hound, Working, Terrier, Toy, Non-Sporting and Herding.

The seven group winners advance to the final competition, where one judge will select one of them as Best in Show.  The Terrier group has produced the most Best in Show winners, while the Herding group has the least.

The most coveted award in the dog show world, Best in Show at Westminster, was first awarded in 1907.  The winner was Warren Remedy, a Smooth Fox Terrier that claimed the prize again in 1908 and 1909.  She remains the only three-time Best in Show winner in the history of Westminster.

Six dogs have won Best in Show twice, most recently Chinoe’s Adamant James – a lovely English Springer Spaniel —  in 1971 and 1972.  In addition to the prestige and notoriety that accompany the award, the Best in Show winner becomes “America’s Dog” for the next year, receives the coveted Pewter Bowl, and gets to ring the opening bell at the New York Stock Exchange.  Rumor, a five-year-old German Shepherd named after the Adele song, “Rumor Has It,” won Best in Show in 2017.

Patricia Trotter has won the Hound group at Westminster eleven times and has claimed about every honor short of Best in Show.  The 81-year-old retired school teacher taught eighth-grade American history for 35 years.  Her first dog was Candy, a Norwegian Elkhound which she showed in 1949.  Trotter, whom the AKC presented with a Lifetime Achievement Award in 2014, showed Best in Show finalist, Duffy, this year.

The Big Apple comes alive during the Westminster Kennel Club Dog Show.  The event sells out Madison Square Garden and has been broadcast live on television since 1948.  Veteran broadcasters Al Trautwig, Lester Holt and Joe Garagiola have all covered the event.

The Empire State Building lights up in purple and gold [official colors of WKC] during the show and many Fifth Avenue department stores feature window displays with dog themes.  This year, more than 700 press credentials were issued to media attending from over 20 countries.