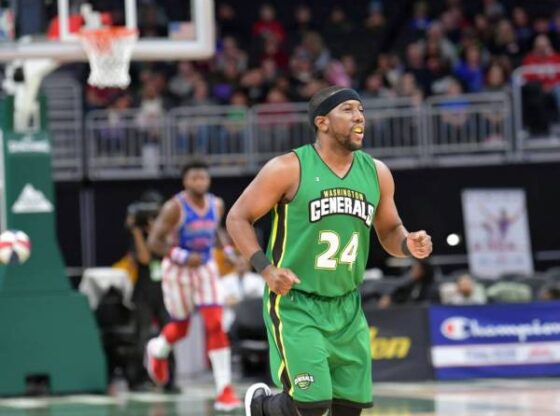 The Washington Generals were the worst sports team of all time.

In 1952, Harlem Globetrotters’ founder and owner Abe Saperstein was looking for a team his Globetrotters could compete against each night as they entertained fans around the world.

Saperstein turned to Louis “Red” Klotz.  Klotz was a standout player who had helped his South Philadelphia High School team to two city titles while twice being named Philadelphia Player-of-the-Year.

After playing collegiately at Villanova, Klotz played for the Philadelphia SPHAS of the American Basketball League before joining the NBA Baltimore Bullets midway through the 1947-48 season.

A 5’-7” sharpshooter, he helped the Bullets defeat the Philadelphia Warriors for the 1948 championship, and remains the shortest man ever to win an NBA title.

Taking Saperstein up on his offer, Klotz put together a team that for six decades served as the Globetrotters’ foil, playing more than 400 games a year.

An army veteran, Klotz named the team the Washington Generals in honor of General Dwight D. Eisenhower, a World War II hero who had just been elected President of the United States.

Playing straight man to one of the most famous sports shows ever invented, the Generals never got the respect they deserved.  With a roster made up of real basketball players – guys that played collegiately – they took pride in what they did.

The Generals once beat the Taiwanese National Team and a squad from the Russian Army, but their job was to make the Globetrotters look like the best team on the planet.

The Washington Generals, who folded in 2015, always lost.  They lost on ships and they lost on aircraft carriers.

They lost in prisons, on indoor basketball courts, and outdoors.  The Generals lost in front of popes, in front of royalty and before dictators and presidents.

They lost on six continents and more than 100 countries.  The Generals lost under water, on ice, on cement, on wood, on grass and on mud.

The franchise had the most honest logo in sports – a tiny white dude flailing aimlessly at a ball that his much taller opponent is holding over his head.

The franchise has been known by several other names, including the Boston Shamrocks, New Jersey Reds, New York Nationals, International Elite, Global Select and World All-Stars, but the Washington Generals – the Green and Gold — will always be their signature name.

Over the years, the Generals had as many as three sets of teams to keep up with their opponent’s globe-trotting schedule.  Despite the varying names and uniforms, the team that served as the Harlem Globetrotters’ punching bag for over six decades was Klotz’s squad.

Prior to January 1971, the Globetrotters had won 2,495 games in a row.  On January 5, 1971 – the same day boxer Sonny Liston was found dead in Las Vegas – the Trotters played the New Jersey Reds in a gymnasium in Martin, Tennessee.

Playing without their captain, Curly Neal, the Globetrotters shot poorly and fell behind late in the game.  A furious Trotters rally tied it, sending the game into overtime.  With seconds left, 50-year-old player-coach Red Klotz sank his patented set shot to beat the Globetrotters, 100-99.

The capacity crowd was dumbfounded and disappointed.  Some children in the stands cried after the loss, prompting Klotz to say, “They looked at us like we killed Santa Claus.”  It was the last time the Generals would defeat their famed nemesis, as the Globetrotters would go on to win their next 8,829 games.

Red Klotz ran the Washington Generals for 35 years before turning the reigns over to his son-in-law, John Ferrari, in 1987.  Mr. Klotz, who shot baskets every day, died in July 2014 at 93.

The following summer, Herschend Enterprises, the new owner of the Harlem Globetrotters informed Mr. Ferrari that they no longer needed the Washington Generals, and dropped their primary opponent after 63 years.

It was a pure cost-cutting measure.  Instead of paying Ferrari to arrange for an opponent, Herschend intended to do it themselves.  Much like the teams he fielded, Ferrari was not even given a chance.  “I got a call and they just told me that that was it,” Ferrari said.  “I turned to my wife [Klotz’ daughter] and just said to her, in disbelief, ‘It’s over.’”

The Generals played their last game against the Globetrotters on August 1, 2015, in Wildwood, New Jersey.  And, yes, the Generals lost.