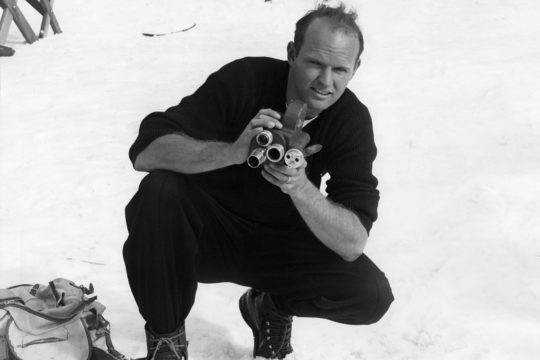 Warren Miller is the godfather of action sports filmmaking.

The best place in the world to ski is where you’re skiing that day.

An American ski and snowboard filmmaker, Miller’s credits include over 750 sports films, several books and hundreds of non-fiction stories.  The founder of Warren Miller Entertainment, he is the most iconic figure in ski movie filmmaking.  Over a span of six decades, Miller produced, directed and narrated over 50 feature-length films.  Known for their photography, narrative humor and broad appeal, Miller’s movies have long enjoyed a global cult following.  His first effort, Deep and Light, was released in 1950.  It began a long-standing tradition of producing one feature length ski film per year for the next 54 years.

If you don’t do it this year, you’ll be one year older when you do.

Nobody has a favorite Warren Miller film.  They are all pretty much the same, featuring exotic locations, back country skiing and a montage of wipeouts.  Employing a homespun humor and heartfelt passion narrative, Miller is skiing’s greatest storyteller.  He showed girls in bikinis and tight pants, and the camera had a tendency to linger on snow bunnies and voice-overs marveling at “Austria’s top bottoms.”  A noted promoter of skiing, Miller famously made a career out of what the rest of us do on vacation.

Never eat in a restaurant that has a bowling trophy on the cash register.

Born in Hollywood, California, October 15, 1924, Miller is the youngest of three children in dysfunctional family.  He embraced the great outdoors as a refuge from an alcoholic father and a mother who served jail time for fraud.  As a young man, Miller’s hobbies included skiing, surfing – he built a surfboard in a junior high wood shop class – and photography.  He enlisted in the Navy at 18 and served in the South Pacific.  Miller first filmed skiing using a borrowed camera while on leave for a Christmas vacation to Yosemite in 1944.  He bought his first 8mm movie camera upon discharge from the Navy in 1946.  The following year, he moved to Idaho with a friend where they camped in the parking lot of Sun Valley Ski Resort and lived in a teardrop trailer.  They earned money as ski instructors and filmed each other to critique their skills.  In summers, they shifted to the California coast, where they filmed each other surfing.

If at first you don’t succeed, failure may be your thing.

Miller often showed his films to friends while making jokes about their exploits.  He began receiving invitations to show and narrate his films at parties, and it occurred to him that he could turn his hobby into a business.  In 1949, Miller borrowed money, bought a Bell and Howell 70 DA, and founded Warren Miller Entertainment.  At a time when there were fewer than 15 chair lifts in the U.S., he rented out halls and theaters and charged admission.  Miller showed his films at night at ski resorts so he could film next year’s movie during the day.  Soon he was showcasing his films in 130 cities a year.  The Warren Miller movie coming to town marked the unofficial start of ski season.

They say it’s always darkest before the dawn.  So if you’re going to steal your neighbor’s newspaper, that’s the time to do it.

Filmed at locations around the world, Miller captured footage from off-piste terrain that became the world’s first extreme sports documentaries.  A man of quick and witty humor, he narrated each show live until 1959.  His action films became legendary, capturing the essence of the pure freedom that is skiing.  “At the bottom of every ski run you ever make,” said Miller, “you are a different person than when you got off at the top.”  Mr. Miller has done more for the sport of snow skiing than perhaps any man in history.  “If I ask anybody who learned to ski after the age of five,” observed Miller, “they can remember their first day of skiing – what the weather was like, who they went with, what they had for lunch.  I believe that’s because that first day on skis was the first day of total freedom in their life.”

In 1988, Warren Miller sold his company to his son Kurt, who later sold WME to Time, Inc.  Warren Miller Entertainment has been owned by Active Interest Media since 2013.  Mr. Miller continued to narrate WME ski films until 2004, when he directed and narrated his 55th and final film, Impact.  He has retired completely from any involvement in films, but remains an active writer.   The 1978 U.S. Ski Hall of Fame inductee currently divides his time between Big Sky, Montana, and the San Juan Islands, near Seattle.

You know when you went skiing it changed your life forever.  Did it change you for the worse?  No.