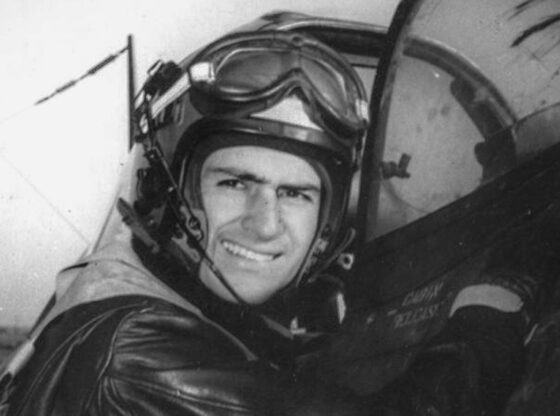 A major league Rookie-of-the-Year, All-Star and 1950 World Series MVP, Jerry Coleman appeared in six World Series as a superb second baseman for the New York Yankees.  He later managed the San Diego Padres and became a broadcaster, earning the 2005 Ford C. Frick Award by the National Baseball Hall of Fame for his broadcasting contributions.  The only player to fly combat missions in both World War II and Korea, Lt. Col. Coleman was a Marine aviator who flew 120 combat missions.  He received numerous honors and medals for his service, including two Distinguished Flying Crosses.

At Georgetown University, Al Blozis won AAU and NCAA indoor and outdoor shot put titles three years in a row from 1940 to 1942.  He went on to play offensive tackle for the New York Giants in 1942 and 1943, where he was named All-Pro.  In late 1943, the 6’6”, 250-pound Blozis finally persuaded the Army to waive its size limitations and accept him.  On this date in 1945, 2nd Lt. Blozis went in search of two of his men who failed to return from patrol in the Vosges Mountains in France during World War II and never returned.

In 1942, 20-year-old Warren Spahn enlisted in the Army.  He served with distinction and was awarded a Purple Heart.  Spahn saw action in the Battle of the Bulge and at the Ludendorff Bridge and was awarded a battlefield commission.  A 17-time All-Star and 1957 Cy Young Award, Spahn won 363 games – more than any left-hander in history.

One of the best athletes of his time, Hobey Baker was a two-sport star at Princeton, winning the 1911 national football championship and collegiate hockey titles in 1912 and 1914.  A captain in the U.S. Army Air Service, Baker died in December 1918 in a plane crash in France during World War I, hours before he was due to return to America.  Considered America’s first hockey star, Baker is the only person ever inducted into both the hockey and college football halls of fame.  The Hobey Baker Award is the highest honor in college hockey, given annually to the top men’s NCAA player.

One month after the attack on Pearl Harbor, Hank Bauer enlisted in the Marines.  He was deployed to the Pacific Theater, where he won 11 campaign ribbons, two Bronze Stars and two Purple Hearts.  As a lieutenant during the Battle of Okinawa, Bauer is one of six [of 64] Marines who survived.  The slugging outfielder returned to play in three All-Star Games and win eight World Series titles with the New York Yankees.  Mr. Bauer managed three big league teams and is a member of the Baltimore Orioles Hall of Fame.

After four solid NFL seasons, Pat Tillman turned down a three year, $ 3.6 million contract offer from the Arizona Cardinals in order to enlist in the Army, where he became a Ranger.  Corporal Tillman served several tours in Iraq and Afghanistan before he was killed by friendly fire in April 2004.  The 1997 Pac-10 Defensive Player of the Year is a member of the College Football Hall of Fame and has had his number retired by both Arizona State and the Cardinals.

After leading the majors in wins, strikeouts and innings pitched in 1941, 23-year-old Bob Feller became the first American professional athlete to enlist in the military, volunteering for the Navy.  Chief Petty Officer Feller served on missions in both the Pacific and North Atlantic, and was decorated with six campaign ribbons and eight battle stars for his service.  “Rapid Robert” was one of the greatest pitchers of his time, tossing three career no-hitters and leading the majors in strikeouts seven times.

An All-American tackle at Oklahoma, Bob Kalsu was the Buffalo Bills team rookie-of-the-year in 1968.  Following the season, he entered the Army to satisfy his ROTC obligation, and was shipped to Vietnam in November 1969.  Second lieutenant Kalsu was killed in action on July 21, 1970, when his unit came under fire near the A Shau Valley.  Two days after his death, Kalsu’s wife, Jan, gave birth to his son in Oklahoma City.  Bob Kalsu is the first of two pro football players [Don Steinbrunner] to be killed in action in Vietnam.  Posthumously awarded a Bronze Star and Purple Heart, Mr. Kalsu is memorialized on the Buffalo Bills Wall of Fame.

Larger than life in everything he did, Ted Williams was perhaps the greatest hitter who ever lived.  A 19-time All-Star, two-time MVP and six-time batting champion, the “Splendid Splinter” is a member of the Major League Baseball All-Century Team.  He also served as a Navy fighter pilot during World War II, then served as a Marine in Korea.  Before he became the first American to orbit the Earth, John Glenn flew combat missions with Ted Williams, describing the future Red Sox hall of famer as one of the best pilots he knew.

At USC, Louis Zamperini ran 4:08 to set a national collegiate record in the one mile run.  At 19, he became – and remains — the youngest American to qualify for the Olympics at 5,000 meters, and finished eighth in the 1936 Berlin Games.  In 1941, Zamperini enlisted in the Army Air Corps.  While conducting a search and rescue mission over the Pacific, second lieutenant Zamperini’s bomber crashed 850 miles south of Oahu, killing eight of the 11 men aboard.  He was captured by the Japanese and placed in several concentration camps, where he was beaten and tortured until World War II ended a year later.  Mr. Zamperini, who died in 2014, was the subject of Unbroken, a book [and later a film] that chronicled his life and war experience.