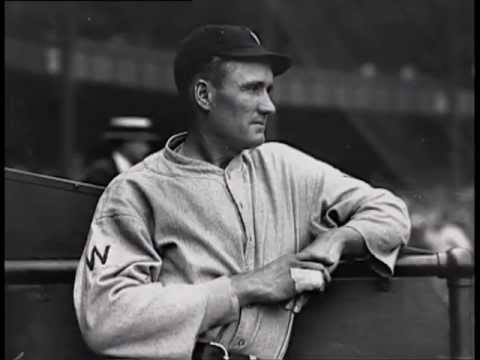 Walter Perry Johnson may be the greatest right handed pitcher ever to play major league baseball.

Born in Humboldt, Kansas on November 6, 1887, he lived on a farm until moving to Olinda, California, a small oil boomtown in Orange County.  He played baseball at Fullerton Union High School and later moved to Idaho, where he worked for a telephone company while pitching in the Idaho State League.  There he was spotted by a scout from the Washington Senators and signed to play in the big leagues at the age of 19.  He made his debut in 1907 and pitched for the Senators, the only team he would ever play for, for the next two decades.  He was 5-9 with an ERA of 1.88 in his first year and won 25 games in his fourth season in the league, at age 22.  He won at least 20 games in each of the next ten seasons and averaged 26 wins a year.  He twice won over 30 games and in 1913 fashioned an incredible record of 36-7 with an ERA of 1.14 and a winning percentage of .837.  He threw 346 innings and had 29 complete games for a team that spent only seven days in first place all season.

“The Big Train” threw harder than pitcher who had ever played in the major leagues and his sidearm motion was especially difficult for right-handed batters.  He added a curveball to his repertoire in his 7th year in the league and became even more unhittable.  He struck out 3,508 batters in his career, a record that lasted for 55 years.  Only two of his pre-World War II contemporaries finished within 1,000 strikeouts of that total, including Cy Young, who finished 705 strikeouts behind.  He won 417 games during his career, second only to Cy Young on the all-time list and he and Young are the only pitchers in baseball history to win 400 games.  He had twelve 20-win seasons in his 21 year career and threw 110 shutouts, which is still the major league record.  He led the AL in wins six times, had the lowest ERA five times and led the league in strikeouts a dozen times.  Johnson won pitching’s Triple Crown [wins, strikeouts, ERA] and threw a no hitter on July 1, 1920.  He threw 531 complete games, fourth on the all-time list.  He pitched 55.2 consecutive scoreless innings in his amazing 1913 season, still the AL record and threw 40 consecutive scoreless innings in May of 1918, making him the only pitcher in MLB history with two such 40-plus innings streaks.

Mr. Johnson was voted AL MVP in 1913 and 1924.  The latter came in his 18th year in the league, a season in which he won his only World Series championship. Fittingly, “Barney” was the hero as he pitched the final four innings in scoreless relief to allow the Senators to win in the 12th inning of Game 7.  He pitched three games in four days against the New York Highlanders in September of 2008 and shut them out each time and had four three-pitch innings in his career, an MLB record and was the first AL pitcher to strike out four batters in one inning.

Walter Johnson was elected to Major League Baseball’s All-Century Team in 1999.  That same year, The Sporting News ranked him number 4 on its list of Baseball’s 100 Greatest Players and the highest-ranked pitcher.  He was elected into the Baseball Hall of Fame’s inaugural class in 1936 on the first ballot, one of the “Immortal Five” with Babe Ruth, Ty Cobb, Honus Wagner and Christy Mathewson.

On this date in 1907, Walter Johnson earned his first major league win, a 7-2 victory over the Cleveland Indians.