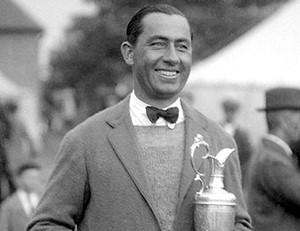 Walter Hagen was the first superstar of American golf.

In the first quarter of the 20th century, professionals were considered beneath wealthy amateurs in the socially exclusive world of golf.  Not allowed to use the front door of most clubhouses, pros were treated more like servants of the club than masters of the game.  “The Haig” was the world’s first full-time professional and was one of the most colorful characters the game has ever seen.  He ushered in the era of the playing pro.  “All the professionals should say a silent thanks to Walter each time they stretch a check between their fingers,” said Gene Sarazen, seven-time major champion and one of the greatest players of his day.  “It was Walter who made professional golf what it is.”  Golf’s greatest showman, the flamboyant Hagen captivated spectators, drew enormous crowds and almost single-handedly legitimized the PGA Tour.  Impeccably dressed in two-toned shoes, plus-fours and wearing slicked-back hair, Hagen was the first athlete to be named to the list of Best Dressed Americans.  He commanded huge appearance fees and was the first athlete to make a million dollars in his sport. “Sir Walter” made pots of money and spent it with legendary abandon.  The consummate showman, he once showed up to the first tee of an exhibition in top hat and tails.  Hagen raised the status of professional golf.  At a dinner honoring Hagen, the great Arnold Palmer [Daily Dose, 7/1/16] said, “If not for you, Walter, this dinner tonight would be downstairs in the pro shop, not in the ballroom.”

The second of William and Louisa’s five children—and only son—was born in Rochester, New York, on this date in 1892.  A working-class family, William was a blacksmith for the railroad and young Walter began caddying at the Country Club of Rochester as a boy to help support them.  He played golf every chance he got, and made his debut at 19 at the 1912 Canadian Open, finishing 11th.  Hagen finished fourth at the 1913 U.S. Open at Brookline Country Club—a match depicted in the 2005 film The Greatest Game Ever Played–where former caddy Francis Ouimet beat British legends Harry Vardon and Ted Ray to became the first American to win the U.S. Open.  A promising pitcher and shortstop, he canceled a tryout with the Philadelphia Phillies in August 1914 to play in the U.S. Open at Midlothian Country Club outside Chicago.  Hagen won, holding off Chick Evans by a single stroke to win his first tournament and the first of his 11 major championships.

Sir Walter is considered the greatest match player of all time.  He never let a bad shot ruffle him and his steady, unflappable demeanor was ideally suited for the match-play format.  An errant driver—Hagen had a pronounced sway in his swing—but he was a superb putter.  “I expect to make at least seven mistakes in a round,” Hagen reasoned.  “Therefore, when I make a bad shot, it’s just one of the seven.”  Match play [scoring by number of holes won, not total number of strokes taken] was more prevalent in The Haig’s day than now.  The PGA and U.S. Open Championships both required 36 holes of match play in the final round to determine the winner.  Hagen once won 22 straight 36-hole matches in PGA Championship competition and 32 out of 33 between the first round of the 1921 event and fourth round of the 1928 Championship.  In 1926, Hagen defeated the legendary Bobby Jones, 12 and 11, in a 72-hole challenge match which temporarily decided which of them was the greatest golfer of the day.  The famously genteel Jones could not contain his frustration afterward.  “When a man misses his drive, and then misses his second shot, and wins the hole with a birdie, it gets my goat,” said Jones.

Hagen won 11 majors, including the 1922 Open Championship, where he became the first native-born American to win golf’s oldest major.  He won the PGA five times between 1914 and 1929, including four in a row, and twice captured the U.S. Open.  The Masters was not yet in existence when Hagen was in his prime, and the Western Open was widely considered a major championship.  Sir Walter won it five times.  He claimed 45 Tour wins and 75 worldwide victories in a career that spanned over four decades.  Mr. Hagen played in a major for the final time in 1942.  The dapper, six-foot Haig played in the first five Ryder Cup [Daily Dose, 9/26/16] matches and captained the U.S. team in the first six.

A man of modest beginnings became a dashing and gracious champion.  “I never wanted to be a millionaire,” Hagen said.  “I just wanted to live like one.”  Hagen sometimes arrived at the first tee wearing clothing from the night before, a wee bit tipsy.  He gave his entire winner’s check from the 1929 Open Championship to his 16-year-old caddy.  In Britain, clubhouses were off-limits to pros.  After winning the 1922 Open at Royal St. George’s, Hagen hired an Austro-Daimler limousine which he parked in front of the clubhouse in which he changed clothes and took his meals. The esteemed golf writer Herbert Warren Wind said of Hagen, “Great as he was as a golfer, he was even greater as a personality—an artist with a sense of timing so infallible that he could make tying his shoelaces seem more dramatic than the other guy’s hole-in-one.”  His main rival was Bobby Jones [Daily Dose, 3/17/16].  In 1950, when Jones won more votes than Hagen to be named the greatest golfer of the first half-century, The Haig observed, “I would have voted for Jones myself.  He was marvelous.”

Walter Charles Hagen grew up only a few miles from Oak Hill Country Club, site of six men’s major golf championships.  He caddied at the Country Club of Rochester, where he would later serve as head pro.  In 1974, Hagen was inducted into the World Golf Hall of Fame.  Mr. Hagen died in Traverse City, Michigan, October 5, 1969 at 76.

“You’re only here for a short visit. Don’t hurry.  Don’t worry.  And be sure to smell the flowers along the way.” 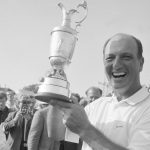 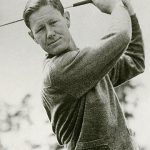