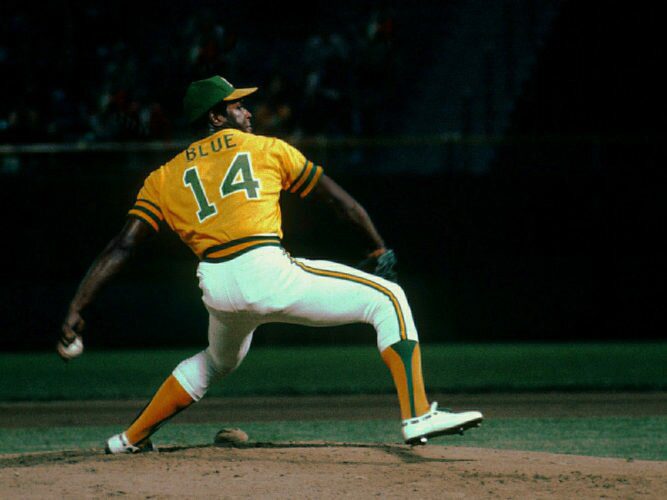 Vida Blue was the first player in American League history to be named Most Valuable Player and Cy Young Award winner in the same season. Vida Rochelle Blue, Jr., was born in Mansfield, Louisiana, on this date in 1949.  The oldest of Vida, Sr. and Sallie’s six children, Blue played football and baseball at Mansfield’s DeSoto High School.  He quarterbacked the football team, throwing for over 3,400 yards and 35 touchdowns while rushing for 1,600 more as a senior.  DeSoto went 10-2, outscoring opponents 314-76, and Blue accounted for an average of 425 yards in total offense per game.  In baseball, he was the ace of the pitching staff, hurling four no-hitters during his junior season.  As a senior, he tossed three more no-hitters .  Blue struck out 21 batters in one seven inning [high school regulation-length] game and 19 in another.  In spring 1967,  Vida Blue had a decision to make.   Alcorn State and the University of Houston recruited him to play quarterback, while Southern University [Daily Dose, December 24] wanted him to come to Baton Rouge to play baseball.  In addition, the Kansas City Athletics drafted him 27th overall—two spots ahead of future MLB slugger Dave Kingman–in baseball’s 1967 Amateur Draft.  The lefthander had to choose between college football and pro baseball.  Vida Blue, Sr., who worked as a laborer at an iron foundry, died suddenly during his oldest child’s senior year.  Left as man of the house, young Vida accepted a $ 25,000 signing bonus—spread over two seasons—and was assigned to the Athletics’ Winter League in Arizona.  He was 17, and his Rookie League teammates included Reggie Jackson, Burt Campaneris and Gene Tenace.  Blue began the 1968 season in the Single-A Midwest League.  The following summer, he made his major league debut, giving up six hits to the California Angels in a little over five innings of work on July 20, 1969. Blue began the 1970 season with the Iowa Oaks in the AAA American Association, going 12-3 and compiling a 2.17 ERA in 133 innings of work.  In September, the A’s [who had moved from Kansas City to Oakland prior to the 1968 season] called him up for the final month of the season, and Vida Blue gave the baseball world a peek into the future.  In his first start on September 11, Blue no-hit the Kansas City Royals until Pat Kelly [Daily Dose, July 11] singled with two outs in the eighth inning for the Royals’ only hit of the game.  Ten days later, he dominated the AL West Champion Minnesota Twins with a no-hit, one-walk complete game performance.  The following year was historical. After losing to the Washington Senators on Opening Day 1971, Blue won 17 of his next 19 decisions.  He started and won the All-Star Game and went on to win 24 games against 8 losses for the season.  Blue completed 24 games in 39 starts.  In 312 innings pitched, he struck out 301 batters and walked only 88.  After compiling a Bob Gibson-esque ERA of 1.82, Mr. Blue won the Cy Young Award [Daily Dose, July 6].  He was also named American League MVP, becoming the youngest AL winner of the 20th century and the first player in league history to win the Cy Young and MVP prizes in the same season.  The A’s won the franchises’ first-ever AL West title in 1971, and Vida Blue started the playoff opener, becoming the only player in MLB history to start a season opener, All-Star Game and first game of the postseason in the same year.  The 21-year-old fireballer appeared on the cover of Time, Sports Illustrated, and had the best name—how cool is Vida Blue?–in baseball.  In 1971, Mr. Blue was responsible for one-twelfth of the attendance of the entire American League—and he was paid $16,000 for the season making him, arguably, the most underpaid player in baseball history. Following his breakthrough season, Blue and notoriously thrifty A’s owner Charlie Finley got into a contract dispute, and Blue sat out most of the 1972 season.  He finished the year 6-10 and was not named to the A’s rotation for the postseason, a run that saw Oakland win the first of three consecutive World Series titles.  Blue won 20 games in 1973 and 1975 before being to the San Francisco Giants prior to the 1978 season.  In his first season across the Bay, Blue won 18 games, was the starting pitcher for the National League in the All-Star Game and was named National League Pitcher of the Year by the Sporting News.  After four seasons in San Francisco, Mr. Blue was dealt to the Kansas City Royals, where he played for two years.  He was arrested for cocaine possession in 1983, spent 90 days in a correctional facility in Fort Worth, Texas, and returned to win 18 more games for the Giants before calling it quits at 36. Vida Blue was the first pitcher to start in an All-Star Game for both the American [1971] and National [1978] League.  He played in six Mid-Summer Classics, won 20 games in three different seasons and won a Cy Young Award and MVP in the same year.  Blue was an integral member of a pitching staff that lead Oakland to five straight AL West pennants and three consecutive world championships.  His fastball often reached 100 miles per hour.  Pete Rose, MLB’s all-time hits leader, claimed that Blue threw as hard as anyone he ever faced.  Bill James, a noted baseball historian and statistician, cited Blue as the hardest throwing lefty–and second hardest thrower [behind Nolan Ryan]–of his era.  In the early and middle 1970s, Vida Blue was dominant.  He was also stylish, wearing his first name—which means “life” in Spanish—across the back of his uniform rather than his last.  Mr. Blue won 209 games in 17 big league seasons.  He is a member of the Louisiana Sports and Bay Area Sports Halls of Fame and currently works as a baseball analyst for the San Francisco Giants.