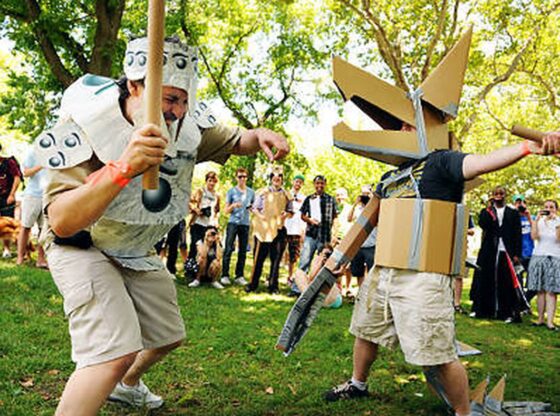 In February 2018, we brought you our first feature on Unusual Sports.  Readers were introduced to Extreme Ironing, Dog Surfing and Underwater Hockey.

It was so well received that we had no choice but to publish a sequel.  Here are ten more activities that are anything but mainstream.

The Cooper’s Hill Cheese-Rolling and Wake is an annual event held near Gloucester, England, each spring.  Contestants race down Cooper’s Hill trying to catch a nine-pound round of Double Gloucester cheese, which can reach speeds of 70 miles per hour.  The first person over the finish line is the winner – and gets to keep the cheese!

Originally established in New Zealand, Zorbing involves rolling along land or water inside an orb, usually made of transparent plastic.  In November 2006, South Africa’s Steve Camp traveled 570 meters [1,870 feet] in a single roll, setting a world record for the longest zorb.

The brainchild of Danny Dill, whose father was a pumpkin grower, the Windsor Giant Pumpkin Regatta has been held on Lake Pesaquid in Windsor, Nova Scotia, since 1999.  Racers compete in the hollowed-out gourds, which can weigh up to 1,800 pounds and occasionally sink.  The Windsor race has inspired other giant pumpkin regattas, including events in Vermont, Oregon, and at the University of Wisconsin-Madison.

Since 2000, the World Cup of Swamp Soccer has taken place in Vuorisuo, Finland.  Played in swamps that are 30 x 60 meters, the game includes five players, plus a goalie, for each team.  Originally intended as a way for skiers to stay in shape during summer, Swamp Football has grown in popularity worldwide.

On the last Sunday of each June – Vintage Day — tossers from all over the world gather in Swaton, England to compete in the World Egg Throwing Federation championship.  The aim is for a team of two to throw and catch a chicken egg the longest distance without breaking it.  The world record was established in 1978, when Johnny Dell Foley of Texas threw one 323 feet, two inches to his cousin, Keith Thomas.

A beer mile is a one-mile drinking race combining running and chugging.  Run on a quarter-mile oval, contestants down a 12-ounce beer at the starting gun, followed by a lap around the track.  The process continues for four full laps: chug a can of beer, then run a lap.  James Nielson became a legend after becoming the first to break the five-minute barrier in 2014.  The current world record is held by Canada’s Corey Bellemore, who quaffed four Flying Monkeys while covering the mile run in 4:33.6 in 2017.  American Erin O’Mara set the women’s mark in 2015, when she ran 6:08 in Austin, Texas.

Sporthocking is a cross between skateboarding and sitting down.  Invented in Germany, this “extreme sitting” sports involves a participant – the hockerer – performing a wide range of tricks using a lightweight stool before sitting on it to show their performance is complete.  What do you get when you combine juggling, breakdancing, boarding, acrobatics and sitting?  Sporthocking, of course!

Once a Winter X Games event until it was removed over safety concerns, Shovel Racing involves riders racing down a snowy hill riding on a shovel.  Top speeds exceed 60 miles per hour.  The sport originated in the ski resorts of New Mexico, when workers used shovels as sleds to move from one location to another.  This past February, Angel Fire Resort in Taos, New Mexico hosted the 39th Annual World Championships of snow shovel racing.

Originated in 2007, Cardboard Tube Fighting involves battles where fighters duel with cardboard tubes.  The object is for a competitor to break his opponent’s tube without breaking his own.  There are Cardboard Tube Fighting Leagues around the world, including locations in Seattle, San Francisco, Australia, Belgium and the U.K.

A unique blend of soccer and cycling, Cycleball is the weirdest sport you have never heard of.  Invented in Germany in 1893, the game involves two teams of two players each who ride a fixed gear bicycle with no brakes.  Played on a basketball court, either player shoots a ball through the opponent’s goal using his head or the front wheel of his bike.