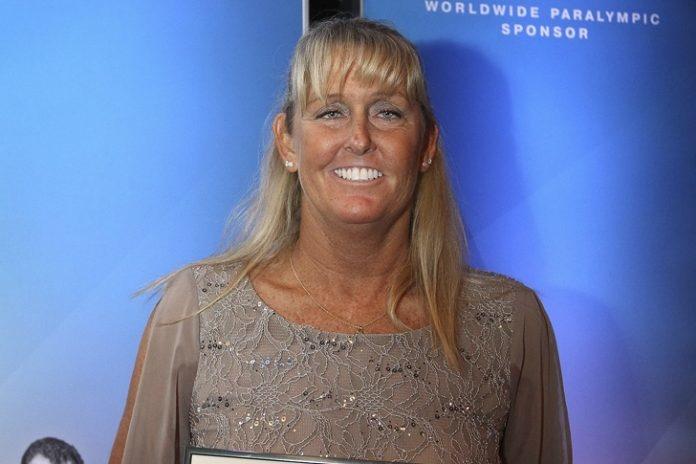 With an astounding 55 medals, Trischa Zorn is the most decorated Paralympian ever.

Blind since birth, Zorn has amassed more gold medals – 41 — than Michael Phelps, Mark Spitz and Matt Biondi combined.  For three Paralympic Games and part of a fourth, spread over a dozen years, Zorn had never won a silver medal.  She had only earned gold – 25 times.

Unbeaten in every Paralympic race she entered from 1980 to 1992, Zorn lost for the first time when teammate Elizabeth Scott edged her with a world record performance in Barcelona, forcing Zorn to settle for silver.

Zorn competed in seven Paralympics between 1980 and 2004.  At one point she held eight world records.  In 1993, Zorn was named Female Athlete of the Year by the U.S. Association of Blind Athletes and, in 1994, was named one of the nation’s top 10 female athletes of the year by the United States Olympic Committee.

In 2012, Zorn was inducted as the first American woman into the Paralympics Hall of Fame.

Born in Orange, California, June 1, 1964, Zorn began swimming alongside sighted swimmers at ten with the Mission Viejo Nadadores.  One of the most successful swim clubs in the country, the Nadadores have sent an athlete to every Olympics since 1976, including Shirley Babashoff, Greg Louganis, and Mary T. Meagher.

It took her just six years to make her Paralympic debut, winning seven gold medals and setting three world records in the 1980 Arnhem Games in the Netherlands.  After graduating from Mission Viejo High School – alma mater of 1998 Masters champion Mark O’Meara and two-time women’s soccer gold medalist Julie Foudy – Zorn accepted a scholarship to the University of Nebraska, where she was a four-time All-American backstroker.

Swimming is one of nine sports for visually impaired athletes in the Summer Paralympic Games.  Every Paralympic athlete undergoes a process to verify his or her eligibility to compete in a sport.  The evaluation process is conducted by a panel of individuals authorized and certified by a sport federation to determine an athlete’s sport class.  In the U.S., the classification has three components: a bench test, a water test, and observation during competition.

Paralympic swimming competitions are divided into three classifications: S11, S12 and S13.  S11 swimmers are unable to see at all and are considered totally blind, while S13 athletes are considered the most sighted swimmers but are considered legally blind.  Trisha Zone was classified S12, swimmers who can recognize the shape of a hand and have some ability to see.  There is a wide range of vision ability within S12.

Born with aniridia – a congenital disorder that results in the absence of the iris in both eyes – Zorn’s vision was 20/1100, allowing her to vaguely make out images only when directly in front of her face.  In 2003, she underwent artificial iris and lens implant surgery, which improved her vision to 20/850.

An amazing talent, Zorn competed in every stroke – freestyle, backstroke, butterfly and breast – as well as individual medley and relay events.  In addition to her record 41 gold medals, the humble Californian collected nine silver and five bronze.  “I never thought I could not be beat,” said Zorn.  “Once you are at the top of the mountain, it is awesome.  But staying on top of that mountain is harder than the original climb up.”

Her most memorable medal was a bronze she won in the 100M backstroke at Athens in September 2004.  “During my preparation for the Games, my mom passed away from cancer in June.  She had always attended all my competitions and it was hard to know she was not going to be there.  With the interruption from training and the emotional stress, I still managed to medal at my last games.  It was a tribute to my mom.”

After serving as flag-bearer for Closing Ceremonies at the 2004 Paralympics Games in Athens, Zorn ended her spectacular career at 40.  She served as a representative on the USOC’s Athletes Advisory Council, working with the Department of Veteran’s Affairs to help get American military members involved in Paralympic sports.

Zorn, now married to Bryan Hudson and stepmother to two daughters, served as a teacher in inner-city schools in Indianapolis.  “I thought with what I have overcome with my disability that if I could just reach these children…that I could be a good role model for them.”

She left teaching to earn a law degree from Indiana University and currently works for the Department of Veteran’s Affairs, doing overseas legal work for veterans or beneficiaries who are unable to handle their own finances.

In 2000, USA Swimming established the Trischa L. Zorn Award, presented annually to a swimmer with a disability who has achieved excellence.