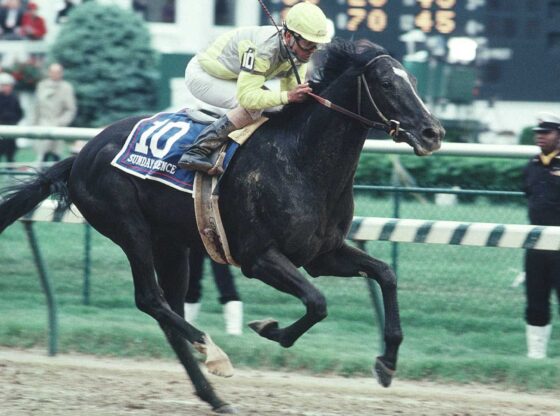 The Triple Crown of Thoroughbred Racing consists of three races: the Kentucky Derby, the Preakness Stakes and the Belmont Stakes.

Only 12 horses have won the elusive Triple Crown, the greatest accomplishment in thoroughbred racing.  The grueling schedule of three races in five weeks over longer distances than most horses have previously run is probably the most difficult task a thoroughbred will ever face.  Forty-seven horses have won two of three Triple Crown races but only 23 won both the Kentucky Derby and Preakness — putting themselves in position to capture the Crown — only to fail in the Belmont Stakes.

Winning the Belmont Stakes and completing the Triple Crown is the difference between becoming a legend and just another horse that fell short of history.  First accomplished by Sir Barton in 1919, three horses captured the Crown in the 1930s, and four completed the feat in the 1940s.  Since 1948, only four horses have won the Triple Crown.  Secretariat, arguably the greatest horse of all time, did it in 1973, setting track records in each event that still stand today.  The only back-to-back winners were Seattle Slew and Affirmed in 1977 and 1978, respectively.  Following Affirmed’s win in ’78, the Sport of Kings endured its longest Triple Crown drought — 37 years — until American Pharoah ended it with his historic performance in 2015.

The Belmont Stakes is held five weeks after the Kentucky Derby and three weeks after the Preakness Stakes.  Nicknamed The Test of Champions, it is, at one-and-a-half miles, the longest and most grueling of the Triple Crown races.  Eight times Triple Crown hopefuls have entered the Belmont and finished second.  Perhaps the most heartbreaking came in 1998, when Real Quiet lost to Victory Gallop by a nose in the final stride of the race.  It remains the closest finish [four inches] in Belmont history.

Pensive was the first horse to win the first two legs of the Triple Crown and lose the third.  In 1944, the bright chestnut stallion blazed to easy victories at Churchill Downs and Pimlico.  At the Belmont — which had just upped its purse to $ 50,000 – Pensive was in the lead when Bounding Home took the race by less than half a length.  Following his loss at Belmont, Pensive – whose son and grandson later won the Kentucky Derby — lost all eight of his final starts.

After breezing to victory in the 1958 Derby and Preakness, Tim Tam was the odds-on favorite to win the Triple Crown.  Racing for Calumet Farm, the dark bay stallion had a commanding lead before fracturing a sesamoid bone and hobbling the last yards across the finish line in second place.

Three horses that won the first two legs of the Crown never made it to the starting gate for the third.  Burgoo King [1932], Bold Venture [1936] and I’ll Have Another [2012] all failed to run in the Belmont due to injuries.  In 2008, Big Brown entered the Belmont as a prohibitive favorite, having won the first two legs of the Triple Crown impressively.  Sadly, he cracked a hoof and did not finish the race.

Two horses entered the Belmont Stakes undefeated.  Majestic Prince entered the 1969 Belmont having won nine in a row, but had strained a leg tendon while winning the Preakness.  The Prince needed rest, but the sport had not seen a Triple Crown winner in 21 years and pressure from the media to race him was intense.  The first horse in history to enter the Belmont undefeated finished second and never raced again.  With lineage that includes Secretariat, Man O’ War and War Admiral, Smarty Jones won the 100th running of the Kentucky Derby in 2004.  Two weeks later, he won the Preakness by a record 11 ½ lengths.  He entered the Belmont having won eight straight, and was the tenth horse since Affirmed in 1978 to have won the first two legs of the Triple Crown.  Before 120,139 – the largest crowd ever to see a sporting event in New York – the chestnut stallion set an early blistering pace, only to be overtaken by 36-1 longshot Birdstone to finish second.  It was the only time in his career that Smarty Jones was passed in a race.

In 1989, Sunday Silence won the Derby and Preakness over runner-up Easy Goer.  In the Belmont, Easy Goer roared past Sunday Silence on the turn for home and pulled away to win the second-fastest Belmont in history, behind Secretariat in 1973.

Forward Pass became the most controversial winner in Kentucky Derby history, after being declared the winner of the 1968 race as a result of the disqualification of Dancer’s Image for doping.  After winning the Preakness, Forward Pass had a chance to claim the Triple Crown.  As the Belmont approached, the Derby controversy raged on, and many fans and experts felt the bay stallion would be an illegitimate champion.  The debate ended when Stage Door Johnny, a distance horse who had sat out the Derby and Preakness, beat Forward Pass by a length-and-a-half.  Stage Door Johnny was later voted 1968 Horse of the Year.

In 1999, Charismatic was a 31-1 longshot in the 125th Kentucky Derby.  He held off a late charge by Menifee to win by a head, then beat Menifee again at the Preakness two weeks later.  At the Belmont, the chestnut colt looked like he was going to become the first Triple Crown winner in 21 years, taking the lead in the final furlong.  With an eighth of a mile to go, Charismatic fractured his foreleg in multiple places.  Jockey Chris Antley eased him up, dismounting right after the finish line and cradling the colt’s left front leg until help arrived.  Antley’s actions probably saved Charismatic’s life, and he underwent surgery the next day.  Charismatic finished third at the Belmont and never raced again.  The footage of a tearful Antley holding his horse was selected as the 1999 National Thoroughbred Racing Association Moment of the Year.