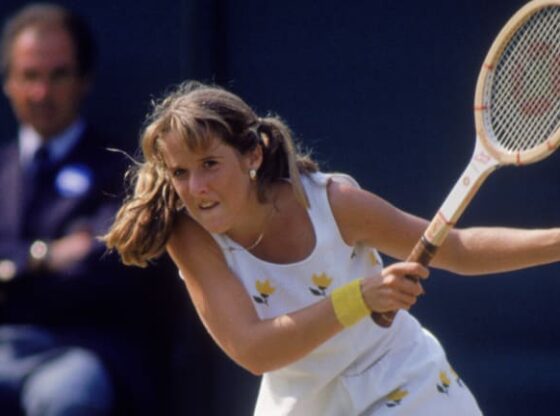 Tracy Austin is the youngest champion – male or female – in U.S. Open history.

Perhaps the greatest young female prodigy in tennis history, Austin appeared on the cover of World Tennis magazine at four.  At ten, she won the U.S. National 12s championship and had earned two dozen age-group titles.

In March 1976, Austin was featured on the cover of Sports Illustrated accompanied by a banner proclaiming, A Star Is Born.  The following year, she steamrolled into the U.S. Open quarterfinals with three straight-set victories to become the youngest Grand Slam quarterfinalist in history.

At 16 – and still wearing braces – the poised Californian defeated 35-year-old Billie Jean King in the quarterfinals of the 1979 Wimbledon Championships.  Two months later, she beat Chris Evert to become the youngest-ever U.S. Open champion, then celebrated with her mother by eating at McDonald’s.

By the time she was 21, Tracy Austin’s playing days were over.  Back pain and persistent sciatica shortened what had initially appeared to be an assault on the record books, but her 35 pro titles and World Number One ranking in 1980 paved the way to being inducted into the International Tennis Hall of Fame in 1992.  True to form, the 29-year-old Austin became the youngest hall of fame inductee in history.

Tracy Lee Austin was the fourth of five children raised in a tennis family.  All three of her older siblings played on the pro tour, and her younger brother earned a college tennis scholarship.

Her parents, George and Jeannie, met as undergrads at UCLA.  George became a nuclear physicist while Jeannie ran the pro shop at the Jack Kramer Club in Rolling Hills.

The night of December 11, 1962, Jeannie Austin hit balls to her three children.  At 6 the next morning, Jeannie gave birth to her daughter, Tracy.

At two, Tracy started in tennis at the Jack Kramer Club when her mother took the youngster to work with her.

Austin won her first professional event while still an amateur.  Just weeks past her 14th birthday, she became the youngest winner of a pro tournament at the Avon Futures of Portland.

The 15-year-old Austin turned pro in October 1978, the same month, she won her first singles title, in Stuttgart.  First prize was a Porsche, but young Tracy didn’t even have a driver license.  It was the first of four Porsches Austin would win by her 18th birthday.

Possessing a game exceedingly advanced for a player so young, Austin was relentless from the baseline.  With a strong forehand and reliable, two-fisted backhand, she struck the ball deep – and with power.

A good server who rarely double-faulted, Austin played with pinpoint accuracy and had an underrated net game.  She won singles titles on all surfaces, including red clay, green clay, grass, hardcourt and indoor carpet.

Austin won three majors: two U.S. Open singles titles and the 1980 Mixed Doubles championship at Wimbledon, where she teamed with her brother, John, to become the first brother-sister duo to achieve that feat.

Her Open titles came against two of the greatest female players in history.  In 1979, Austin beat Evert in a finals match that set attendance records, then downed Martina Navratilova in 1981 to reclaim the Open crown.

At the 1981 Toyota Championship, Austin became one of only three players to beat Chrissie and Martina back-to-back en route to a title.

A two-time Associated Press “Female Athlete of the Year,” Austin was ranked in the top ten in the world six times between 1978 and 1983.  She amassed a career singles record of 335-90, was 13-1 in Federation Cup play and won the 1980 WTA World Championships.

A mother of three sons, Tracy Austin currently lives in Rolling Hills, California, and is a tennis commentator for a variety of television networks.

This week marks the 41st anniversary of Tracy Austin’s first win at a pro event when she beat Stacy Margolin 6-7, 6-3, 4-1 at Avon Futures of Portland.