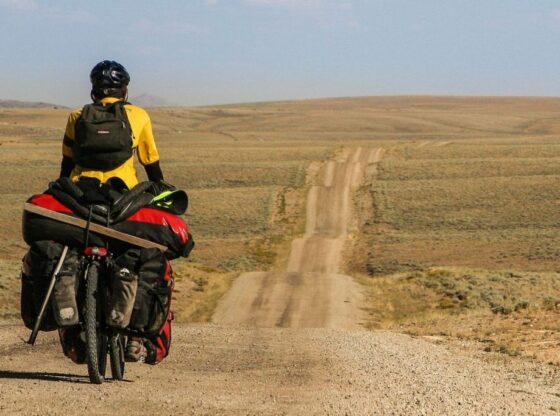 The Tour Divide is the most demanding ultra-distance trail bike race in the world.

Held each summer, the Tour Divide is an extreme test of endurance, self-reliance and mental toughness.  Decidedly not for sprinters, this battle royal braves mountain passes and windswept valleys as it traverses the United States, starting in the hinterlands of Canada and ending in the badlands of the Mexican Plateau.

Following the Great Divide Mountain Bike Route [GDMBR], a 2,745-mile trail that follows the Continental Divide from Canada to the Mexican border, the Tour Divide is the world’s longest off-pavement bicycle race.  Beginning in Banff, Alberta, and ending in Antelope Wells, New Mexico, the route is unmarked and circuitous, requiring navigational skills as it crisscrosses the Continental Divide 30 times from north to south.

Traveling through boundless remote mountain wilderness sprinkled with grizzly bears and mountain lions, the GDMBR meanders through the Canadian provinces of Alberta and British Columbia, then works its way south through Montana, Idaho, Wyoming, Colorado, and New Mexico.  Unlike the Trans Am Bike Race, which is contested on paved roads as it travels from Oregon to Virginia, the Tour Divide is raced off-road, with 90 percent of the course unpaved.

Tirelessly mapped over a four-year span and published in 1998 by the Adventure Cycling Association, North America’s premiere bicycle travel organization, the GDMBR hugs the spine of the Continental Divide.

Competitors race while bikepacking – backpacking by bike – over some of the country’s most rugged terrain.  During the race, a raindrop falling on a cyclist’s left check will find its way to the Atlantic Ocean or the Gulf of Mexico, while one landing on his right check will end up in the Pacific.

The race typically takes three weeks to complete on a course chock-full of spectacular scenery.  The highest point is Colorado’s Indiana Pass, which sits 11,190 feet above sea level, and riders pass through Alberta’s Flathead Valley, the Grand Tetons, Boreas Pass, and the Gila Wilderness along the way.

Although the Tour Divide has been completed on both single-speed and tandem bicycles, most competitors race the rooftop of North America by mountain bike.

The race is strictly self-supported – riders provide their own food, water, shelter, and medical treatment – and cannot rely on outside assistance with course navigation or bike maintenance.

While the route passes through Helena, Butte, Steamboat Springs, Breckenridge, and Silver City, most of the course runs through extremely small towns, where goods and services are limited.

The Tour Divide is not a stage race.  The clock runs continuously from the start until riders cross the finish line.  To be competitive for the overall title, riders must cover at least 150 miles per day while spending 16-plus hours in the saddle.

No entourages follow these athletes, and there are no rest days.  Receiving little coverage in mainstream media, the Tour Divide is a niche event, but it was the subject of Ride the Divide, an award-winning documentary that followed the inaugural race, in 2008.

The race usually starts the second weekend of June.  There is no entry fee or formal registration – any rider who shows up at the start can compete – and there are no prizes for finishing.  First contested in 2008, the Tour Divide recognizes the top male and female finishers.

Matthew Lee was the top male in the first three events, while the women’s side has had no repeat winner in the nine-year history of the competition.  British endurance racer Mike Hall is a two-time TD champion and course record holder.

In 2016, Hall finished in an unfathomable time of 13 days, 22 hours and 51 minutes, beating the course record Josh Kato set one year earlier by over 12 hours.

One year later, he recorded the fastest time in the history of the event while finishing first, but missed out on the official record because he had been forced to take an alternate route due to forest fires. “Experience counts for a lot on the Tour Divide.

You learn a lot the first time and it seems a waste not to go back and use that experience.  It’s the type of route that gets under your skin and into your blood.”

At one point, Mike Hall held the world record for fastest circumnavigation of the globe by bicycle.  In 2012, he took 91 days, 18 hours to circle the world from west to east, averaging nearly 200 miles per day.

The 2018 Tour Divide bike race is slated to begin Friday, June 8 at 8 a.m. MT.  The defending male champion is Brian Lucido, who won the 2017 event as a rookie.  Marketa Peggy Marvanova is the defending female winner after finishing last year’s Tour Divide in 22 days, 18 hours and four minutes.

“It is by riding a bicycle that you learn the contours of a country best, since you have to sweat up the hills and coast down them.”  — Ernest Hemingway