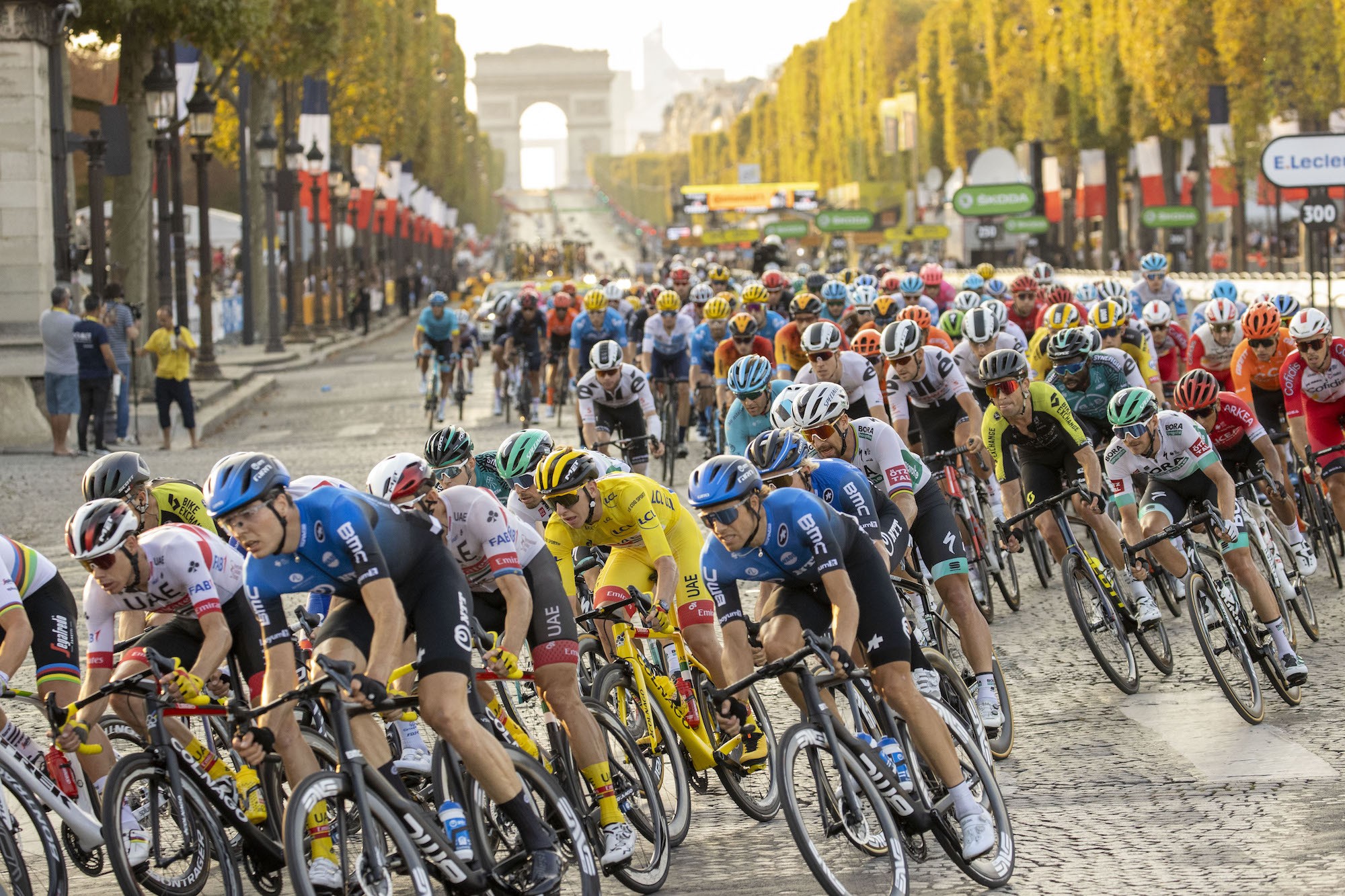 The Tour de France started as a publicity stunt to sell newspapers.  Today it is the most famous bicycle race in the world.

The Tour de France is an annual multiple-stage bicycle race held primarily in France.  First organized in 1903 to increase sales for L’Auto, a newly-formed sporting paper that was printed on yellow stock, a 26-year-old cycling journalist named Geo Lefevre suggested a six-day road race around France.  The inaugural field included five-dozen riders and began in Paris, with stops in Lyon, Marseille, Bordeaux and Nantes before returning to France’s capital city.  Frenchman Maurice Garin was the winner, collecting 12,000 francs—six times what most workers earned in a year—and circulation of L’Auto more than doubled during the race.  Held annually except for the eleven times it was canceled for two World Wars,  participation expanded from a primarily French field to international, as riders from all over the world began to participate each year.  The Tour de France is the premier event on the Union Cycliste Internationale tour, the top male elite road cycling tour in the world and is run by the Amuary Sport Organization.

The sport of cycling has three Grand Tour events each year.  Each is three weeks long and are the premiere events in road racing.  Giro d’Italia is held in Italy in late May and early June, the Tour de France takes place in July, and the Vuelta a Espana takes place in Spain during the month of September.  The Tour de France is the oldest and most prestigious of the three.  The event consists of 21 day-long segments, called stages, raced over a 23 day period that covers around 2,200 miles.  The route changes each year but the format does not, with the appearance of time trials, mountain stages in the Pyrenees and Alps and the finish on the Champs-Elysees in Paris.  The race alternates between clockwise and counterclockwise circuits of France, occasionally making passes through nearby countries.  La Grande Boucle—the Big Loop—involves 20-22 teams of nine riders each.  All of the stages are timed to the finish; the riders’ times are compounded with their previous stage times.  The rider with the lowest aggregate time is the leader of the race and gets to don the coveted maillot jaune—the yellow jersey—and the cyclist who completes the Tour de France in the lowest aggregate time is declared the winner.  The oldest and main competition in the Tour de France is called the ‘general classification’, for which the yellow jersey is awarded.  The winner of this is considered the winner of the race.  Other competitions within the race include the ‘mountains classification’—the second oldest classification– which awards the white jersey with the red dots to the rider [known as “King of the Mountains”] who posts the fastest times in the mountain stages.  Sprinters compete for the ‘points classification’ and are awarded the green jersey, while the winner of the young [under 26] rider classification dons the white jersey.  The leader in the inaugural Tour de France wore a yellow armband.  The maillot jaune—chosen to match the color of the pages of L’Auto—was first awarded in 1919.

Hosting a stage start or finish brings prestige and business to a town.  The prologue and first stage—Grand Depart—are particularly prestigious and one town will usually host both.  The yellow jersey is presented to the leader on a podium in the stage’s finishing town.  In the 1903 race, Maurice Garin—a chimney sweep—beat Lucien Pothier, an apprentice butcher, by nearly three hours, still the largest margin of victory in Tour de France history.  The closest race came in 1989, when American Greg LeMond overtook France’s Laurent Fignon during a time trial on the last stage to win by eight seconds.  The longest route in history occurred in 1926 and covered 3,570 miles.  The fastest Tour de France was in 2005, when the average speed was 25.7 mph.  The slowest took place in 1919, when only ten cyclists finished the race at an average speed of 14.9 mph.  The Tour de France is the largest multi-day sporting event in the world, as over 12 million spectators line the route each year.  The average cyclist will burn 4,500 calories per stage while making over 485,000 pedal strokes for the three week race.  Four men have won the Tour de France a record five times, including Eddy Merckx [Daily Dose, June 21], who has worn the yellow jersey for 96 stages, more than any cyclist in history.  France’s Richard Virenque won the King of the Mountains classification a record seven times between 1994 and 2004, while German cyclist Erik Zabel wore the green jersey a record six straight years in the late 1990s.