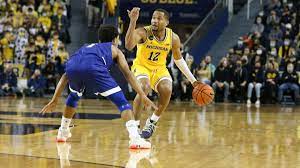 College basketball season is in full swing, and today we take a look at ten of the toughest places to play across the nation.

Opened in 1971, Indiana University’s Assembly Hall is bonkers-loud.  The 17,472-seat gym packs in 7,800 students per game, most in the country.  The state of Indiana is synonymous with basketball and Assembly Hall is loaded with tradition.  The floor is classic — just hardwood and lines with the outline of the state and an interlocking IU logo.  The five national championship banners hanging from the rafters adds a nice touch.

Situated at a mile high in elevation, the court at the University of New Mexico’s WisePies Arena – better known as The Pit – sits 37 feet below street level.  With over 18,018 fans making ear-popping noise, the New Mexico Lobos have a .8144 all-time winning percentage at home [through the 2016-17 season].

Located on the outskirts of Cincinnati, Cintas Center at Xavier University is one of the best-lit arenas in college hoops.  It is also one of the craziest, with fans throwing confetti after the Musketeers score their first basket of every game.

The Carrier Dome hosts both football and basketball games for Syracuse University.  With seating capacity of 35,000 for hoops, fans sit far from the court.  The expansiveness of the arena, coupled with a weird backdrop, make the dome the toughest place in the nation to shoot.

Affectionately known as the “Izzone,” the Breslin Student Events Center has been home to Michigan State since 1989.  Spartan coach Tom Izzo is 294-39 in the past 21 seasons at Breslin, where 15,138 Spartan fans – often decked in all-white – can make it difficult for opponents to hear.

The Pitt Panthers have won nearly 90 percent of their games at the Petersen Events Center.  Known as the “Oakland Zoo,” the student section is among the rowdiest in the nation, making any visit to the 12,500-seat building hard for Pitt opponents.