11 of the Top Duos in Sports History 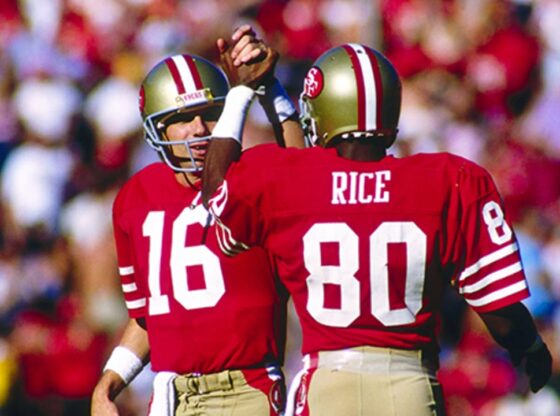 Last November, we brought you Dominant Duos, the two most magnificent number-one and number-two starting pitchers in MLB history.

Today we discuss terrific twosomes, the greatest pairings of all time.  How good are these duets?  Consider those that didn’t make the list.  Franco Harris and Rocky Bleier combined for 2,164 yards and 19 touchdowns for the 1976 Pittsburgh Steelers.  John Stockton and Karl Malone – the greatest pick-and-roll combination the NBA has ever seen, played a record 1,412 regular-season games together.  And the M&M Boys, Mickey Mantle, and Roger Maris belted a combined 115 home runs in 1961.

As good as they were, these combos don’t quite meet the standard of the Top Tandems – eleven of the most delightful dyads in sporting history.

Joe Montana & Jerry Rice. Arguably the greatest quarterback in history and undoubtedly football’s all-time best receiver, these two connected for 67 regular-season touchdown passes.  Montana and Rice won two Super Bowls together.  In 1989, the pair connected 11 times for 215 yards and a touchdown in the 49ers come-from-behind victory over Cincinnati.  The next year, Joe Cool and World hooked up seven times for 148 yards and three touchdowns in a 55-10 demolishing of the Denver Broncos.  In eight years together, they won five NFC West titles.  Rice also caught 92 touchdown passes from Steve Young, but Montana was the better quarterback, giving this duo the nod.

Alan Trammell & Lou Whitaker.  This pair played 1,918 games together with the Detroit Tigers, the most by a double-play duo in baseball history.   Their names are forever intertwined: Trammell and Whitaker came up through the minors together and made their MLB debuts in the same game.  Both won Gold Gloves in 1983 and 1984, and Trammell was voted into the Baseball Hall of Fame in 2018.  Isn’t it time for Sweet Lou to join him in Cooperstown?

Wayne Gretzky & Mark Messier.  The only player in NHL history to captain two franchises to a Stanley Cup title, Messier is second on the league’s all-time scoring list.  The first spot belongs to Gretzky, the game’s undeniable GOAT.  These legends won four Stanley Cups together with the Edmonton Oilers.  Following the departure of the Great One in 1988, Messier won two more, including leading the New York Rangers to their first title in 54 years, in 1994.

Ron Turcotte & Secretariat.  Turcotte rode Big Red to the 1973 Triple Crown in epic fashion, setting new track records in all three races.  Secretariat won the Kentucky Derby in 1:59, becoming the only horse in history to break the two-minute mark at Churchill Downs.  Two weeks later, the duo easily won the Preakness.  The greatest season in thoroughbred racing culminated at the Belmont, with Secretariat winning by 31 lengths.  Nearly half a century later, all three track records still stand.

Kerri Walsh Jennings & Misty May-Treanor.  The greatest beach volleyball team in the history of the sport won three Olympic gold medals and three world championships together between 2003 -12.  The duo shared Sportswoman of the Year awards in 2004 and 2006 and recorded win streaks of 112 matches and 19 tournaments from August 2007 and August 2008.

Larry Csonka & Mercury Morris.  In 1972, these backfield mates become the first 1,000-yard tandem in NFL history while leading the Miami Dolphins to an undefeated season.  A punishing fullback, Zonk rumbled for 1,117 yards and tallied six touchdowns while averaging a whopping 5.2 yards per tote.  The lightning-quick Morris led the league with a dozen touchdowns, averaged 5.3 yards per carry and rushed for 1,000 yards.  Both earned a trip to the Pro Bowl.

Lefty Grove & Mickey Cochrane. These battery mates played 224 games and nine years together with the Philadelphia A’s.  Grove is one of the five best pitchers in history and arguably the greatest southpaw ever.  Cochrane rates as one of the ten best catchers all time.  The pair led the A’s to three straight AL pennants between 1929 and 1931 and World Series titles in 1930 and ’31.  Each landed in Cooperstown.

Bob & Mike Bryan.  Identical twins, the Bryan Brothers are the most successful tennis doubles team of all time.  They spent more than 400 weeks, including 139 straight, as World No.1 in men’s doubles.  The twins have competed in a record seven consecutive men’s Grand Slam finals, captured Olympic gold in London in 2012 and have gone 24-5 as a team in Davis Cup play.

Babe Ruth & Lou Gehrig.  The heart of the Murderer’s Row batting lineup of the famed 1927 New York Yankees, the Bambino and Iron Horse are baseball royalty.  Hitting third and fourth in the order, they mashed more than 600 home runs while playing together, including homering in the same inning 19 times.  Ruth and Gehrig enjoyed unparalleled success, winning three World Series titles and earning a spot on the Yankees Mount Rushmore.

Michael Jordan & Scottie Pippen.  Members of the 1992 Olympic Dream Team that captured gold in Barcelona, this duo led the Chicago Bulls to six NBA titles in as many appearances.  In nine seasons together, Jordan was a five-time NBA MVP and Pippin a seven-time All-Star.  Both were elected to the NBAs 50th Anniversary All-Time Team and landed in the Naismith Basketball Hall of Fame.