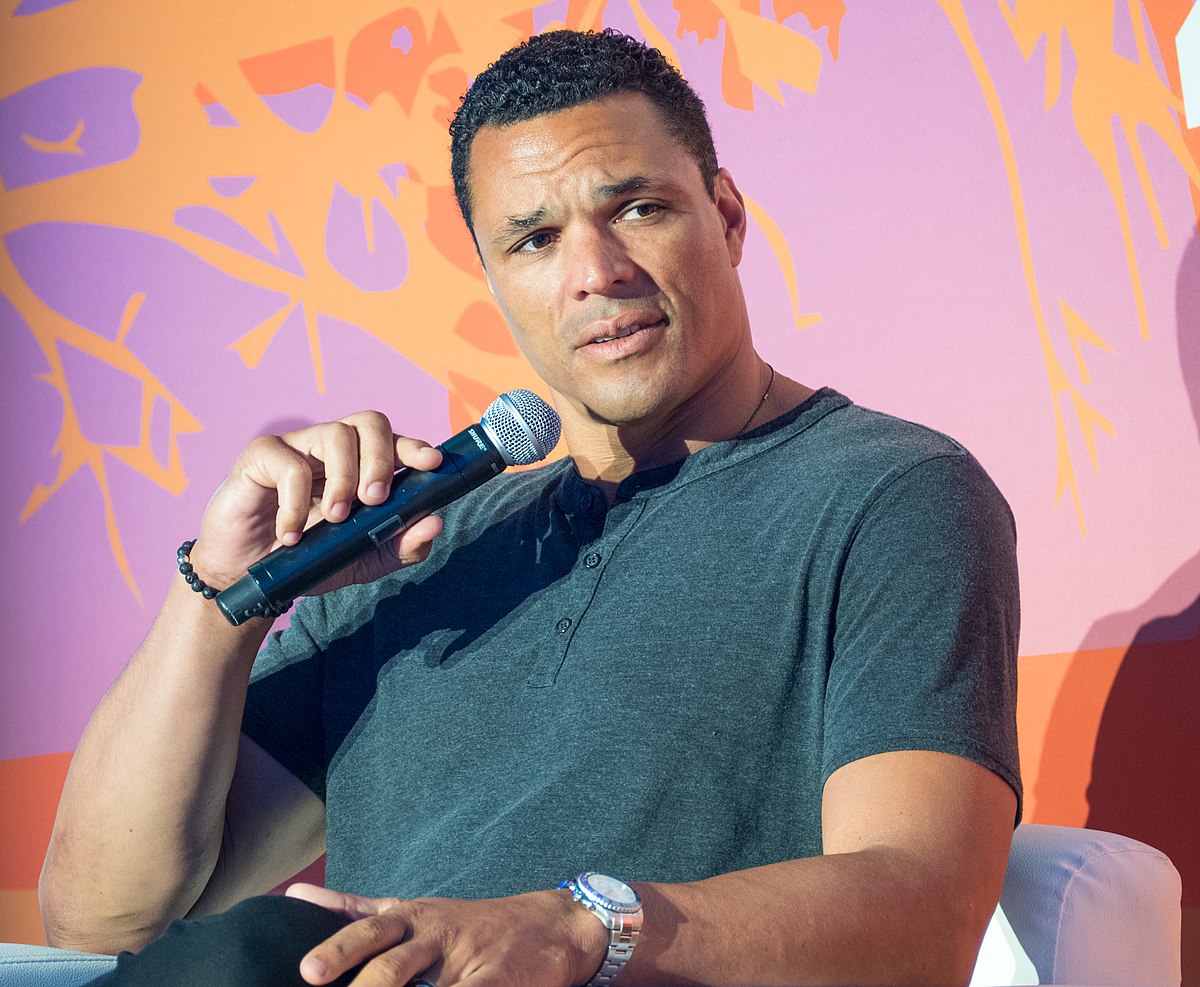 Tony Gonzalez caught 1,325 NFL passes—second only to Jerry Rice for most of all time.  His 15,127 career receiving yards are over 5,000 more than Jason Witten and Shannon Sharpe, who are second on the list among tight ends.  Gonzalez was durable, missing only two games in 17 NFL seasons.  He was consistent, with eight 80-catch seasons.

And he was sustainable, playing in 14 Pro Bowls—a record matched only by Bruce Matthews [Daily Dose, 10/19/16], Peyton Manning and Merlin Olsen.  Gonzalez was the fifth player—and first tight end—in NFL history to amass over 15,000 receiving yards and is tied with Antonio Gates for most career touchdown receptions, with 111.  He holds over 15 NFL records, virtually every Kansas City Chiefs receiving record, and was elected to the NFL’s 2000s All-Decade Team.

Born in Torrance, California, on this date in 1976, Anthony David Gonzalez is the younger of two boys.  Raised in Huntington Beach, California, by a single mother, he did not enjoy team sports as a child, preferring instead to skateboard and surf near the Huntington Pier.  At 11, Gonzalez joined a local Pop Warner youth football team, but hated it and quit midway through the season.  Gonzalez attended Huntington Beach High School [which, in March 2016, set a new national prep record with their 113th straight win in boys’ volleyball].  At the urging of his older brother, Chris,  he returned to team sports and lettered in baseball, basketball and football.

During basketball season his junior year, Gonzalez averaged over 17 points and nine rebounds per game and was named USA Today Honorable Mention All-USA.  As a senior, he averaged 26 points per game, broke the school career scoring record and was named Orange County and Sunset League MVP.  In football, Gonzalez caught 62 passes for 945 yards and 13 touchdowns in his senior year.

He was named All-American at both tight end and linebacker, while also contributing at fullback and defensive end.  “He did everything,” said Steve Mariucci, who coached Gonzalez in college and later served as head coach for two NFL teams.  At the end of his senior year, Gonzalez was voted 1994 Orange County Athlete of the Year, an award he shared with Tiger Woods, who played golf at Western High School in nearby Anaheim.

Gonzalez chose to attend the University of California at Berkeley, where he played both football and basketball.  “As a high school recruit,” said Cal head football coach Keith Gilbertson, “he was as good as I’ve ever seen.”  The Golden Bears struggled in Gonzalez’ first two years in Berkeley and Gilbertson was fired.

He was replaced by Mariucci.  On the hardwood, Gonzalez averaged over five rebounds per game his junior year and helped Cal to the Sweet Sixteen of the 1997 NCAA tournament.  On the gridiron, he caught 44 passes for an average of nearly 15 yards per grab.  Football was clearly his best sport and, after being named consensus All-American, Gonzalez decided to forgo his final year of eligibility and declare for the NFL Draft.

Historically, offensive football has been based on the running game, with tight ends being an important part of the blocking scheme.  Once viewed as a position for a tough, talented blocker [think small offensive tackle], Mike Ditka helped change that perspective when he came into the NFL in 1961.

The first tight end inducted into the Pro Football Hall of Fame, Ditka caught 427 passes over 12 seasons.  Two seasons after Ditka’s arrival in the NFL, John Mackey joined the league.  Considered the finest pass-catching tight end of his era, Mackey scored 38 career touchdowns and had two 50-catch seasons.  Kellen Winslow redefined the position and was the first tight end who played more like a wide receiver than an offensive tackle.  Playing for the San Diego Chargers’ pass-first, run-second “Air Coryell” offense, Winslow caught 319 passes in a four-year stretch in the early 1980s.

On the morning of the 1997 NFL Draft, the Kansas City Chiefs traded their first, third and sixth round picks to the Houston Oilers [now Tennessee Titans] in exchange for the 13th overall pick, which the Chiefs used to select Tony Gonzalez.  After catching 33 passes in his rookie year, he was named the Chiefs’ starting tight end in his second season.  Gonzalez was named to the Pro Bowl for the first time in 1999.

His 93 catches for 1,203 yards in 2000 was the most prolific season by a tight end in league history and, from 2003 to 2006, Gonzalez was the most productive tight end in the NFL.  His best statistical season came in 2004, when he caught an NFL [tight end] record 102 passes for 1,258 yards.  The record stood for eight years, until it was broken by Dallas’ Jason Witten during the 2012 season.  In 2007, Gonzalez surpassed Shannon Sharpe for most career touchdown receptions by a tight end.  The following season, he hauled in his 10,064th reception to break Sharpe’s record for receptions by a tight end.

Prior to the 2009 season, Gonzalez was traded to the Atlanta Falcons in exchange for a second-round draft choice.  Despite catching 83 passes in his first year in Atlanta, he failed to make the Pro Bowl for the first time in a decade.  In 2010, Gonzalez grabbed his 1,000th career reception, and in 2012 became the first tight end in history to score 100 career touchdowns.  Mr. Gonzalez made four Pro Bowl teams during his five years in Atlanta and retired following the 2013 campaign.

If Kellen Winslow redefined the tight end position, Tony Gonzalez took it to a whole new level.  At 6’5”, 248, he was a wide receiver in a lineman’s body.  A defensive coordinator’s nightmare, Gonzalez was the first tight end to line up on the outside, creating mismatches for every defense he faced.

From the hardwood to the gridiron, he paved the way for Gates and Jimmy Graham—basketball players who had not played college football—to find success in the NFL.  Tony Gonzalez played in 277 NFL games, including playoffs.  He was a factor anywhere on the field, but his true dominance was near the goal line.  Gonzalez used his basketball skills to box out a defender and leap for the football like he was going for a rebound.  He knew how to use his body in traffic, was a superb route runner, and always found a way to get open.  Blessed with great hands, athleticism, and excellent footwork, Gonzalez was nearly unstoppable.

His greatness was furthered by tireless preparation and a burning desire to win.  A decade-and-a-half into his career, Gonzalez continued to adhere to the routine that made him a perennial Pro Bowler: an hour of route-running followed by 100 balls a day.  Every day.  His workouts were legendary and film study, intense.

Gonzalez remains diligent about what he puts in his body.  He only eats organic fruits and vegetables, free range chicken, grass fed beef [no more than 18 ounces a week], and fish.  This obsession with excellence is what enabled the greatest tight end of all time to miss only two games in 17 NFL seasons at one of football’s most physically demanding positions.  It will also land him in the Pro Football Hall of Fame.