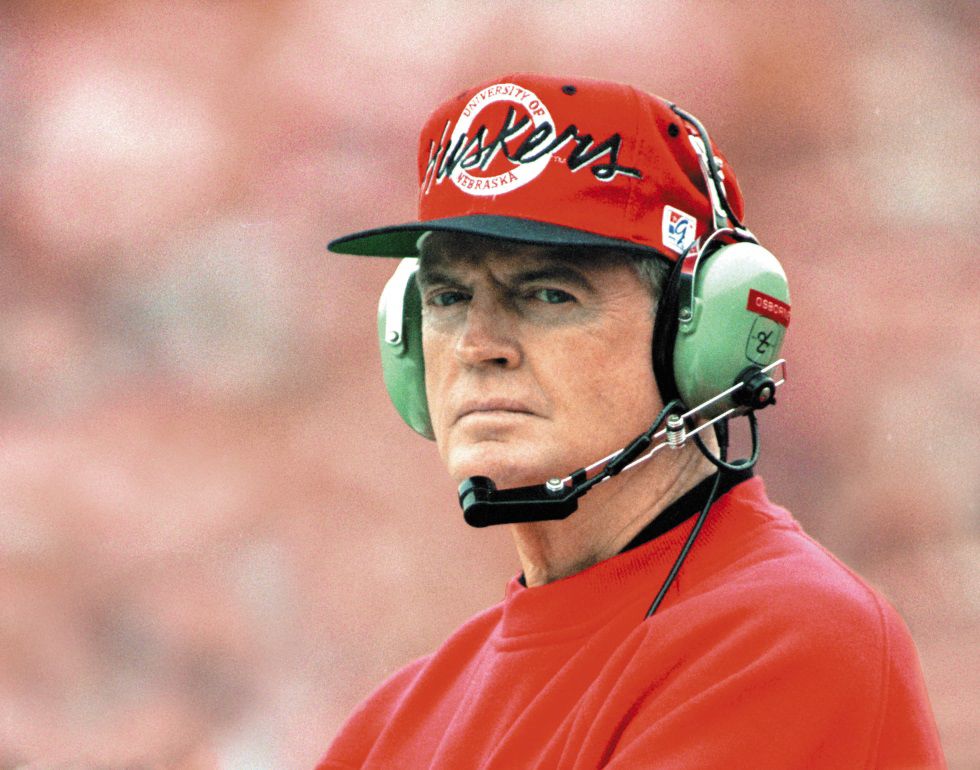 “Character is not inherited, or a trait, it is a choice.” – Tom Osborne

In his quarter-century as head coach at Nebraska, Tom Osborne was a model of consistency. His teams never won fewer than nine games in a season.  The Cornhuskers only finished worse than third in conference or division play once.  NU finished in the top 15 of the final AP poll 24 years out of 25 and was nationally-ranked in every weekly AP poll but three!

Under Osborne, Nebraska was outright national champion in 1994 and 1995, then shared the title in 1997.  The ‘Huskers won or shared a dozen Big Eight Conference titles and one Big 12 crown under Osborne.  In 25 years in Lincoln, Osborne amassed a record of 255-49-3, giving him the best winning percentage [83.6] among active Division I coaches at the time of his retirement.

Tom Osborne got to 250 wins faster than any coach in D1 history.  The longer he coached, the more success he had.  Osborne won national championships in three of his final four seasons and went 60-3 in his last five years as the ‘Huskers head man.  A man of impeccable character and integrity, Tom Osborne always went about things the right way – with class and dignity.

In 1984, top-ranked Nebraska faced number-five Miami in the Orange Bowl.  The ‘Huskers scored a late touchdown to narrow Miami’s lead to 31-30.  Rather than kick an extra point to tie and gain a share of the national championship, Coach Osborne opted to go for two points and the win.  When Turner Gill’s pass fell incomplete in the end zone, Miami gained the victory and the first national championship in program history.

Born in the rural town of Hastings – where Kool-Aid was invented in 1927 — Thomas William Osborne was an outstanding athlete and scholar.  He played football, basketball and won the state discus throw at Hastings High School, and was named 1955 Nebraska High School Athlete of the Year as a senior.  Osborne attended Hastings College, where his grandfather [1901] and father [1930] graduated.

At Hastings – a private, liberal arts NAIA school — Osborne was a four-year letterman in football, basketball and track.  A two-time conference Athlete of the Year, he was voted 1959 Nebraska College Athlete of the Year by the Omaha World-Herald.  Osborne remains the only athlete – male or female – to win that award at both the prep and collegiate level.

In 1964, Osborne joined the Nebraska coaching staff as an unpaid offensive assistant to head coach Bob Devaney.  His only compensation was meals at the team’s training table.  Osborne was made offensive coordinator in 1969.  One year later, his high-powered offense sparked the Cornhuskers to the 1970 national title – the first in program history.  NU repeated as national champion in 1971.

When Devaney stepped down to focus on his duties as athletics director after the 1972 season, he named Osborne as his successor.  Coach Osborne went to work immediately, building one of the most storied programs in college football history.

Osborne’s teams were physical.  Behind offensive lines that produced six Outland Trophy winners during his tenure, Nebraska employed a powerful rushing attack.  The ‘Huskers controlled the football, avoided mistakes, and dominated time of possession.  The defense – known as the Blackshirts in reference to the black jerseys they wore in practice – was punishing and relentless.

Eleven years after his courageous decision to go for two in Miami, Tom Osborne got redemption.  After narrowly losing the national title game to heavily-favored Florida State in 1993, NU beat Miami, 24-17, in the 1994 Orange Bowl to claim Osborne’s first NCAA championship.  The next year, the undefeated Cornhuskers rolled through the regular season, spending all but one week at number one.  The 1995 team – voted the greatest college football team of all time in an ESPN poll – crushed Florida, 62-24, in the Fiesta Bowl to capture its second straight national championship.  After announcing his retirement following the 1997 season, Coach Osborne went out on top, going 13-0 and beating Peyton Manning and Tennessee in the Orange Bowl, 42-17.

Named Coach of the Decade for the 1990s, Tom Osborne was elected to the College Football Hall of Fame in 1999.  The following year, he was given the Jim Thorpe Lifetime Achievement Award.  Elected to Congress in 2000, Dr. Osborne [R] represented Nebraska’s 3rd District until 2007.  Voted the greatest college football coach of all time in an ESPN online poll that same year, Dr. Osborne returned to Lincoln, where he served as Nebraska’s athletics director from 2007 to 2013.

In recognition of his lifetime of service to college athletics, the NAIA named its football championship trophy after Dr. Tom Osborne in 2013.  Like his football teams, Tom Osborne’s coaching staff were the embodiment of consistency.  Assistants regularly turned down head jobs to remain in Lincoln.  Milt Tenopir mentored the offensive line for 29 seasons, while Charlie McBride was at NU for 23 years.  George Darlington, who coached the Blackshirts defense for three decades, is the first assistant coach in D1 history to be involved in 300 wins at one school.

On this date in 1997, Nebraska beat Iowa State, 77-14, in Lincoln.  It was the ‘Huskers’ tenth straight win of the season. After their win in the Orange Bowl in Tom Osborn’s final game, NU finished the year ranked second in the nation.