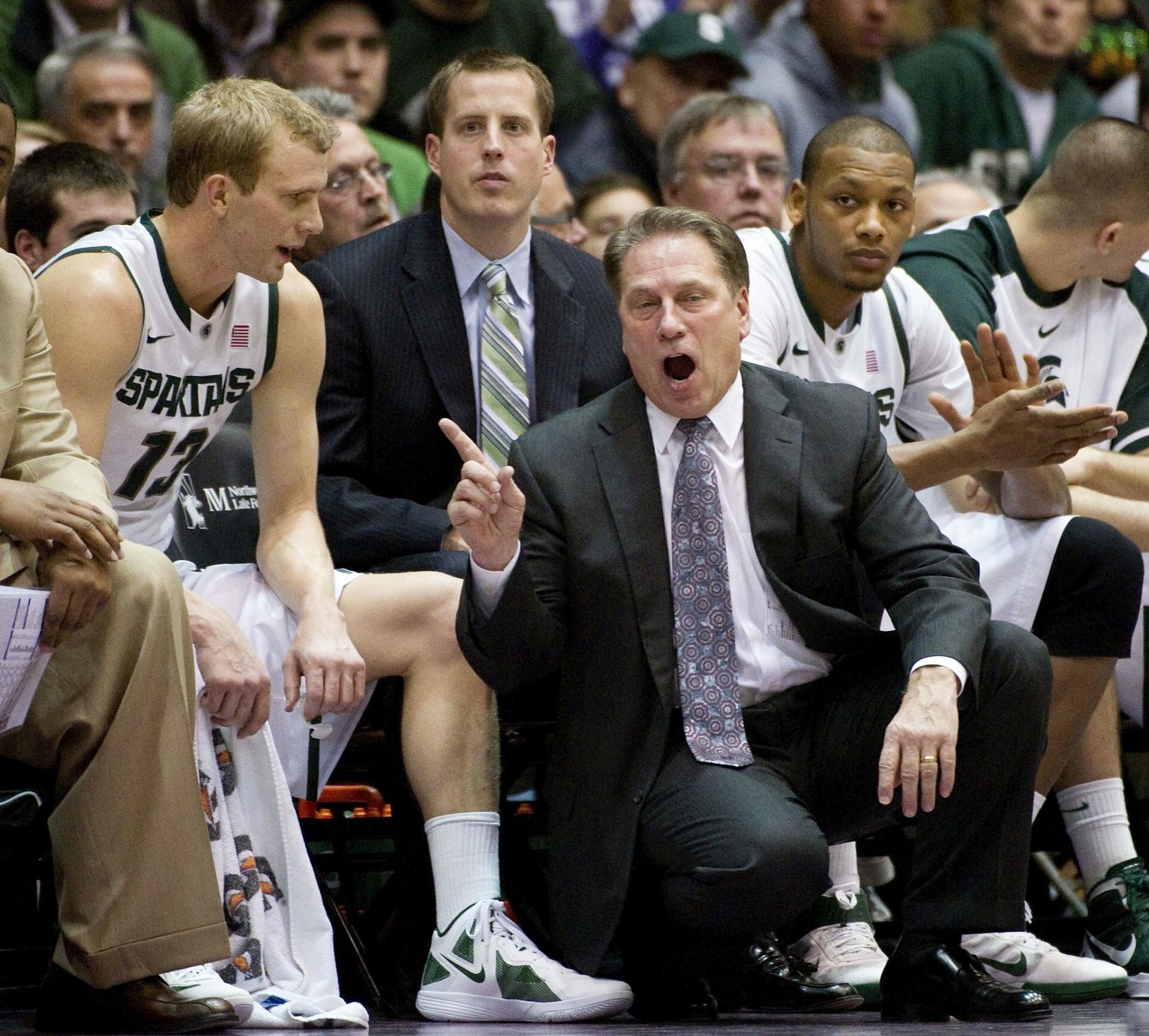 Tom Izzo has never had a losing season as a head basketball coach. A tough-as-nails competitor from the hardscrabble Upper Peninsula of Michigan, Izzo has won nine Big Ten regular-season titles and six conference tournament crowns.  He has won 30 or more games five times, including a career-best 32 last season.  Under Izzo, Michigan State has captured 22 NCAA tournament bids in 24 seasons, going 52-21 in tournament play.  He has led the Spartans to eight Final Fours and the 2000 national title. Now in his 25th season in East Lansing, Izzo came into this campaign with an overall record of 606-232 [.723].  A three-time Big Ten Coach of the Year, Izzo is the winningest coach in MSU history.  Only Indiana’s Bob Knight has won more Big Ten games.  One of the most media-accessible, frank and personable coaches in the business, Tom Izzo is a great ambassador for college basketball.

Tom Izzo has sent 20 players to the NBA, 11 of whom were drafted in the first round.

Izzo has won 20 or more games in 14 of the past 15 seasons.  The lone exception came in 2010-11, when Michigan State won 19.  A no-nonsense advocate of defense and rebounding, Izzo is famed for his war rebounding drill, in which players wear football helmets and shoulder pads.  The Big Ten is a rugged conference and many coaches would pad their records [and soften their schedule] by playing cupcakes.  That does not interest Izzo, who is known for scheduling tough non-conference opponents to better prepare his teams for the NCAA tournament. Born in Iron Mountain, Michigan, January 30, 1955, Izzo attended Iron Mountain High, where he befriended future NFL head coach, Steve Mariucci.  The two were teammates on the football, basketball and track teams, then roomed together at Northern Michigan University.  Mariucci was a three-time All-American quarterback who led the Wildcats to the 1975 Division II national championship.  Izzo walked-on to the basketball team, and as a senior set a school record for minutes-played while becoming a DII All-America guard. Upon graduating NMU in 1977, Izzo spent one season as head coach at Ishpeming High School.  He returned to Northern Michigan, where he served as an assistant for four seasons.  In September 1983, Izzo was named part-time assistant at Michigan State.  He became a full-time assistant three seasons later, then was elevated to associate head coach in 1990.  When legendary MSU coach Jud Heathcote retired after 19 seasons at the helm in 1995, 40-year-old Tom Izzo became the 16th head basketball coach in school history.

Tom Izzo has posted 19 twenty-win seasons, including the last eight.

The 64-year-old Izzo has finished in the top 10 six times.  Entering this season, he had coached 838 games, most in Michigan State history.  Fourteen Mr. Basketball winners have played for Izzo, as have 18 High School All-Americans.  He has mentored seven consensus All-Americans.  Six of Izzo’s players have been named Big Ten Player of the Year, including Cassius Winston, who won the honor last season as a junior.  A 6’1’ point guard from Detroit, Winston opted to forego the NBA draft and return to East Lansing for his senior season. Tom Izzo is Michigan through and through.  Born and raised in the only state that touches four of the five Great Lakes, he is a principled man with an unrelenting work ethic.  Izzo is masterful at bringing out the best in his players.  At the beginning of each season he has his players list their goals on a 3×5 index card, which they sign.  Izzo then pushes them hard to reach those goals.  When they fail to make the sacrifices necessary to attain their objectives, the coach calls them out on it.  Izzo believes that players coaching other players is more effective than coaches coaching players, and he has built one of the best programs in college basketball around that belief.

Tom Izzo was inducted into the Naismith Basketball Hall of Fame September 9, 2016, cementing his status as one of the game’s all-time greats. This Saturday, MSU travels to nearby Rochester, Michigan, to play Oakland University.  It will be the Spartans’ tenth game of this young season.  Tipoff is scheduled for noon ET and the game will be televised on ESPN2.