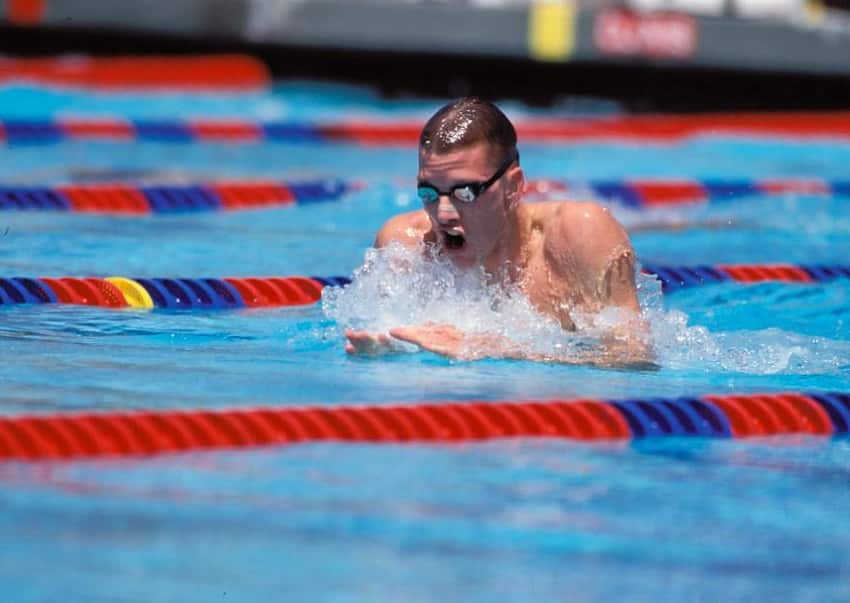 The 400 meter individual medley is quite possibly the most demanding event in swimming.  Thomas Fitzgerald Dolan held the world record in the event for eight years, longer than any swimmer in history.

Born on Arlington, Virginia, on this date in 1975, Dolan started swimming for the Washington Golf and Country Club’s summer team at five.  He became serious when he joined the Curl-Burke Swim Club [now Nation’s Capital Swim Club] and, despite exercise-induced asthma, became one of the best age-group swimmers in the country.  Coached by Rick Curl, Dolan rose to prominence by “following Mike Barrowman’s work ethic and the toughness of Mark Spitz [Daily Dose, 9/4/15].”  He attended Yorktown High School—alma mater of Katie Couric, who graduated the year Dolan was born.  Upon graduation, he followed in the footsteps of Barrowman, who also swam for the Curl-Burke Club, and enrolled at the University of Michigan.  Led by nine-time Big Ten Coach of the Year Jon Urbanchek, the Wolverines were in the midst of a “Decade of Dominance,” winning ten conference titles in a row between 1986 and 1996.  Dolan was able to train with Eric Namesnik, a UM alum who had dominated the 400 IM during his college career and set the American record in the event four times.

As a Michigan freshman, Dolan won four events at the 1994 Spring Nationals, a feat which had not been accomplished since Spitz in 1972.  In the 400 IM, he went 4:13.52 to break Namesnik’s American record.  At the World Championships in Rome later that year, Dolan was the youngest male member of the U.S. team.  Competing in his first international meet, he broke the world record, going 4:12.20 in the 400 IM.  Dolan was capped his first year in Ann Arbor by being voted Big Ten Swimmer of the Year.  In 1995, Dolan won NCAA titles in the 500 freestyle, 1,650 freestyle, 400 IM and the 800 freestyle relay.  He became the first man since Matt Biondi to set three American records in a single NCAA championship meet.  “Usually, you see records broken by tenths of a second,” said Urbanchek.  “He broke them by two or three seconds.”  Dolan helped Michigan capture the 1995 NCAA championship and ended the season by being named Big Ten Swimmer and Big Ten Athlete of the Year.    Dolan defended his NCAA title in each of those events in 1996 in route to being named UM Male Athlete of the Year.  He finished his career at Michigan as a nine-time NCAA champion, 15-time All-American and two-time Big Ten Swimmer of the Year.  In addition, he was twice voted Swimmer of the Year by U.S. Swimming.  Mr. Dolan left UM following his junior year to focus on training for the 1996 Olympics.

The 400 IM is grueling; a distance event swum at a sprinter’s pace.  The event requires precision in four strokes—butterfly, backstroke, breaststroke and freestyle—and exposes a swimmer’s weakness.  “You train long yardage and in four events,” says Michelle Griglione, a NCAA champion for Stanford who grew up in Alexandria.  Tom Dolan had a partially blocked windpipe, restricting his oxygen intake by 20 percent.  It was hard for him to breathe, which is not a problem if he were on the chess team.  The lack of oxygen led to occasional blackouts and once landed him in the hospital.  “He had an incredible tolerance for pain,” recalled Urbanchek, who coached 26 Olympic swimmers.  In preparation for the Atlanta Games, Dolan trained with Club Wolverine, an Ann Arbor based program that includes Michael Phelps [Daily Dose, 6/30/16] and Peter Vanderkaay as alums.  At the 1996 U.S. Olympic Trials, Dolan qualified in three events—taking gold in each—and won the “Performance of the Meet” award.

In the 1996 Atlanta Games, Dolan edged his trainer partner Namesik to win gold in the 400 IM.  He also finished seventh in the 200 IM.  Four years later in Sydney, he set a new world record while successfully defending his title to become the second swimmer in history to win successive 400 IM gold medals [a feat equaled by Michael Phelps in 2008].  Dolan went 4:11.76 in Sydney, bettering the world mark he had held since 1994.  He was the world record holder for eight years, when Phelps broke it in 2002.  Phelps would go on to lower his own mark seven more times.  Dolan retired after the 2000 Games with three Olympic medals; two gold and one silver.  He won 14 national championships, six international championships, and had a decorated college career.  Mr. Dolan was named to the U.S. Swimming “Team of the Century” in the 400 IM, is a member of the Virginia Sports Hall of Fame, and was inducted into the International Swimming Hall of Fame in 2006.

Following retirement from his competitive swimming career, Dolan worked for the USOC, helping other competitive athletes transition from sports to outside careers.  He then spent five years as an investment banker.  Feeling a need to make a real difference in the world, Mr. Dolan left the world of high finance and opened the Tom Dolan Swim School in Dulles, Virginia, creating a new generation of swimmers.  “Traditionally, swim programs work backwards, putting kids in the water to see how fast they can swim from one end of the pool to the other before focusing on technique,” says Dolan.  “I am reversing that at my school by first teaching them how to swim.” 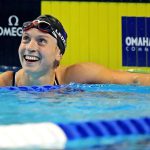 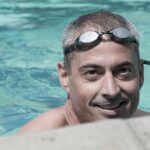 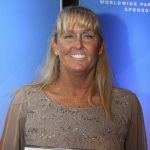 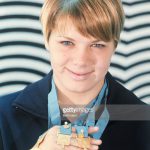 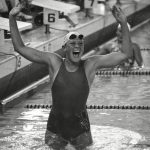 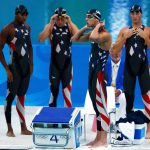 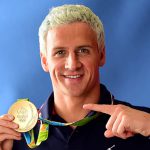