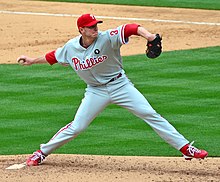 June 3 is a historic date in major league baseball history.

On this date in 1925, Eddie Collins, a second baseman for the Chicago White Sox, became the sixth player in history to gather 3,000 career hits.  “Cocky,” who also played for the Philadelphia Athletics during his 24-year major league career, was player-manager for Chicago when he collected his historic hit—a double–off Washington Senators’ ace, Walter “Big Train” Johnson [Daily Dose, August 7].

Collins played with the infamous “Black Sox” team that threw the 1919 World Series [Daily Dose, February 12] but was not accused of being part of the conspiracy.  In 1930, the Philadelphia Phillies released Grover Cleveland Alexander, one of the most dominant pitchers in baseball during his 21 big league seasons.  “Old Pete,” who also played for the Chicago Cubs and St. Louis Cardinals, holds the National League record for shutouts (90)  and wins (373).  He was 0-3 and had thrown a little less than 22 innings the season the Phillies let him go.  On this date in 1932, New York Yankees first baseman Lou Gehrig became the first player in modern history to hit four home runs in one game.

Batting fourth–behind Babe Ruth [Daily Dose, September 24]–the left-handed hitting slugger had four hits—all homers—in six trips to the plate.  His last at-bat came in the ninth inning, where he hit a long fly ball to the deepest part of Shibe Park in Philadelphia that nearly became his fifth dinger of the day.  The Yankees went on to beat the Athletics, who used five pitchers that day, 20-13.  Gil Hodges, who hit four home runs in a single game for the Brooklyn Dodgers in 1950, later said, “Gehrig had one advantage over me.  He was a better ballplayer.”

In 1953, Alexander Joy Cartwright, Jr. was officially declared the inventor of baseball by the 83rd United States Congress, debunking the myth that Abner Doubleday invented the game.  Cartwright, “The Father of Baseball,” was inducted into the National Baseball Hall of Fame in 1938, forty-six years after his death.  Stan Musial’s three-run home run on this date in 1955 was the 300th of his career.  “Stan the Man” hit his shot off Dodgers’ right-hander Johnny Podres in the fifth inning of a 12-5 loss at Ebbets Field in Brooklyn [Daily Dose, October 30].  Mr. Musial hit 475 home runs during his Hall of Fame career.  On this date in 1971, Chicago Cubs’ lefthander Ken Holtzman threw the second no-hitter of his career in a 1-0 victory over the defending National League champion Reds at Riverfront Stadium in Cincinnati.  Holtzman walked four and struck out six to earn his fourth win of the season.  In 1972, the New York Yankees scored eight runs in the top of the 13th inning to beat the White Sox, 18-10, at Comiskey Park in Chicago.  Davey Johnson became the first player in history to belt two pinch-hit home runs in the same season when he took Terry Forster deep for a walk-off homer in 1978 that helped the Philadelphia Phillies beat the Los Angeles Dodgers, 5-1.

The New York Mets made Darryl Strawberry the first overall pick in the 1980 MLB Draft on June 3.  “Straw” played in eight All-Star Games and won four world championships in 17 major league seasons.  In 1987, the Houston Astros and Chicago Cubs combined to hit three grand slam homers in a 22-7 Chicago victory at Wrigley Field.  Chicago’s grand slams came from Brian Dayett and Keith Moreland, while Billy Hatcher belted a four-bagger for Houston.  Two significant events occurred on June 3, 1989.  First, Nolan Ryan of the Texas Rangers gave up a single to Harold Reynolds, the first batter he faced, in the bottom of the first inning before holding the Seattle Mariners hitless for the rest of the game.

It was the eleventh of 12 career one-hitters the 42-year-old Ryan would throw in his career, the most of all-time.  Then, legendary broadcaster Vin Scully [Daily Dose, November 27] called 33 innings in one day in two different cities.  He did play-by-play for NBC’s Game of the Week in St. Louis, where the Cardinals beat the Chicago Cubs, 6-5, in a ten-inning contest that lasted three-and-a-half hours.  Next, he flew in a private plan to Houston, where the Astros were playing host to the Dodgers, whose games Scully called on radio.  He made it to the booth just as the national anthem was finishing and called the game, which lasted over seven hours and ended at 2:52 am the following day.  Houston won 5-4, on a walk-off single by shortstop Ramon Ramirez in the bottom of the 22nd inning.