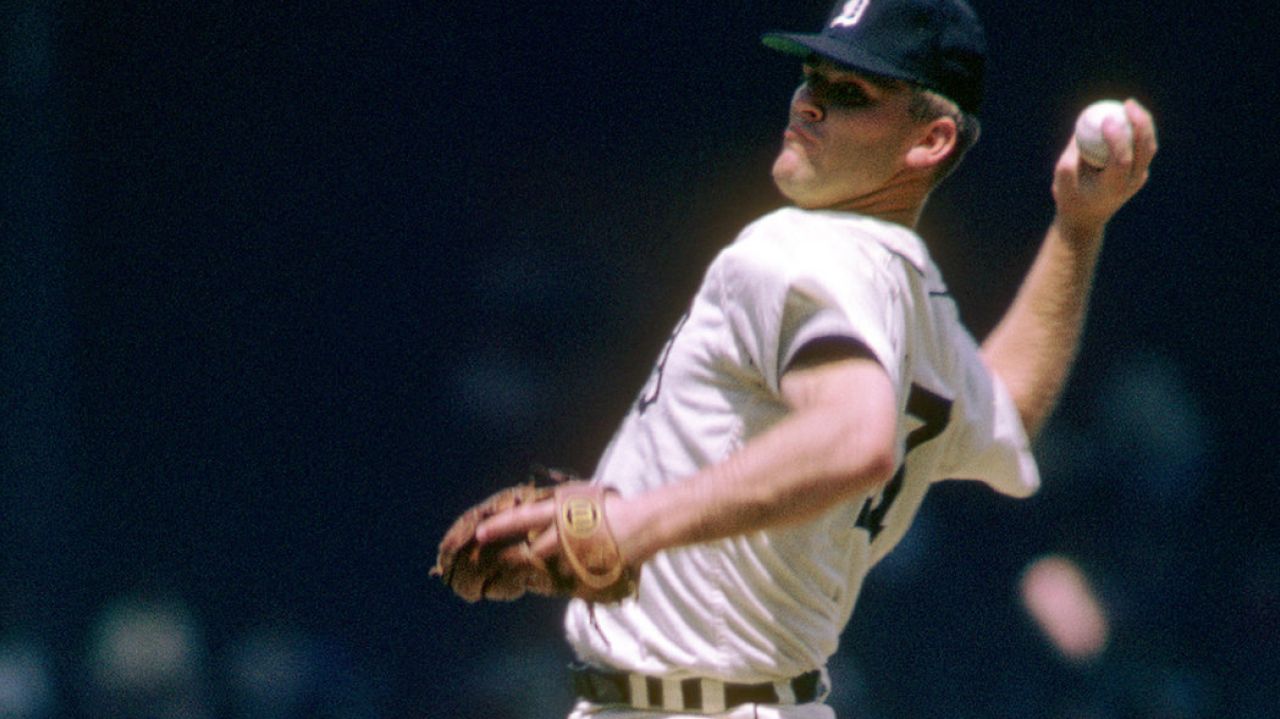 1968 was the Year of the Pitcher  in Major League Baseball.

Arguably the most historic year in more than a century, the world lost Martin Luther King and Robert Kennedy to assassins” bullets in 1968.  It was the year North Vietnam launched the Tet Offensive.  The Civil Rights Movement was at its peak and Women’s Lib was gaining traction.  American sprinters Tommie Smith and John Carlos delivered the Black Power Salute on the medal stand at the Mexico City Olympics.  The Beatles released the White Album, Rowan & Martin’s Laugh-In debuted, and In the Heat of the Night won five Academy Awards.

It was against this backdrop that baseball witnessed the greatest single-season pitching performances – and offensive power outages – in major league history.  In the last season without playoffs and the year Hank Aaron hit his 500th homer, MLB pitchers threw 339 shutouts.  There were 82 1-0 games, and no player in either league scored 100 runs.  In 1968, big league baseball compiled the lowest league-wide batting average in the history of the game, at .237.

Mickey Mantle was in his final season, and his once-mighty New York Yankees hit an all-time franchise low .214.  Carl Yastrzemski won the AL batting title with a .301 average and had to catch fire in the season’s final month to do so.  Danny Cater was second at .290.  The National League had three 20-game winners and Mets rookie Jerry Koosman won 19.  There were four 20-game winners in the American League.

It was a great time to be a pitcher.  They got away with throwing the spitter, the mound was high, the strike zone was big and the ballparks were huge.  “I remember 1968,” recalled former player-turned-broadcaster Ken Harrelson.  “It felt like every pitcher was right on top of you that year.  It felt like they weren’t 60 feet, six inches away.  It felt like they were 40 feet away.”

In the year of the pitcher, Bob Gibson was the pitcher of the year.  Gibby tossed 13 shutouts in 1968.  In one stretch, he gave up just two runs in 95 innings: one on a wild pitch, the other on a bloop hit.  He pitched 47 consecutive scoreless innings, at the time the third-longest scoreless streak in history.  Gibson threw 28 complete games in 34 starts, compiling a WHIP of 0.85.  One of the fiercest competitors ever to climb the hill, Gibson was not removed for another pitcher the entire season.  His record was a deceiving 22-9.  In those nine losses, the Cardinals scored only 12 runs, were shut out three times, and batted .147.

Denny McLain won 31 games for the Detroit Tigers, becoming baseball’s first 30-game winner since Dizzy Dean in 1934 – and only one since.  Having perfected a slider he learned from Johnny Sain, who led the NL in wins in 1948 before becoming the Tigers pitching coach, McLain went 31-6 with a 1.96 ERA.  He amassed a gaudy strikeout-to-walk ratio of 4.44-to-1, which stood as a club record until 2016 when it was eclipsed by Justin Verlander.  A fun-loving free spirit who played the organ when he wasn’t embarrassing AL hitters, McClain allowed only 241 hits in 336 innings and struck out 280.

In the A’s inaugural season in Oakland, future hall of famer Catfish Hunter threw the American League’s first perfect game since 1922.  On September 17, 1968, San Francisco’s Gaylord Perry tossed a no-hitter against St. Louis.  The next day, the Cardinals returned the favor, when Redbirds right-hander Ray Washburn did the same to the Giants.  It was the first time in MLB history that no-hitters had been pitched in successive games.  Even the All-Star Game – which was played indoors [Astrodome] for the first time —  was a low-scoring affair.  The NL won, 1-0 when Willie Mays scored on a double play.  It is still the only Midsummer Classic without an RBI recorded.

The 1968 World Series pitted the St. Louis Cardinals against the Detroit Tigers.  Each club’s ace – Gibson for the Cards and McLain for Detroit – had won their league’s Cy Young and MVP Awards, the only time in history pitchers in both leagues have swept those awards.  Gibby, who had anchored the Cardinals staff that allowed the fewest runs in history during the regular season, set a World Series record with 17 strikeouts in Game One.  But it was Mickey Lolich, not McLain, who became Detroit’s hero.  The Tigers portly portsider became the only pitcher ever to throw three complete-game victories in a World Series.  Lolich pitched a five-hitter in Game 7 on two days rest and was named Series MVP.

Five decades ago, major league pitching was at its apex.  Cleveland’s Luis Tiant – El Tiante – recorded the lowest ERA [1.60] in American League history.  The Cuban right-hander allowed an all-time low batting-average-against of .168 and put together 41 consecutive scoreless innings.  Dodgers ace Don Drysdale pitched a record six straight shutouts and 58-and-two-thirds consecutive scoreless innings.  Juan Marichal didn’t get one first-place vote for the NL Cy Young Award despite going 26-9, with a 2.43 ERA, 30 complete games, and allowing only 46 walks in 326 innings.  That’s because Gibson posted the greatest ERA – 1.12 – in the modern era.

To resurrect offensive production following the 1968 season, MLB lowered the mound from 15 inches to its current 10 inches and a smaller strike zone was enforced.  Five years later, the American League implemented the DH.  Offenses recovered and never sank to those depths again.  Today, the home run is at the center of the baseball universe and pitching a complete game is all but extinct.  In 1968, there were nearly 5,000 fewer home runs than in 2017 – 1,995 total – and only seven players hit 30 or more.  In 2017, 33 players hit at least 30 homers and five hit at least 40.