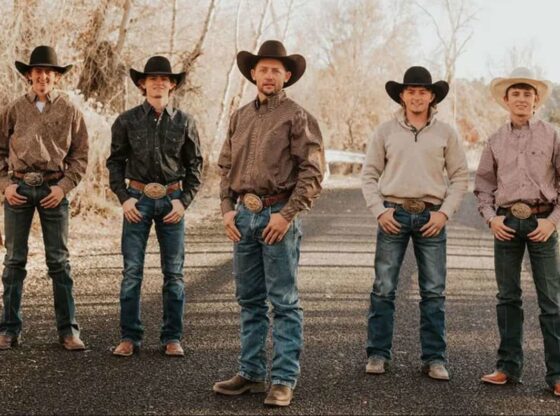 The Wrights are the first family of rodeo.

Bill and Evelyn Wright own and operate a cattle ranch in Milford, a small town in southwestern Utah.  Devout Mormons, they had 13 children in 23 years – six girls and seven boys.  Bill had rodeoed in high school and college – and toured professionally for a while  – but had to give it up when the kids started to come along.

A family of ranchers, the Wrights have carried on the tradition of the western way of life since the mid-1850s.  All of Bill and Evelyn’s sons are rodeo cowboys.  The eldest, Cody, was a high school rodeo champion.  He accepted a scholarship to the College of Southern Idaho to train under coach Shawn Davis, a three-time world saddle bronc champion.

Cody joined the Professional Rodeo Cowboys Association [PRCA] in 1998.  In 2003, he qualified for the National Finals Rodeo – the Super Bowl of the sport – and finished third in the world standings.  Only the top 15 cowboys qualify for the season-ending National Finals Rodeo [NFR].  Cody Wright has qualified 13 times in his career, including a dozen in a row from 2003 to 2014.  In 2008 and 2010, he was crowned saddle bronc world champion.

Bill and Evelyn’s boys are the sixth generation of Wrights to run the family ranch.  “Riding broncs and herding cows is what they know,” says Bill.  Twin sons Jesse and Jake are a dozen years younger than Cody.  After being named 2009 Saddle Bronc Riding Rookie of the Year, Jesse Wright captured the world title in 2012.  Jake, a former state high school wrestling champion at 145 pounds, is two minutes older than his twin.  A six-time NFR saddle bronc qualifier, Jake Wright finished second in the world in 2013.

Spencer Wright joined the PRCA in 2012, the same year he garnered Rookie-of-the-Year honors.  The youngest of the riding brothers, Spencer earned his first trip to the NFR a week shy of his 24th birthday, in 2014.  The former National High School Saddle Bronc Riding champion came into the competition 13th in the world standings.  Unfazed by the pressure of rodeo’s big-money event, Spencer Wright pulled off the biggest comeback in saddle bronc riding history to win the gold buckle in dramatic fashion.  No cowboy had ever come from further back than fifth to capture the world title.

Evolved from the task of breaking and training horses to work the cattle ranches of the Old West, saddle bronc riding is rodeo’s purest event.  It may be harder than both bull riding and bareback riding.  More poetry than chaos, saddle bronc requires balance and technique, rhythm and guts.  “Saddle bronc is the quintessential rodeo sport,” says Jim Valenzuela, a former collegiate rodeo cowboy.  With only a thick rein attached to his horse’s halter, a rodeo cowboy tries to stay seated in his saddle for eight seconds while holding on to the rope with only one hand.  If he touches any part of the horse or his own body with his free hand, the cowboy is disqualified.

While Orville and Wilbur soared as the first in flight, the Wright Brothers of Utah made rodeo history.  In 2014, Cody, Jake, Jesse and Spencer qualified for the NFR.  They are the first set of four brothers ever to qualify for the NFR – let alone in the same year.  Riding bucking horses the Wright Way, the family finished the 2014 season with four members in the top nine in the year-end world standings.  Jake finished fifth, Jesse eighth, and Cody ninth.

Cody Wright has four sons, all of whom compete in rodeo.  The eldest, Rusty, rode his first sheep as a preschooler.  In first grade, his uncles Jesse and Jake bet him a piece of gum he couldn’t ride a steer.  Rusty took the challenge — but never got the gum.  As a high school sophomore, he got on his first bucking horse and never looked back.

“After that, I knew exactly what I wanted to do,” said Rusty.  “I got really hungry for rodeo.  I watched my dad go from the bottom of the rankings to the top while staying humble.”  A two-time National High School Saddle Bronc Riding Champion, Rusty Wright was named 2014 PRCA Rookie of the Year.

Rusty has three younger brothers: Statler, Stetson and Ryder.  Stetson won the 2015 National High School title, while Ryder was named PRCA rookie of the year in 2016.  The following year, Ryder Wright won the 2017 world saddle bronc title while becoming the youngest champion in history.  The 19-year-old earned $284,938, breaking the record for most money won in a saddle bronc riding season.  At the 2017 NFR, Ryder won four of ten rounds, placing in eight of them.

The Wrights travel the rodeo circuit together.  “Everyone works very hard in this family,” said Rusty, who spends over 275 days a year competing.  “Sometimes people think when they hear the last name ‘Wright’ that everything was handed to us.  We each work very hard and must earn our place like everyone else competing in the sport.”

In December 2016, Cody Wright competed with sons Rusty and Ryder to try to tame the toughest bucking stock the NRCA has to offer.  The only two-time world champion in the NFR field in Las Vegas, Cody was also the only contestant who was almost 40.  And, he was the only grandfather who got on a bucking horse at the Thomas & Mack Center.  Nine months earlier, Rusty became a first-time father — to Rookie Scott Wright, born in March 2016.

Saddle Bronc success is not limited only to the men in the Wright family.  Bill and Evelyn’s daughter Rebecca is married to CoBurn Bradshaw, who won the 2014 national collegiate title competing for Western Texas College.  Bradshaw turned pro the following year and was named 2015 PRCA Rookie of the Year, the fourth family member to earn that honor.  CoBurn Bradshaw has qualified for the NFR in each of his first three seasons as a pro.  In 2017, he finished third in the world in saddle bronc riding.

It’s no wonder the saddle bronc championship buckle always seems to end up in southwestern Utah.