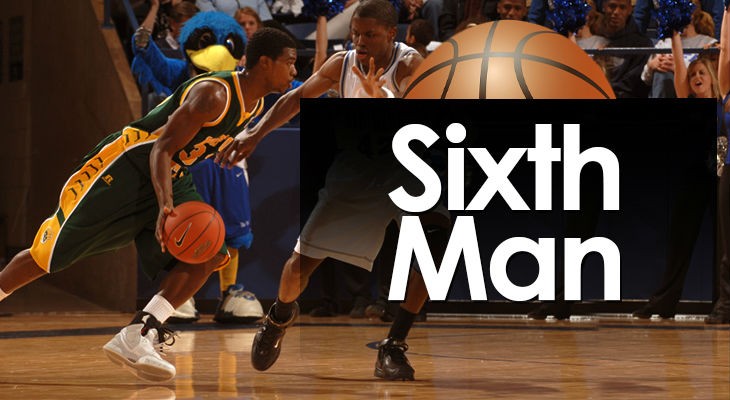 The Sixth Man is one of the most important positions in basketball.

Not a starter but the first player off the bench, the sixth man plays more than the other reserves.  The best sixth men can play multiple positions and are so talented they could start for most teams.

The best non-starter on the team, the sixth man often exploits match-ups against the other team’s second unit.  A good sixth man is an impact player.  When he steps onto the floor, this player should be looking to change the game.

The sixth man has to stay in the game mentally, as he never knows when he will be called upon.  It is not as important who starts the game as who is on the floor when the game is on the line.  The best sixth men are on the floor at crunch time.  “It’s not how much time you’re in the game,” said 1997 NBA Sixth Man of the Year John Starks.  “It’s what you do with that time.”

Red Auerbach invented the sixth man position.  The legendary Boston Celtics coach first used the role for guard Frank Ramsey, who played behind the hall-of-fame backcourt duo of Bob Cousy and Bill Sharman during the early years of the Celtics dynasty.  One of Boston’s best players, Ramsey felt most comfortable coming off the bench and was often on the floor at the end of close games.

The Celts not only invented the position, they perfected it.  Boston sixth men have included Paul Silas, Kevin McHale, Bill Walton and James Posey.  The greatest sixth man in history is John Havlicek.  A superb athlete, Hondo could play small forward or shooting guard.  A 13-time All-Star and franchise leader in points and games played, the superbly-conditioned Havlicek helped the Celtics to eight NBA titles.  Hondo revolutionized the sixth man position during his 16-year career.

Most great teams have a solid sixth man.  It is a sign of depth.  Toni Kukoc, who could play all five positions on the court, helped the Chicago Bulls to three world championships in the 1990s.  Mano Ginobili, a 6’6” shooting guard, came off the bench to lead the San Antonio Spurs to four NBA titles.  Before he became a perennial MVP with the Houston Rockets, James Harden filled the sixth man role for the Oklahoma City Thunder.

Since 1983, the Sixth Man of the Year Award has been presented annually to the NBA’s best substitute.  Voted on by sportswriters and broadcasters throughout the league, the 2018 recipient will be announced this evening.  Each judge casts a vote for first, second and third-place selections.  First place votes are worth five points, second is worth three points, and third place votes earn one point.   The player earning the most points [regardless of how many are first place votes] wins.  To be eligible, a player must come off the bench in more games than he starts.

Philadelphia forward Bobby Jones was the first winner, while Boston produced the next three Sixth Man of the Year Award winners.  Kevin McHale earned back-to-back honors in 1984 and 1985.  The following season, Bill Walton was named Sixth Man of the Year.  Walton, the 1978 NBA MVP, is the only player in history to win both the MVP and Sixth Man awards.  He and McKale are the only two Sixth Man recipients also enshrined in the Naismith Hall of Fame.

Past NBA Sixth Man of the Year recipients include former Phoenix Suns Eddie Johnson, Danny Manning and Leandro Barbosa.  McHale, Ricky Pierce and Detlef Schrempf are two-time winners.  Jamal Crawford, a 6’5” point/shooting guard, is the only three-time winner in the 36-year history of the Sixth Man award.

The best sixth men are versatile players willing to sacrifice for the good of the team.  Jones, Pierce, and Schrempf were former starters who were named All-Stars as sixth men.  Walton accepted his role willingly and helped Boston to the 1986 NBA title.

Sixth men come in all shapes, sizes and styles of play.  Spud Webb and Muggsy Bogues were diminutive energizers.  Jon Barry and Rodney Rogers were scorers.  Vinny Johnson helped Detroit to NBA titles in 1989 and 1990.  The mercurial guard heated up so fast he was dubbed The Microwave.

Tracy McGrady came off the bench for most of his three seasons in Toronto before blossoming into an All-Star in Orlando.  In 1997, 19-year-old rookie Kobe Bryant served as the Lakers sixth man while becoming the youngest starter in the history of the NBA All-Star Game.

Born on this date in 1964, former Charlotte Hornets guard Dell Curry was named 1994 NBA Sixth Man of the Year.  A charter member of the franchise, Curry retired in 2002 as the Hornets all-time leader in points and three-point field goals made.