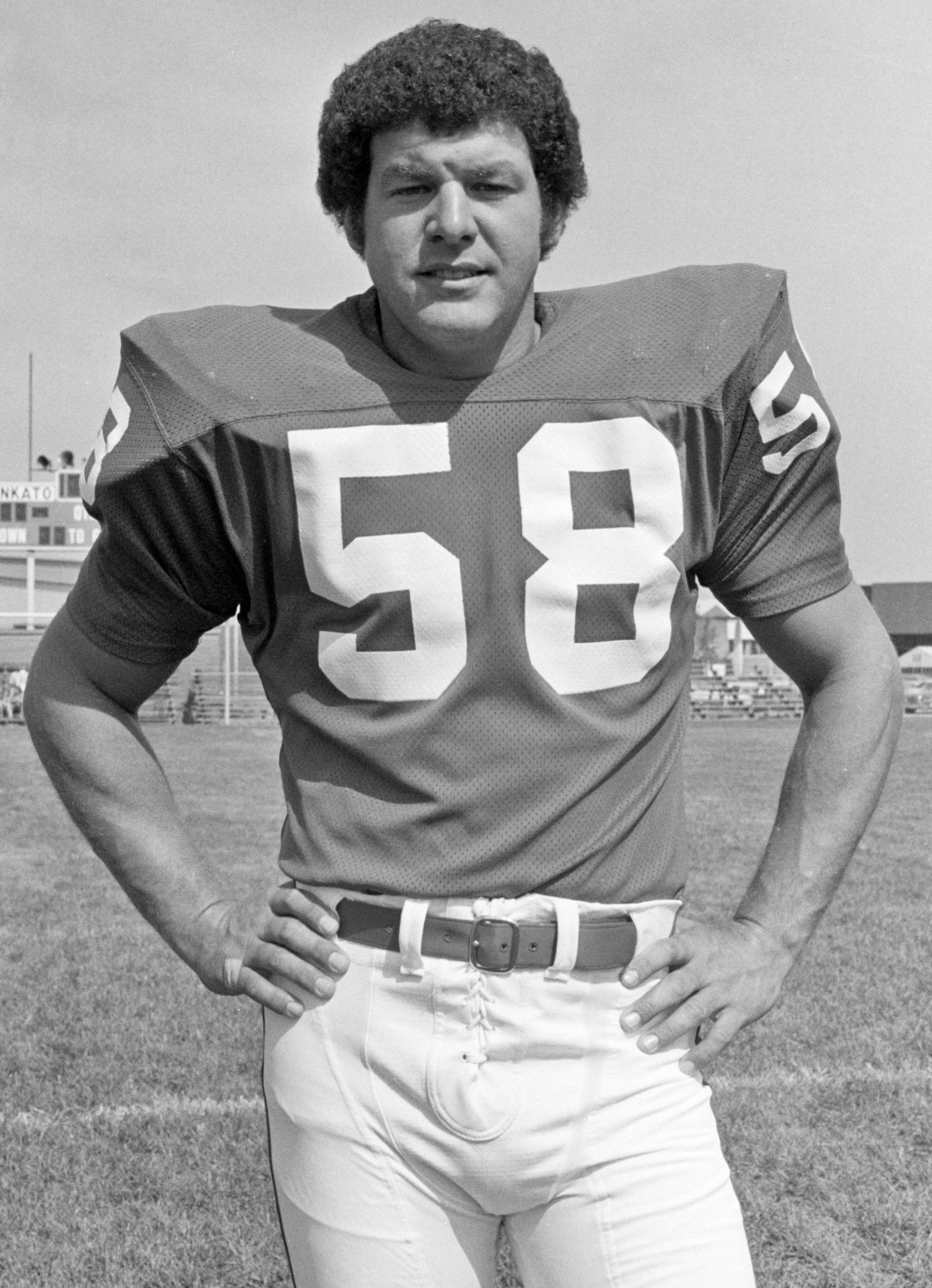 The Hilgenbergs are an Iowa Hawkeye football family legacy like no other.

Jerry Hilgenberg was the first of six Hawkeyes in his family – all lineman, mostly centers – to play for Iowa.  Younger brother Wally, sons Jim, Jay and Joel, and Wally’s son, Eric all followed in his path.  Between them, players named Hilgenberg have won 19 varsity letters at Iowa.  Jerry, Wally and Jay were named First Team All-Big Ten.  Joel was a two-time Second Team All-Big Ten pick.  They combined to play 39 seasons in the NFL, starting 375 games while playing in five Super Bowls and eight Pro Bowls.

Jerry Hilgenberg’s high school in tiny Wilton, Iowa, was so small that it didn’t have football until his senior year.  A year later, he tried out at the University of Iowa as a quarterback, eventually switched to center, and by the time he was a senior in 1953, he was an All-American.  As a senior, Jerry was captain of the Iowa baseball team.  When it was time to receive his letterman jacket, he ordered the smallest size available and gave it to his 11-year-old brother, Wally.  “I got to wear that letter jacket with the big “I” on it,” said Wally, who was 11 years Jerry’s junior.  “That was a pretty big deal in Wilton, Iowa.”

Wally and Jerry’s father, Curly, was a pretty fair baseball player who once bashed three hits in the same game off a hard-throwing right-hander from Van Meter by the name of Bob Feller.

Wally Hilgenberg played basketball, baseball and ran track in high school, but football was his best sport.  Lightly recruited out of Wilton High, Iowa offered him a combination athletic-academic scholarship.  A two-way player at guard and linebacker, Wally’s defensive coach was his brother Jerry, who had returned to Iowa City following a stint in the Air Force.  After earning All-American honors as a senior, Hilgenberg was selected in the fourth round of the 1964 NFL draft [48th overall] by the Detroit Lions.  He was traded to Pittsburgh in 1968, but was waived before ever playing a game for the Steelers.

Hilgenberg was picked up off waivers by the Minnesota Vikings, where he played for another dozen seasons.  He was one of 11 players to appear in all four of the Vikings’ Super Bowls before retiring in 1979.  Wally Hilgenberg died of ALS in September 23, 2008.  Four days earlier – on his 66th birthday – Mr. Hilgenberg watched his grandson, Luke Lindahl, play in an eighth-grade football game for New Life Academy outside Minneapolis.  Continuing the Hawkeye legacy, Luke Lindahl went on to play linebacker at Iowa.

Jerry Hilgenberg was the legendary Forest Evashevski’s first All-American at Iowa.  He played center, and taught his boys the position.  The eldest, John, snapped at Iowa in the mid-1970s.  He was followed by Jay, who played 13 seasons in the NFL, then Joel, who played ten years with the New Orleans Saints.  Jay and Joel were teammates with the 1993 Saints, one season after Joel was voted to the Pro Bowl.  “We’re probably the only family that plays catch not facing each other,” said Jay.

Jerry Hilgenberg was inducted into the Iowa Sports Hall of Fame in 1995.  His brother, Wally, and sons, Jay and Joel, were inducted in 2003.

Jerry Hilgenberg and his wife, JoAnn, raised three sons, all of whom played Big Ten football.  According to Jay, who turned 60 this past March, it’s in the genes.  “We’re like a good line of dogs.  My mom and dad, they make good football players.”

The Hilgenberg house was a snapping sanctuary.  In the mid-70s, Jerry and JoAnn would watch Joel play junior high games on Thursdays, Jay in high school, Jim in college on Saturdays and Wally on Sundays.  The family would gather around the television to watch Vikings games.  “It was like a ritual,” Jay recalled.  “We were pretty intense.  No one ever talked except to discuss the different defenses.”

Jay Hilgenberg was in the middle of the best offensive line in modern Bears history, the one that helped pave the way to the Super Bowl championship that capped the historic 1985 season.  In nine years as starting center, the Bears led the league in rushing four times, finished second once and third another time.  Hilgy’s seven Pro Bowls are tied for fifth all-time among centers.

At 6’3”, 260 pounds, Hilgy was undersized but possessed a huge heart.  He went undrafted out of Iowa in 1981 and made the Bears as a long snapper, then took over as starting center midway through the 1983 season.  His path to excellence was difficult but not without precedent for a pivot.  Jim Otto, who is probably the greatest ever to play the position, wasn’t drafted.  Neither were Hall of Famers Jim Langer or Mick Tinglehoff.  Same for Jeff Saturday, Bart Oates and Kent Hull, who went on to play in a combined 14 Pro Bowls.

Mara Hilgenberg, Jay’s daughter, played volleyball at Iowa.  “She’s got a little bit of her dad in her,” said her coach, Sharon Dingman.  “A little feistiness, a little sass…that ‘Hit ‘em in the mouth’ kind of attitude.

Jay Hilgenberg served as Joel’s backup for a year in New Orleans.  After 12 seasons in the NFL, he was training for one more but had a heart attack while playing ping pong with a teammate in April 1994.  It forced Hilgenberg’s retirement at 35 and prompted him to lose so much weight he became hard to recognize.  Jay Hilgenberg played in seven straight Pro Bowls and 188 career games.  Twice was named First Team All-Pro.  Currently, Hilgy owns and operates a golf course in Wisconsin and serves as a game analyst on the Bears Radio Network.  He has been nominated for the Pro Football Hall of Fame, an honor he richly deserves.

On this date in 1983, Jay Hilgenberg anchored a Chicago Bears offensive line that dominated the Philadelphia Eagles, 17-14, at Soldier Field in Chicago.  Led by the great Walter Payton, who rushed 23 times for 131 yards, the Bears amassed 223 yards on the ground and 335 overall.  Behind Hilgenberg, who won the starting center position only weeks earlier, Chicago controlled the clock and earned their fourth victory of the season.