Wayne Gretzky – The Best Players in NHL History – The Greatest Ones 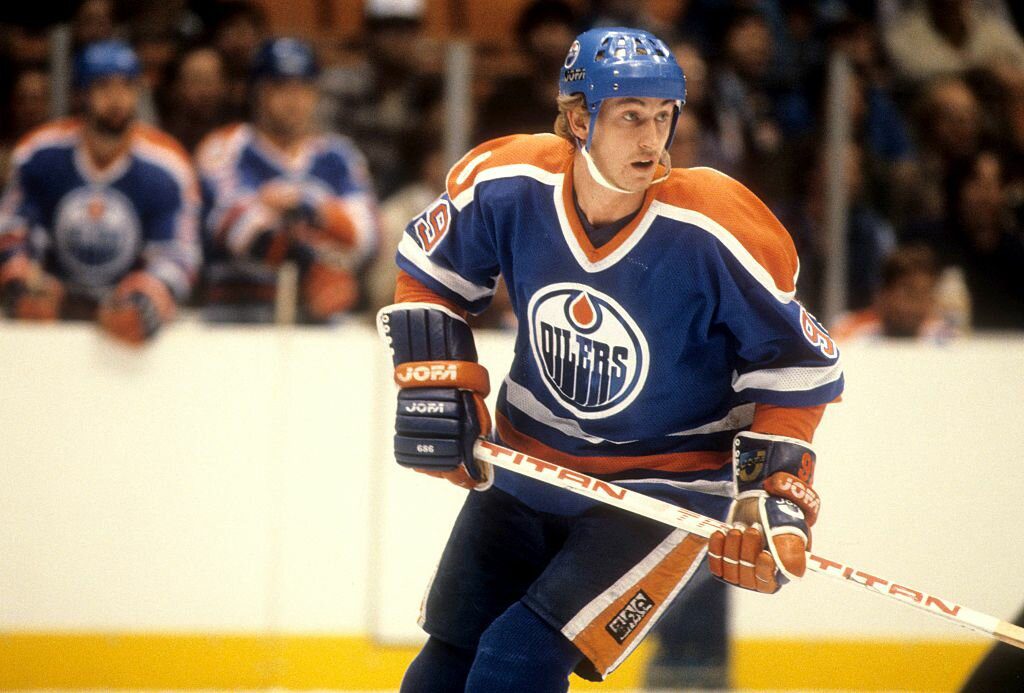 The 2018 Stanley Cup Playoffs get underway this evening, so we think it’s a good time to review the career of Wayne Gretzky – the greatest player in NHL history.

The Great One rewrote the record books during his 20-year career, retiring in 1999 with 61 NHL records.  Here are ten that are mind-boggling.  We call these achievements The Greatest Ones. 50 goals in 39 games.  Once thought impossible, Maurice “Rocket” Richard became the first player in NHL history to score 50 goals in the first 50 games of a season, which he accomplished in 1945.  Four other players in league history have accomplished the feat, including Gretzky, who did it three times.  In 1981-82, The Great One scored five against the Flyers in the 39th game of the season to reach the mark the fastest.  It took “Super Mario” Lemieux 46 games to score 50 goals, in 1989.  Of all his records, Gretzky considers this one the hardest to break. Probably the most coveted milestone in hockey is 1,000 career points, a certain measure of a successful, hall of fame-bound career.  It usually takes great players 1,000 games to collect 1,000 points.  Gretzky got to 1,000 points in only 424 games.  Lemieux is next fastest, reaching the 1,000-point plateau in 513 games. The Hart Trophy is awarded annually to the player deemed most valuable to his team.  The Great One won nine Hart Trophies, all within his first ten years in the NHL.  The only active player to have been selected more than once is Alex Ovechkin, who has won the Hart Trophy three times. A hockey player earns a point for a goal or an assist.  Wayne Gretzky collected 2,857 career points.  No other player in history has even 2,000.  If you took away all of The Great One’s 894 goals, he would still be the league’s all-time leading scorer [on assists alone]!  Former teammate Mark Messier has the second-most points on the list [1,887] and played in 269 more games.  In 2016-17, Connor McDavid led the NHL in scoring, with 100 points.  In order to break Gretzky’s career points record, a player would have to average 143 points a season for 20 years. Lemieux is the second-greatest scorer in NHL history.  In his three best seasons, Super Mario collected point totals of 168, 161, and 160, the most – by far – of any player not named Gretzky.  The past five league scoring leaders have averaged 110 points per year.  Nobody scores 200 points in a season — except The Great One, who did it in three straight seasons between 1983 and 1986. In today’s NHL, players who put together a 100-point season are superstars worthy of MVP consideration.  In 2015, Dallas Stars left-winger Jamie Benn led the league with 87 points.  Between 1980 and 1992, Gretz recorded 13 consecutive 110-point seasons. Hockey’s equivalent of Joe DiMaggio’s 56-game hitting streak – one of baseball’s most cherished records – is the consecutive-game point scoring streak.  From October 5, 1983, to January 28, 1984, Gretzky scored a point [goal or assist] in 51 straight games.  Six years later, Lemieux collected points in 46 consecutive games for the Penguins.  No one else has ever gotten beyond 30.