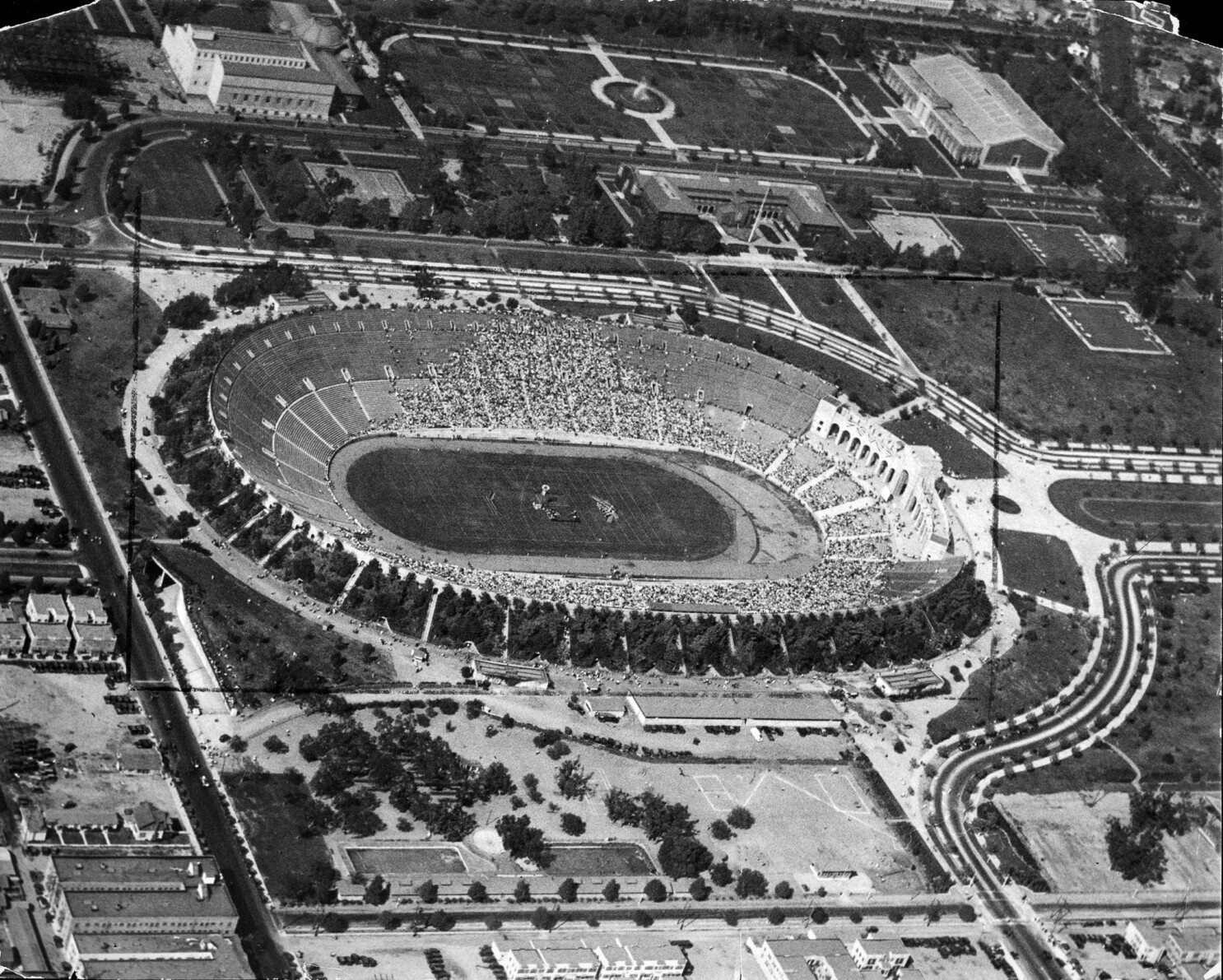 The Los Angeles Memorial Coliseum opened its doors to the Southland in June 1923.

One of the world’s greatest sports venues, the stadium has played host to world-class athletes and legendary games.  The Coliseum is the only facility in the world to hold two Olympiads [X and XXIII], two Super Bowls [I and VII] and a World Series [1959].  The venerable stadium is the football home of the USC Trojans, and Los Angeles Rams of the NFL.  The UCLA Bruins played there for nearly six decades before moving to the Rose Bowl in 1982.

The Coliseum was the home of the AAFC’s Los Angeles Dons for four seasons, and the Los Angeles Raiders played there from 1982 to 1994.  It was the home of the Chargers for their inaugural 1960 AFL season and hosted L.A.-based teams in countless other professional football and soccer leagues.  The Rams played in the Coliseum from 1946 to 1979 before bolting to Orange County and then St. Louis.  When the Rams returned to L.A. in 2016, they again made the Coliseum home.

The iconic venue helped influence the migration of professional sports teams to the West Coast.  In 1958, the Dodgers left Brooklyn for Los Angeles.  Prior to the opening of Dodger Stadium in 1962, the Dodgers called the Coliseum their home for three seasons.

One of the most storied venues in all of sports, the Coliseum has drawn several of the biggest crowds in history.  In 1947, an NCAA-record 104,953 patrons saw Notre Dame beat USC en route to the national championship.  Game 5 of the 1959 World Series between the Dodgers and Chicago White Sox drew 92,706, a World Series attendance record that will likely never be broken.  On March 28, 2008, the Coliseum hosted the largest crowd ever to attend a baseball game, when 115,300 turned out to see the Dodgers play the Boston Red Sox in a spring training exhibition.

More than just a sports venue, the Coliseum has hosted several historic events.  In July 1960, Democratic presidential nominee, John F. Kennedy, delivered his “New Frontier” acceptance speech from a stage set up on the Bermuda grass playing field.  Reverend Billy Graham appeared before 134,254 followers in 1963, the largest crowd ever assembled in the Coliseum.  Pope John Paul II celebrated Mass with more than 100,000 faithful in 1987.  Three years later, Nelson Mandela – just four months after being freed from having spent the previous 27 years in a South African prison, addressed a crowd of 70,000 at the Coliseum.

The Los Angeles Memorial Coliseum has been visited by three U.S. presidents.  In addition to JFK, the iconic stadium hosted Richard Nixon and Ronald Reagan.  The first Super Bowl – then called the NFL-AFL Championship Game – was played at the Coliseum.  In January 1973, the iconic venue was where the Miami Dolphins capped their perfect season with a 14-7 win over the Washington Redskins.

In February 1973, daredevil Evel Knievel jumped 50 cars stacked in 18 rows on the floor of the Coliseum.  Wattstax – a music festival dubbed “The Black Woodstock” – drew 112,000 to see Isaac Hayes, the Staple Singers, Rufus and a comedy routine from a young Richard Pryor in the summer of 1972.  In September 1984, Bruce Springsteen and the E Street Band concluded their Born in the USA Tour with a four-night stand at the Coliseum.  The venerable stadium hosted the Rolling Stones and Guns ‘N Roses in 1989, where for four straight nights, Mick Jagger and Axl Rose took part in a generational battle of the bands, an event the Los Angeles Times called “a classic rock ‘n roll showdown.”

Commissioned in 1921 as a memorial to Los Angeles veterans of World War I [and rededicated to all veterans in 1968], the Coliseum was built for just over $ 950,000 by legendary architect John Parkinson and his son, Donald.  The L.A.-based team also designed City Hall, the Los Angeles Athletic Club and Union Station, among others.  Groundbreaking took place December 21, 1921, and work was completed May 1, 1923.  Upon opening in June 1923, it was the largest stadium in Los Angeles, with a capacity of 75,144.

Located four miles southwest of downtown, the colossal bowl is situated in a semi-tropical setting at Exposition Park, across the street from the campus of USC.  Dubbed The Greatest Stadium in the World, the Memorial Coliseum is jointly owned by the State of California, Los Angeles County, and the City of Los Angeles.  It is operated by the University of Southern California.  Easily accessible from the Harbor Freeway, and is serviced by two light rail lines.

Declared a Federal Historical Landmark the day before the opening ceremony of the 1984 Summer Olympics, the Memorial Coliseum is undergoing a $ 270 million renovation for the 2019 football season.  Funded entirely by USC, plans include replacing every seat in the stadium, adding aisles, widening seats, and increasing leg room.  New suites, loge boxes will be added, as will a new concourse and press box.  The project will also include the installation of new lighting, concession stands, updating Wi-Fi technology throughout the venue, and restoring the iconic peristyle plaza entrance to the stadium’s original design.

Several improvements were made to the Coliseum prior to hosting its second Summer Olympics, in 1984.  In preparation for serving as the athletics venue and site of the opening and closing ceremonies, a new track and playing field was installed.  A pair of life-sized bronze nude statues of male and female athletes were erected as part of the Olympic Gateway, and a decorative façade bearing the Olympic rings was constructed in front of the peristyle.

In July 2017, the International Olympic Committee announced that the Summer Games would be returning to America’s second-largest city for a record third time.  The Los Angeles Memorial Coliseum will be the primary site of the XXXIV Olympiad in 2028.

On this date in 1967, the Coliseum played host to the first Super Bowl, where nearly 62,000 watched the Green Bay Packers down the Kansas City Chiefs, 35-10.