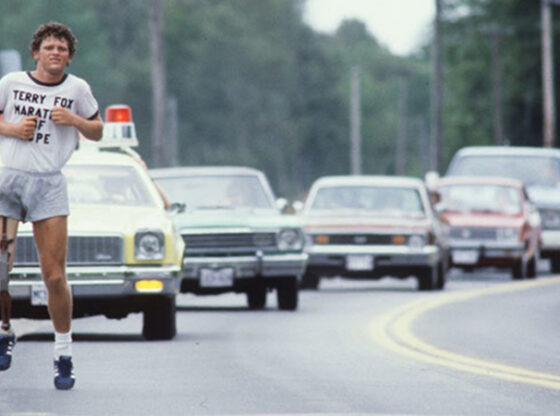 Terry Fox was one of the most determined athletes to ever live.

Terrance Stanley Fox was the second of Roland and Betty’s four children.  Born in Winnipeg, Canada, July 28, 1958, he moved with his family to Surrey, British Columbia, to escape the harsh Manitoba winters before settling in Port Coquitlam—30 minutes north of Vancouver–in 1968.  More determined than gifted, Fox played soccer, rugby and baseball as a child.  His passion was basketball, where he was the last player to make his grade eight team at Mary Hill Junior High.  Fox worked to improve his game, becoming a varsity starter at Port Coquitlam High School in grade ten.  As a senior, he was voted the school’s Athlete of the Year.  Following graduation from PCHS, Fox enrolled at Simon Fraser University in Vancouver, where he earned a spot on the junior varsity basketball team while studying to become a P.E. teacher.  He was also an avid runner.  After suffering with knee pain for several months, Fox was diagnosed in March 1977 with osteosarcoma, an aggressive bone cancer most prevalent in young adults.  Doctors informed him that his leg needed to be amputated, he would require chemotherapy, and he had a 50 percent chance of survival.  Fox learned that two years earlier his chances of survival would have been only 15 percent, impressing upon him the value of cancer research.

Terry Fox was 18 when he had his right leg amputated six inches above the knee. The night before his surgery, Fox’s high school basketball coach gave him a magazine article about Dick Traum, who the previous year became the first person to finish the New York City Marathon on a prosthetic leg.  Inspired by Traum’s example, Fox said, “Someday I am going to do something like that.”  Three weeks later, he was walking with the help of an artificial leg.  Shortly thereafter, he was playing golf.  In summer 1977, Fox joined the Vancouver Cable Cars wheelchair basketball team, winning the national wheelchair basketball championships.  He trained vigorously, climbing Vancouver’s 1,214 foot Burnaby Mountain in his chair, and was later named to the Northern Wheelchair Basketball Association All-Star team.  While undergoing chemotherapy, Fox became aware of how little money was dedicated to cancer research. Inspired by Traum, he decided to run the 5,300 mile length of Canada to raise awareness and funds for cancer research.  Fox initially hoped to raise one million dollars, then ten million, and later sought to raise one dollar for each of Canada’s 24 million people.

In February 1979, Mr. Fox embarked upon a 14-month training program, covering over 3,100 miles in preparation for his run.  He sent a letter to the Canadian Cancer Society [CCS] announcing his goal and appealing for funding, promising to complete his run, even if he had to “crawl every last mile.”  Fox solicited corporations to provide a van, running shoes, a running leg, and to cover the costs of the run.  The “Marathon of Hope” began with little fanfare April 12, 1980, when Fox dipped his artificial leg in the Atlantic Ocean in Newfoundland and filled two bottles with ocean water.  He intended to keep one as a souvenir and pour the other into the Pacific upon completing his journey in British Columbia.  Moving with a stride that consisted of two hops on his whole leg and one on his prosthesis, he ran at an eleven-minute-per-mile pace.  Fox started running most mornings at five.  He would run two miles, take a brief water break, run another two miles, and continue until he had covered 14 to 16 miles, usually by 8 a.m.  After resting in the van for three hours, Fox would run another ten to 12 miles, regardless of heat, cold or headwinds.  In the evenings, he gave interviews and addressed audiences in community halls and school gyms.  As he spoke, a CCS representative would move about the crowd, collecting bills and change in plastic trash bags and wrinkled grocery sacks.  Every cent went toward fighting cancer.

Fox, who was met with gale force winds, downpours and a snowstorm in the first days of his run, bristled at his critics.  “Some people can’t figure out what I’m doing.  It’s not a walk-hop.  It’s not a trot.  It’s running, or as close as I can get to running, and it’s harder than doing it on two legs.  It makes me mad when people call this a walk.  If I was walking, it wouldn’t be anything.”  By the time he arrived in Montreal on June 22, one-third of the way through his journey, the run had generated over $ 200,000 in donations.  Fox was a national star by the time he reached Ontario.   A crowd of 10,000 people greeted him in Toronto on July 11.  The Cancer Society estimated they collected $ 100,000 in donations that day alone.  Fox was greeted in southern Ontario by his hero, Bobby Orr [Daily Dose, 8/26/15], who presented him with a check for $ 25,000.

The physical demands of running a marathon every day began to take its toll on Fox’s body.  He suffered shin splints, an inflamed knee, dizzy spells and developed painful cysts on his stump.  Despite an enormous capacity for recovery, by late August Fox was exhausted before he began his day’s run.  As all of Canada rallied behind him, Fox needed painkillers to treat tendonitis in his ankle.  He experienced shortness of breath, pains in his chest and intense coughing fits.  After nearly five months of running, Fox stopped outside Thunder Bay, Ontario, to seek treatment at a local hospital.  In one of the most inspirational displays of perseverance, compassion for others and the true capacity of the human spirit, Mr. Fox had raised $ 1.7 million and covered 3,339 miles while only taking three days off during his 143-day trek along the Trans-Canada Highway.

On this date in 1980, Terry Fox was forced to abandon his Marathon of Hope run across Canada.  The next day, a tearful Fox held a press conference to announce that his cancer had returned and spread to his lungs.  Terrance Stanley Fox died June 28, 1981, one month shy of his 23rd birthday.  His Marathon of Hope raised $23 million, meeting his goal of one dollar for every Canadian citizen.  Each year, on a Sunday in September, Terry Fox Runs [non-competitive 5 and 10Ks] are held across the world. It is the world’s largest one-day fundraiser for cancer research.  To date, over $ 700 million has been raised in his name.  Terry Fox received the Companion of the Order of Canada, the youngest recipient of the award.  He was commemorated in his home country with a Terry Fox stamp and coin, is a member of the Canadian Sports Hall of Fame.  In a survey conducted in 1999, he was voted Canada’s greatest hero.