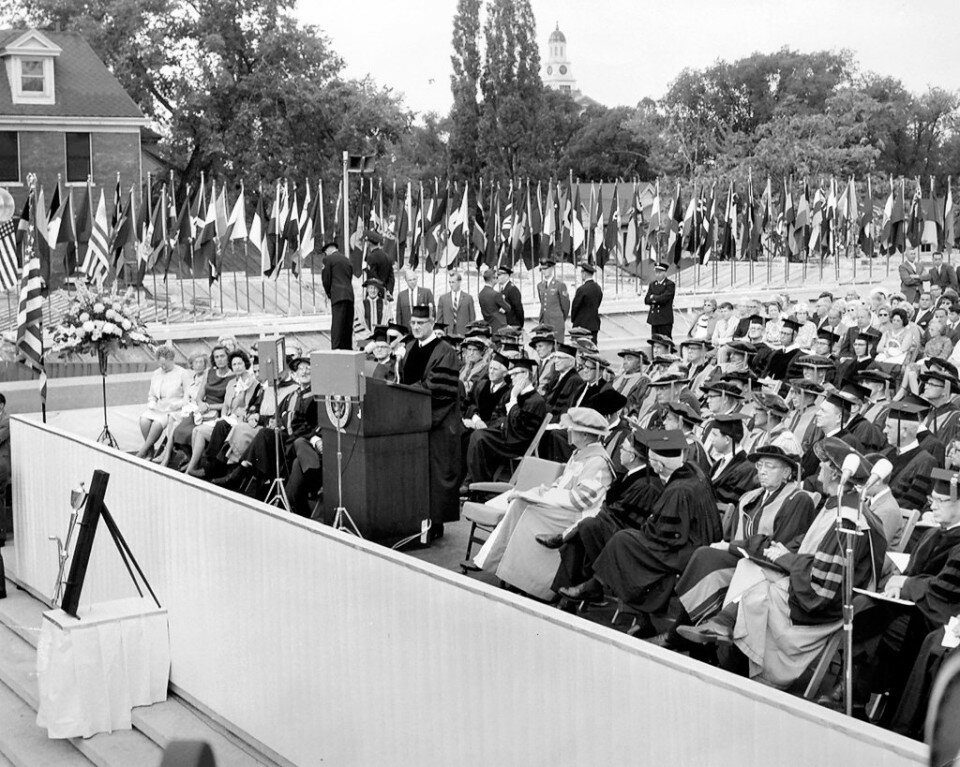 Syracuse University has the top journalism school in the country. The School of Journalism was founded at Syracuse in 1934.  Thirty years later, publishing magnate Samuel Irving Newhouse Sr. provided a $ 15 million funding gift to build a communications complex and the S.I. Newhouse School of Public Communications was opened.  President Lyndon Johnson officially dedicated the School 54 years ago today, an event at which LBJ delivered the Gulf of Tonkin speech that launched the Vietnam War. Admission standards to Newhouse are rigorous.  The school receives approximately 4,700 applications for a first-year class of 400.  The average incoming student has a 3.8 GPA and an SAT score in the 1300s. The first university in the nation to offer a college radio course, SU launched one of the first radio stations – WAER – in 1947.  On-campus communications opportunities abound for Newhouse students.  On-campus publications include The Daily Orange campus newspaper, an online news site, and numerous magazines.  The school has three radio stations on campus and is also the home of CitrusTV, the largest student-run campus TV station in the country. Syracuse is especially proficient in producing sportscasters.  Several of the most legendary announcers in sports history have come from SU. Marty Glickman [’39] was the most influential sports announcer of his time.  A gifted Jewish-American athlete who was denied the chance to represent the U.S. at the 1936 Berlin Olympics, he went on to become a broadcasting legend.  The Bronx native – dubbed the Flatbush Flash – was a football and track star at SU.  He got his start hosting a nighttime radio show in New York City, and was in the right place at the right time.  New York City was a basketball mecca, and Glickman became the voice of the NBA Knicks and, later, ABA Nets.  The voice of the New York football Giants during their golden years of the 1950s and 1960s, Glickman joined the Jets in 1972.  He helped launch HBO and covered the New York Rangers, Yankees and Brooklyn Dodgers.  There was seemingly nothing the talented Glickman could not call.  In addition to covering roller derby and rodeo, the venerable Glickman once called a marbles tournament. Marv Albert [’63] spent three years at the Newhouse School – where he was the voice of the Triple-A Syracuse Chiefs — before graduating from NYU in 1965.  He caught his first break when Marty Glickman, who served as Albert’s mentor, gave him several Knicks games on radio.  For 37 years, Albert covered the Knicks on radio and television.  Considered the voice of basketball, he has called the NBA since 1990.  The long-time voice of the New York Rangers has also covered college basketball, MLB, boxing, tennis, horse racing and the NFL.  The immensely popular Albert made 126 guest appearances on David Letterman’s talk shows, spawning the Albert Achievement Awards for sports bloopers. Two Syracuse grads who have been fixtures on the American sportscasting landscape for several decades are Dick Stockton [’64] and Bob Costas [’74].  As undergrads, both worked at WAER.  Stockton later moved to Boston, where he covered the Celtics and Red Sox.  He famously called Carlton Fisk’s home run in the 1975 World Series and helped save the NBA while serving as CBS’s lead play-by-play man during the 1980s.  A 2001 Naismith Basketball Hall of Famer, Mr. Stockton has been named as one of the top 50 network broadcasters of all time.  Costas served as the voice of the Syracuse Blazers minor league hockey team while completing his communications degree at Newhouse.  At 22, he called games for the ABA Spirits of St. Louis before landing with NBC in 1980.  Raised on Long Island, Costas is perhaps the most recognizable face in sports television and has anchored coverage of the Olympics, NFL, MLB, and horse racing, among others.  Visit The Daily Dose archives [dailydsports.com] to read more about these two SU legends. Mike Tirico [’88] started at WAER while at Syracuse.  Bob Costas was his first guest.  After working as sports director at CBS affiliate WTVH-TV while an SU undergrad, Tirico moved to ESPN.  Tirico, who grew up in Queens,  hosted the first-ever ESPNews show in 1996 and covered golf, tennis, World Cup soccer and the NBA for the network.  Although Tirico served as a SportsCenter anchor at ESPN, he is best known for his decade-long run calling play-by-play for Monday Night Football.  In 2016, Tirico signed with NBC after 25 years at ESPN.  He serves as play-by-play man for Notre Dame football and has replaced Costas as NBC’s studio host of the Olympics and the NFL. Sean McDonough [‘84] is one of the best in the business.  In 1992, at 30, he became the youngest ever to announce a World Series nationally.  He later succeeded Mike Tirico calling Monday Night Football.  Todd Kalas [’88] is the television face of the Houston Astros.  The versatile Dave Pasch [’94] spent three seasons as the football and basketball voice of Syracuse University before joining the Arizona Cardinals in 2002.  Pasch has also called the Rose Bowl and Little League World Series. Adam Zucker [‘98] worked in radio and television in Syracuse before moving to CBS.  He calls football, basketball, baseball and lacrosse for the CBS Sports Network and serves as a studio host.  Liam McHugh is SU’s rising star.  After earning a master’s degree from Newhouse in 2004, the McHugh became lead studio host of the NHL on NBC and the NBC Sports Network.  He has since advanced to covering the NFL, Tour de France and Notre Dame football for the network. No journalism school in America has produced more talent than Syracuse University.  In addition to educating many of the best sportscasters in history, the S.I. Newhouse School of Public Communications counts Ted Koppel, Jerry Stiller and Dick Clark among its alums.  Newhouse grads populate the staffs of every major newspaper, online publication and magazine in the country.  The footprint even extends to music.  In the early 1960s, the late Lou Reed hosted a free-format radio show at WAER during his time at Syracuse. Since 2013, the Newhouse School has presented annually the Marty Glickman Award for Leadership in Sports Media.  Bob Costas was the inaugural recipient.  Other winners include Marv Albert, Beth Mowins, Sean McDonough and Mike Tirico.