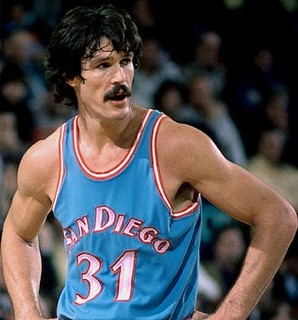 Swen Nater went from being a college bench-warmer to a first-round pick in the NBA draft.

Born January 14, 1950, in Den Helder, Netherlands, Swen Erick Nater was the middle of three children.  His parents divorced when he was three, and his mother remarried.  When the family’s economic situation deteriorated, Swen and his older sister were dumped at the door of the local orphanage.  He was six.  Of the 60 other children at the orphanage, Swen and his sister were the only children whose parents were still living.

Nater’s mother, stepfather and younger brother fled Holland for the United States, settling in southern California.  Swen and his sister were reunited with their parents on the Hollywood set of It Could Be You [later This Is Your Life].  Now nine and in the fourth grade in a new country, Swen had never seen a basketball – and spoke no English.  At Wilson High School in Long Beach, the 6’4” Nater tried out for the basketball team and was cut.  The coach said he’d never seen anyone work that hard and move that slow.  He didn’t try out as a senior.

The Dutchman grew to 6’9” and enrolled at tiny Cypress College in Orange County.  Gangly and slow, Nater was so weak he couldn’t even do a push up.  Tom Lubin, a Cypress chemistry professor who had played for John Wooden at UCLA in the 1950s, convinced him to come out for the basketball team.  Nater did not see the court as a freshman but continued to work on his game, taking 600 to 800 practice shots daily under the watchful eye of Lubin.  By the time he was a sophomore, Nater was the best player in his conference, hauled in a California-record 39 rebounds in one game and was named Community College All-American.

Wooden offered him a scholarship to UCLA, which had won six national championships.  The 6’11” center redshirted his first season in Westwood, then played behind Bill Walton, averaging two minutes a game.  Nater considered practicing against Walton – who considers Nater the best college center he ever faced – a daily investment in his basketball future.  “My goal was not college, it was the pros,” said Nater after he retired.  “If my goal was college basketball, I would have gone to another college.  I know I would be a much better pro if I played behind Walton.  Everybody has talents, and one of mine is accomplishing goals.”

In two years in Westwood, Nater appeared in 58 contests.  The Bruins won two national titles and never lost a game.

Following impressive performances at the Olympic Trials and the Pizza Hut College All-Star Game [where he scored 34 points with 25 rebounds], the Milwaukee Bucks took Nater with the 16th overall pick in the 1973 NBA draft.  He became the only player never to have started a college game yet go in the first round of the NBA draft.  Tired of playing second fiddle, Nater shunned the Bucks’ offer to back up Kareem Abdul-Jabbar and joined the ABA Virginia Squires.  One month into the 1973 season, he was traded to the San Antonio Spurs.

After leading the league in field goal percentage, Nater made the All-Star team and was named 1974 Rookie of the Year.  The following season, he led the league in rebounding and earned a second straight all-star nod.

Nater landed with the Bucks after the 1976 ABA-NBA merger.  In his first NBA season, he set a league record with 18 defensive rebounds in one half.  He finished the game with 33 boards while scoring 30, making Nater just the sixth player to join the NBA’s exclusive 30-30 Club.  He was traded to the Buffalo Braves, who became the San Diego Clippers in 1978.  Nater, who was a fan favorite in San Diego, set a team record for double-doubles in a season.  He led the NBA in rebounding in 1979-80, making him the only player ever to lead both the ABA and NBA in rebounding.

In 1983, Nater was traded to the Los Angeles Lakers, where he backed up former UCLA legend, Abdul-Jabbar.  Despite helping the Lakers to the 1984 NBA Finals, the team did not renew his contract.  Nader spent his 12th and final professional season in the Italian League, where he was the highest-paid player.  The 240-pound pivotman led the Italian League in rebounds, becoming the only man to lead three professional leagues in rebounding.

After retiring as a player, Nater built the basketball program at San Diego Christian College.  As head coach, he led the Hawks to an NCCAA national title.  Nater also served as athletic director, trainer and taught algebra as well as PE.  The producer of six basketball instructional videos, Mr. Nater has also authored a half-dozen books.  After leaving UCLA, he wrote poems and sent them to Coach Wooden, who kept them in a three-ring binder.  Wooden encouraged Swen to publish them, resulting in A Reason for the Rhyme, a collection of life lessons Swen Nater learned from his coach.

Now a manager for Costco Wholesale in Washington, Nader – who was the first in his family to earn a college degree — devotes his time to public speaking, songwriting and being a grandfather.  The best backup center in UCLA history ranks eighth on the NBA’s all-time list of rebounds-per-minutes-played.