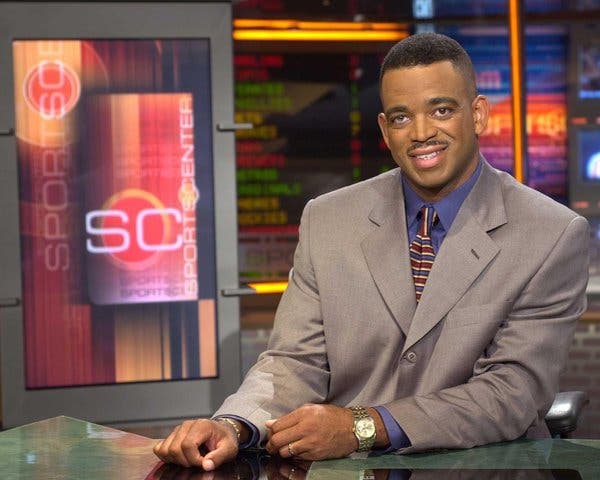 Like his signature catchphrase, Scott was “cooler than the other side of the pillow.” He revolutionized sports broadcasting. In 22 years at ESPN, he inspired colleagues with his sheer talent, work ethic and devotion to his two daughters. Scott blended hip-hop culture and sports in a way that had never been seen before. His fresh, energetic style appealed to young viewers — especially young African-Americans. Cocky and brash, he talked about sports the same way that fans, watching from their living room, did. “Yes, he brought hip-hop into the conversation, but I would go further than that,” said SportsCenter anchor Jay Harris. “He brought in the barber shop, the church, R & B, soul music. Soul, period.”

Prior to Scott, SportsCenter was hosted by white guys. Scott brought a different energy, enthusiasm and dynamic to sports broadcasting, often becoming the show. Cool and hip, he introduced the audience to new catchphrases, following in the footsteps of his predecessors, Dan Patrick and Keith Olbermann. He popularized Boo-Yah! and added Hollah! to the lexicon. He must be the busdriver cuz he was takin’ him to school was mixed with Just call him butter ’cause he’s on a roll. “He didn’t just push the envelope,” recalled Patrick, a sports radio host and former ESPN anchor. “He bulldozed the envelope.” Scott may have been at his best when channeling a Baptist minister preaching from the pulpit. And the Lord said you to to rise Up! and Can I get a witness from the Congregation?

Born in Chicago on this date in 1965, Stuart Orlando was the second of O. Ray and Jacqueline Scott’s four children. His postal inspector father moved the family to Winston-Salem, North Carolina, when Stuart was seven. He attended Mount Tabor High School for two years before transferring to Reynolds High, where he played football, ran track, served as Student Council Vice President and was a member of the Key Club.

Following high school graduation in 1983, Scott attended the University of North Carolina, where he played club football and worked at the student radio station, WXYC. He earned a speech communications degree in 1987 and was hired as a news reporter and weekend sports anchor by WPDE-TV in Florence, South Carolina. He held television jobs in Raleigh and Orlando before being discovered in 1993 by Al Jaffe, vice president for talent at ESPN, who was looking for sportscasters who might appeal to a younger audience for the network’s newest product, ESPN2. Scott’s first assignments were for twice-hourly SportsSmash segments. He later replaced Keith Olberman on ESPN2’s SportsNight when Olbermann was promoted to the “Big Show.”

Scott migrated to ESPN’s flagship, SportsCenter, making his debut alongside Craig Kilborn. He teamed with Steve Levy, Dan Patrick and Kenny Mayne. Scott’s most memorable work came while partnered with Rich Eisen, whose shows became fodder for the next day’s water cooler conversation. He hosted Monday Night Countdown and was named studio host for NBA on ESPN. By 2008, Scott was a staple in ESPN’s programming. He interviewed Bill Clinton and Barrack Obama and, in 2004, spent a week with U.S. soldiers in Kuwait hosting SportsCenter: Salute the Troops.

In November 2007, Scott left his home in Connecticut for a Monday Night Football game in Pittsburgh. Instead of the game, a worsening stomachache forced him to the hospital, where he had his appendix removed. Doctors learned he had appendiceal cancer [a rare form of the disease], and Scott underwent surgery to remove some lymph nodes and part of his colon two days later. By December, Scott – while undergoing chemotherapy – returned to work. The cancer returned in 2011 but eventually went into remission. He was again diagnosed with cancer in January 2013. By 2014, Scott had undergone multiple surgeries, radiation and nearly 60 chemotherapy infusions. He continued to exercise throughout his battle with the insidious disease, doing mixed martial arts and P90X workouts with what little strength he had left immediately following chemo treatments.

At the ESPY Awards July 16, 2014, Scott accepted the Jimmy V Award for Perseverance. He shared with the audience that he had four surgeries in seven days the week prior to his appearance. A video tribute was shown that included scenes from Scott’s cancer fight. Scott told the audience, “When you die, it does not mean that you lose to cancer. You beat cancer by how you live, why you live, and in the manner in which you live.”

On a Sunday morning, less than six months after receiving the Jimmy V Award, Mr. Scott died at his home in Avon, Connecticut. He was 49.

In February 2015, Scott was inducted into the Richard J. Reynolds High School Hall of Fame during halftime of a Reynolds – Mount Vernon basketball game [the two schools Scott attended]. The University of North Carolina said in a statement “His legacy will live on in many ways – as a friend, a father, a professional and forever, a Tar Heel.” SportsCenter gave an on-air farewell to Scott and left a chair empty in his honor. During his acceptance speech for “Best Studio Host” at the 2015 Sports Emmy Award show, Ernie Johnson gave his award to Scott’s two daughters, saying “it belongs with Stuart Scott.”