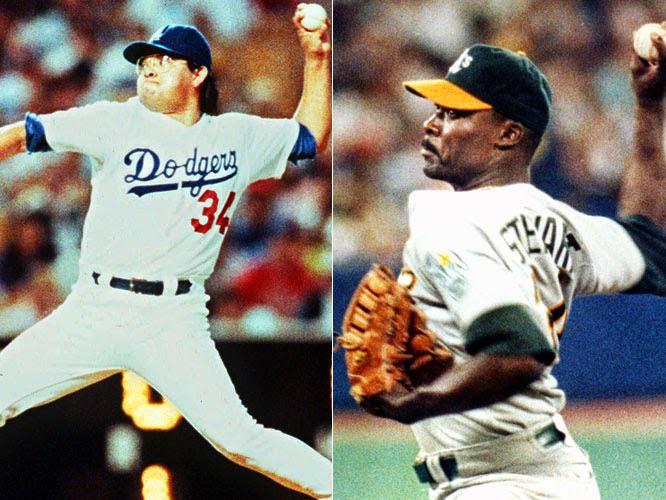 Major League Baseball defines a no hitter as “a game in which a pitcher, or pitchers, gives up no hits while pitching at least 9 innings. A pitcher may give up a run or runs so long as he pitches 9 innings or more and does not give up a hit.”

By that definition, this feat has been accomplished 280 times since the first “no-no” was thrown by Joe Josephs [later Borden] in 1875. But only once has it been done twice in one day, as it was on this date in 1990.

David Keith Stewart had lost 5 of his past 6 starts when he took the mound before 49,817 fans at Skydome in Toronto to face the Blue Jays. He walked the first two batters he faced before retiring the next 25 in a row to win, 5-0. He walked three Blue Jays batters that day; two in the first inning and one in the ninth and struck out 12. He threw 115 pitches that night—81 of them for strikes. Stewart played for 6 teams in his MLB career and had four straight 20 win seasons yet never won a Cy Young Award. He was twice named MVP of the ALCS, won three World Series championships and was MVP of the 1989 World Series. Born in Oakland, California, he was 168-129 over the course of his 18 year career with an ERA of 3.95 and 1,741 strikeouts. He was 33 years old when he pitched his gem. Mr. Stewart currently serves as GM for the Arizona Diamondbacks.

2,500 miles away, Fernando Valenzuela Anguamea was watching Stewart’s performance on television with his teammates in the Dodger Stadium clubhouse that day when, according to his manager, Tommy Lasorda, he said, “That’s great, now maybe we’ll see another no-hitter.” 30 minutes later, he and his Los Angeles Dodgers took the field to face the St. Louis Cardinals before 38,583 fans. He allowed no hits while three Cardinals reached base—on two walks and an error—while striking out seven in a 6-0 victory. Like Stewart, Valenzuela had lost 5 of his last 6 starts prior to the outing against the Cards. Valenzuela played for the Dodgers for 10 seasons and enjoyed his greatest success in 1981, the year of “Fernandomania”, when he became the first player to win the Rookie of the Year and Cy Young Awards in the same season. He led the National League in strikeouts that year and his team won the World Series. In 1986, Valenzuela went 21-11 and set a record by striking out 5 straight American League batters in that year’s All Star game. He went on to play for 5 more teams over the course of his 17 year career and finished 173-153 with an ERA of 3.54 and 2,074 strikeouts. Mr. Valenzuela currently serves as color commentator for the Dodgers Spanish language feed of SportsNet LA. He was 29 years old the night he tossed his “no-no”.

Dave Stewart and Fernando Valenzuela were Dodger teammates from 1981 to 1983. Both were in the Dodger dugout in Houston in 1981 when Nolan Ryan pitched his 5th career no-hitter against their team in a 5-0 win in the Astrodome.