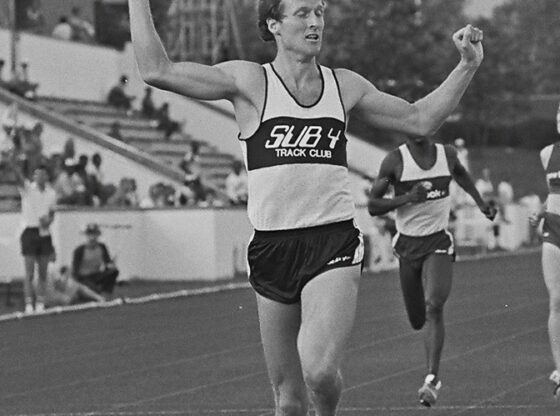 One of the greatest milers in American history also holds the world record for the fastest round of golf ever played.

Steve Scott was born in Upland, California, on Cinco de Mayo 1956.  His parents held opposing views on the value of physical fitness: his mother was a runner while his father, who was a heavyset, chain-smoking physician, saw no value in exercise.  Scott was raised in Upland, located about 40 miles east of Los Angeles in Riverside County’s Inland Empire.  He attended Upland High School–alma mater of hall of fame relief pitcher Rollie Fingers—and went out for the cross-country team.  Inspired by Dave Wottle, who won a gold medal in the 800 meters in the 1972 Munich Olympics, Scott wore a baseball cap in every race of his freshman season.  He made the varsity track team as a junior, running personal-best times of 1:58 for 800 meters while covering the mile in 4:30.  As a senior, he improved to 1:52 for 800 and 4:15 in the mile while finishing fourth in the 880 at the CIF California state championship meet.  Scott caught the eye of Len Miller, head track and field coach at UC-Irvine [Daily Dose, 9/8/16], and was offered a scholarship.

Scott arrived in Irvine in fall 1974.  A fierce competitor, he won three NCAA Division II championships in his college career; one in the mile and two at 1,500 meters.  Scott ran the mile in under four minutes for the first time at the Sunkist Invitational in Los Angeles in January 1977.  By the time he graduated UC-I with a degree in social ecology in May 1978, he had run 11 sub-four minute miles.  As a senior, Scott won the 1977 NCAA Division I title at 1,500 meters and, after competing on both sides of the Atlantic, went from a little-known collegiate runner to international miler.

A recreational golfer who regularly shot in the 80s, Scott invented the sport of Speed Golf.  In December 1982, he played the par-72 Miller Golf Course in Anaheim, California.  Using only a three iron while running from hole to hole, he drove it 170-180 yards while avoiding bunkers and water.  While playing from beneath a tree on 16, he broke his club on a tree root, forcing him to get a club from one of the two carts that were following him [although not permitted by the USGA, replacing a broken club during the round is allowed under Speed Golf rules].  Using a borrowed five-iron, Scott finished the round and shot a respectable 95 while covering the 6,500-yard layout in 29 minutes, 33 seconds to establish the record for the fastest round of golf ever played.  Over three decades later, his mark still stands.

Steve Scott is one of the great milers in American history.  He has run sub-four minutes on 136 occasions, more than any runner in history.  Scott set three American records in the mile, the fastest of which—3:47.69—held up for over a quarter century until Alan Webb broke it in 2007.  The Miler won the U.S. Men’s 1,500 meter title six times and men’s indoor crown on four occasions.  He raced indoors and out, in road races and in cross-country events.  A survivor of testicular cancer which had derailed his career, Scott is now the head track & field coach at Cal State-San Marcos, an NAIA school located in north San Diego County.  Scott led the Lady Cougars to three straight national titles from 2009 to 2011 and directed the men’s team to a second-place finish at the 2011 NAIA championships.  He still holds the UC-Irvine school record in the 1,500 meters and the Steve Scott Invitational—named in his honor—is held there every year.  In his career, Mr. Scott was ranked as America’s top miler ten times and was ranked in the top ten in the world 11 times.  He still holds the U.S. indoor record in the 2,000 meters and was inducted into the USA Track & Field Hall of Fame in 2002.