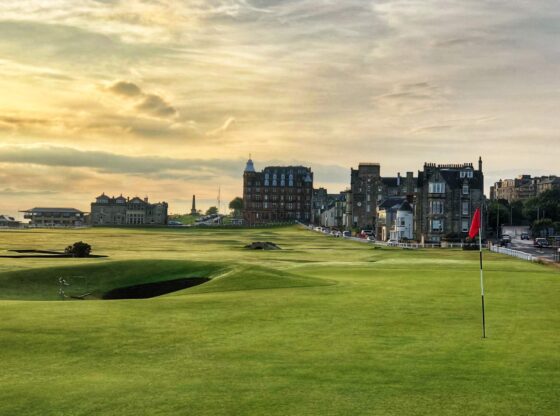 The Old Course at St. Andrews is one of the greatest and most important golf courses in the world.

Established in 1552, it is a public course over common land in St. Andrews, Fife, Scotland, and is situated along the Firth of Clyde, 30 miles northwest of Edinburgh, Scotland’s capital city.  Owned by the Fife Council, the Old Course is held in trust by the St. Andrews Links Trust under an act of Parliament.  The Royal & Ancient Golf Club of St. Andrews—the “Home of Golf”– is one of the oldest and most prestigious golf clubs in the world and sits adjacent to the first tee.  The R & A is one of many clubs that have playing privileges on the course, along with the general public.

The game of golf was first played on the links at St. Andrews in the early 15th Century.  Golf was becoming increasingly popular in Scotland until 1497, when King James II banned the game because young men were playing too much of the sport instead of practicing archery.  The ban was upheld until 1502, when King James IV, a golfer himself, lifted the ban.  In 1754, two-dozen men formed the Society of St. Andrews Golfers, the precursor to the R & A, which is the governing body for golf everywhere outside the United States and Mexico.

The town of St. Andrews is located on the east coast of Fife.  The long, sandy beach that runs along the town’s edge served as the opening scene for the 1981 film, Chariots of Fire.  With fewer than 19,000 residents, the ancient village is home to St. Andrews University, the third-oldest university in the English- speaking world and alma mater of Prince William, Duke of Cambridge.  St. Andrews is the epicenter of golf.

Thomas Mitchell Morris—“Old Tom”—was born in St. Andrews in 1821 and began working at the Old Course under Allan Robertson at 14.  Robertson was the world’s first professional golfer and the game’s top player.  Morris worked at the Old Course from 1835 until 1851, when he was fired on the spot by Robertson for playing the new guttie golf ball.  Robertson had a profitable business making the featherie ball, which was threatened by the emergence of the guttie.  Morris was then hired by the Prestwick Golf Club, which had just opened.  Morris was influential in the creation of the first Open Championship in 1860, and the first dozen Opens were held at Prestwick.  Morris is a four-time winner of the Open Championship and is the event’s oldest winner [age 46].  His 13-stroke win over Willie Park in 1862 stood as the largest margin of victory in a major championship for 138 years, until Tiger Woods broke it in 2000 while winning the U.S. Open by 15 shots.

In 1865, the R & A formally passed a motion calling for Morris’ hiring.  The Old Course was in poor condition, and Old Tom corrected it by widening the fairways, enlarging the greens, applying turf management techniques he had learned at Prestwick, building new greens on holes 1 and 18, and managing the hazards.  Morris stayed at St. Andrews until he was 82.  He died five years later in 1908 after falling down a flight of stairs at the New Golf Club in St. Andrews, which opened in 1895.  Old Tom Morris is buried at St. Andrews Cathedral and his grave attracts thousands of visitors each year.

The Old Course is pivotal in how golf is played today.  In 1764, the course had 22 holes.  Members decided the first four and last four holes were too short and should be combined into four holes—two going out, two coming in—setting the standard for 18 holes.  The course’s current layout was set by Old Tom Morris around 1863.

The Open Championship is the oldest of golf’s four majors and the Old Course has hosted more Opens [29] than any other venue in the 145-year history of the event.  First played at St. Andrews in 1873, the Open was most recently played there in 2015, when Zach Johnson won in a playoff.  Several of the game’s greatest players have won Opens at St. Andrews, including Sam Snead [Daily Dose, 5/26/16] and Seve Ballesteros [Daily Dose, 9/18/15].  Peter Thomson won five Open Championships, including the 1955 event at St. Andrews and Jack Nicklaus–who won more majors than any player in history–captured the third and final Claret Jug of his hall-of-ame career at St. Andrews in 1978.

The great Bobby Jones [Daily Dose, 3/17/16] first played at St. Andrews in the 1921 Open Championship.  During the third round, he infamously hit his ball into a bunker on the 11th hole.  After taking four swings and not getting out, one of the greatest sportsman and gentlemen in golf history angrily stormed off the course.  Jones returned six years later to lead wire-to-wire while becoming the first amateur to win back-to-back Opens.  Jones would add a third and final Open title in 1930, the year he became the only player in history to capture golf’s “Grand Slam.”  Mr. Jones, who designed Augusta National and founded the Masters Tournament, later said, “If I had to select one course upon which to play the match of my life, I should have selected the Old Course.”  In 1958, the town of St. Andrews gave Jones a key to the city, making him the second American to receive the honor—after Ben Franklin in 1759.  “I could take out of my life everything but my experience here at St. Andrews,” said Jones, “and I would still have had a rich and full life.”

The Old Course is a par-72, 6,721 yard layout that can be played in a clockwise or counter-clockwise direction.  One of its unique features are its large double greens, seven of which are shared by two holes each.  The 700-year-old Swilcan Bridge spans Swilkan Burn between the first and 18th fairways and is an important icon in golf.  It has become customary for the legends of the sport to give their final farewell to professional golf while standing on the bridge, as the great Arnold Palmer [Daily Dose, 7/1/16] did while playing the last hole of his Open career in 1995.  St. Andrews has 112 individually-named bunkers: two of the most famous are the ten-foot deep “Hell Bunker” on 14 and the “Road Bunker” on 17—also known as the “Road Hole.”  One of the most famous golf holes in the world, the tee shot at the par-four Road Hole requires players to take aim over a corner lined with railway sheds to a fairway they cannot see.  Road Bunker guards the front of the green, while the back is bordered by a tarmac roadway and old stone wall, which are considered in play.

The course, which features greens and fairways that are a combination of Fescue and Bent grasses, is generally closed for play on Sundays to let the course rest.  It remains open to the public on Sundays as a park in which the townspeople often picnic.

In January 2016, Golf Digest ranked the Old Course at St. Andrews as the eighth-greatest golf course in the world.