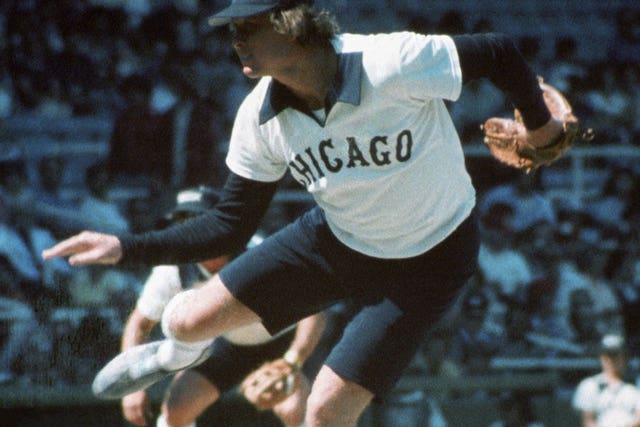 The White Sox have always been the Second City’s second-rate team.  For over a century, the Cubs—promoted by the Chicago Tribune, [who once owned the club], broadcast nationally on WGN-TV and playing in the friendly confines of Wrigley Field—have garnered most of Chicago’s baseball attention.  Bill Veeck sought to change that when he purchased the White Sox in 1976.  Veeck, a Chicago native whose father served as president of the Cubs from 1919 to 1933, came up with the idea of planting ivy on the walls of Wrigley Field [Daily Dose, 4/26/16] while working there as a popcorn vendor in 1937.  Nine years later, he become owner of the Cleveland Indians, were he developed a reputation for creative thinking and promotions.  He hired Max Patkin, the “Clown Prince of Baseball,” as a coach.  After buying the hapless St. Louis Browns in 1951, he signed Eddie Gaedel–who stood three feet, seven inches tall and is the shortest person to appear in a MLB game–as a pinch hitter instructed to draw walks.  In 1959, Veeck headed a group that purchased the White Sox, who went on to win their first pennant in 40 years.  Two seasons later and in poor health, Veeck sold the ChiSox to John Allyn.  Under Allyn, the Sox fell upon hard times, posting only one winning season between 1968 and 1975.  American League owners wanted the financially strapped Allyn to relocate the White Sox—who were one of the league’s eight charter franchises–to Seattle.  At the eleventh hour, Bill Veeck assembled a group of owners, took control of the team he owned from 1959 to 1961, and saved the Pale Hose from extinction.

Mr. Veeck decided changes were in order for his new club.  In the spring of 1976, he called a press conference at Miller’s Pub, his regular watering hole, and installed a runway, where he had four former players model a new set of uniform combinations the team would be wearing in the upcoming season.  The outfits were supposed to be a throwback to the uniforms of the early 20th  Century.  Collared, V-neck pullover shirts were to be worn untucked, with three pants options; clamdiggers, which came down to just above the ankle, knickerbockers, worn tucked into knee-high socks, and “Hollywood” shorts, which left the players knees completely exposed.  “We are adding elegance to baseball styles,” Veeck explained, “we may not be the greatest team in baseball, but we’ll immediately be the most stylish team in the game.”  Veeck, who had introduced an exploding scoreboard, centerfield shower, and Salute to Mexico—where players took the field wearing giant sombreros—was attempting to lure fans to Comiskey Park to see his lousy team.  “You will be awed.  Comiskey Park will replace Paris and New York as the fashion center of the world.”  His players were not so sure.  When asked about the shorts, second baseman Jack Brohamer volunteered that, “I’m not going to wear short pants unless they let me wear a halter top, too.”  Slugging first baseman Lamar Johnson quipped, “I got the nicest thighs you ever saw.  I can’t wait!”

The White Sox wore the long- pant options throughout the summer.  In June, baseball commissioner Bowie Kuhn banned one of their new additions—white caps, which were making it difficult for hitters to pick up the ball as it left the pitcher’s hand.  In August, 19 games out of first place and headed toward another last-place finish, the Kansas City Royals visited Comiskey Park—which can be sweltering in late summer–for a Sunday doubleheader.  Veeck explained, “These uniforms are more practical and utilitarian.  A guy who hasn’t sweated as much may have that extra step that helps us win a game.  A pitcher in a pullover may have more freedom to throw than with the usual tucked-in shirt.”  Looking to boost attendance, Veeck ordered his Sox to wear shorts for game one of the twin-bill.  In keeping with the theme, Veeck arranged for Chicago-area softball players to compete in a home run derby between games of the doubleheader.  “They said our jerseys looked like softball jerseys,” quipped Sox pitcher Rich “Goose” Gossage, “but I know there were a lot better-looking softball uniforms than what we wore.”  Upon seeing the Sox in shorts, Royals slugger John Mayberry observed, “You guys are the sweetest team we have seen yet.” Chicago starting pitcher Terry Forster—who David Letterman called “a fat tub of goo” after his weight ballooned to 270 later in his career—gave up no runs over six innings.  Gossage, who was voted 1975 “Fireman of the Year” as the best relief pitcher in the AL, got the save as the White Sox won, 5-2.  Wearing special protective sliding pads under their knee socks, Chicago stole five bases.  Despite Veeck’s best efforts, less than 16,000 fans showed up for the doubleheader which, ironically, was played on one of the coolest days of the summer.  What’s worse, the players refused to wear shorts for the second game, which the South Siders lost, 7-1.

During a home game on August 21, the White Sox wore shorts for the second time, beating the Baltimore Orioles [Daily Dose, 7/11/16 ] 11-10, in extra innings.  The game drew 32,607 patrons—the third biggest crowd of the season for the ChiSox.  Jack Brohamer—while not wearing a halter top—homered, becoming the first player in major league history to hit a home run while wearing shorts.  Chicago wore them again the next day, lost 6-2, and never wore them again.  Goose Gossage, who wore the late 70s bumblebee jerseys in Pittsburgh and the taco brown Padre tops in the 80s, has worn many of baseball’s ugliest uniforms.  “They were brutal,” groused Goose, “’they were ugly.  And we played exactly how we looked.”  Gossage was elected to the Baseball Hall of Fame in 2008; he is the only enshrine that played in shorts.

On this date in 1976, the Chicago White Sox became the only team in major league baseball history to play in shorts.