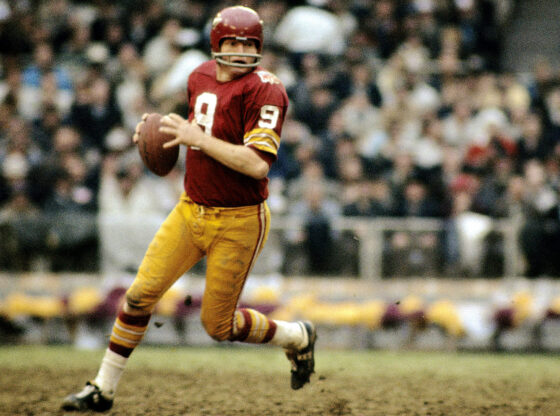 In tackle football, a “gunslinger” is a strong-armed quarterback who plays in an aggressive and decisive manner by throwing deep and with risk.  Sonny Jurgensen—who could throw a football 80 yards and hit his target—was a gunslinger.

Christian Adolph Jurgensen III was born in Wilmington, North Carolina, on this date in 1934.  Always a great athlete, he led his grammar school team to titles in basketball and baseball, captured the boy’s tennis championship of Wilmington and pitched his team to the city baseball crown.  Jurgensen attended New Hanover High School–alma mater of 1969 NFL MVP Roman Gabriel and legendary newscaster David Brinkley—where as a senior he led the Wildcats to the state title game in basketball and was named his home state’s starting quarterback in the North Carolina-South Carolina Shrine Bowl High School All-Star Game.  Jurgensen played football and baseball at Duke University but turned down an invitation to try out for the basketball team.  The three-year letterman led the Blue Devils to two ACC championships, a 34-7 win over Nebraska in the 1955 Orange Bowl and, as a defensive player, intercepted a pass in four straight games, still a school record.  In December 1957, the Philadelphia Eagles selected Jurgensen in the 4th round of the NFL Draft.  For three seasons, he served as backup to the great Norm Van Brocklin, who retired after the Eagles won the NFL Championship in 1960.  The following year, Sonny got his chance.

In his first season as a starting quarterback, Sonny Jurgensen threw for an NFL-record 3,723 yards and 32 touchdowns.  Three years later, he was traded to the Washington Redskins for quarterback Norm Snead.  In October 1964, Jurgensen faced his former team for the first time, throwing for five touchdowns and 385 yards while compiling a passer rating of 120.6.  After the trade, he went 13-3—with 33 touchdown passes against only 16 interceptions—against the Eagles during his career.  In 1967, he broke his own record by throwing for 3,747 yards.  Two years later, Vince Lombardi took over as the Redskins head coach.  That season, Jurgensen—a classic drop back passer–led the NFL in completion percentage and passing yards.  After going 7-5-1 and leading Washington to their first winning season in 15 years, Coach Lombardi died of cancer prior to the 1970 season.  The defensive-minded George Allen took over for Lombardi and, after the “Red Roach” went down with a shoulder injury during the 1971 preseason, Allen replaced him with Billy Kilmer.  The following year, the Redskins won the NFC Championship and earned a trip to Super Bowl VII to play the undefeated Miami Dolphins [Daily Dose, January 14].  Jurgensen, who sat out the second half of the season with a ruptured Achilles tendon, was banned from the team bench by Allen, a stern taskmaster who feared the fun-loving Jurgensen would disrupt the team.  Allen relegated his veteran quarterback to watch the game alone from a 12-person suite inside the Los Angeles Coliseum.  In 1974, at age 40 and in his final season, Jurgensen won his third NFL passing title despite splitting time with Kilmer.  His final NFL game was his only postseason appearance, relieving Kilmer in a 19-10 loss to the Los Angeles Rams during the first round of the playoffs.

In 149 starts over 18 NFL seasons, Sonny Jurgensen had a record of 69-73-7.  He only appeared in one playoff game—yet he is one of the greatest pure passers in football history.  The Red Roach fell through the cracks because he never won a championship, but neither did Dan Marino who, along with Joe Namath [Daily Dose, May 31] join Jurgensen as the three greatest throwers of a football ever to play the game.  Sonny was a true genius at work.  He dropped passes into the hands of his receivers like feathers falling from the sky.  Nobody ever dropped a pass from Jurgensen.  His deep passes—and Jurgensen threw it down the field—were like handoffs.  “Jurgensen may be the best the league has ever seen.  He is the best I have ever seen,” said Vince Lombardi, who won five NFL titles with the Packers. “If we would have had Sonny Jurgensen in Green Bay, we’d never have lost a game.”  The feeling was mutual.  Jurgensen played for nine head coaches during his career and Lombardi was his favorite. “I learned more in five days from Lombardi than I had in 12 years in the NFL,” said Sonny after Lombardi’s death.  Jurgensen was unconventional.  He approached the line of scrimmage like a guy walking up to a bar to order a drink–pot-bellied, hands on his hips, scanning the scene.  And he enjoyed the nightlife.  When Jurgensen was traded from the Eagles to the Redskins in 1964, Philadelphia bartenders wore black armbands.  He once said of Washington head coach Otto Graham, with whom he did not have a good relationship, “He likes candy bars and milkshakes.  I like women and scotch.”

Due to rule changes favoring offense, it is easier than ever to pass the ball in today’s NFL.  Last season, eight of the top nine highest rated passers in history were playing in the league.  It is unfair to compare passers from the “Dead Ball Era”—pre 1978—against those in today’s game, but Mr. Jurgensen’s 82.6 passer rating is the highest from the Dead Ball Era.  Sonny was a honey, throwing for over 32,000 yards and 255 touchdowns in the NFL.  He played seven seasons in Philadelphia, eleven more in Washington, and is in the Ring of Honor of both teams.  He passed for over 300 yards in 25 NFL games and five times threw for over 400 yards.  The Redskins retired his “9” and he was named to the NFL 1960s All-Decade Team.  Jurgensen won three league passing titles and played in five Pro Bowls.  He is beloved inside The Beltway.  For the past 35 years, the immensely popular Jurgensen has served as color analyst on Washington Redskins radio broadcasts.  In 1983, Christian Adolph Jurgenson III—whose pregame ritual included sharing a bologna sandwich with Redskin trainer Tommy McVean—achieved his biggest accomplishment when he was inducted into the Pro Football Hall of Fame.

In 1968, famed Baltimore Colts quarterback John Unitas invited Sonny Jurgensen to the grand opening of his new restaurant, the Golden Arm.  Upon entering, Jurgenson turned to Unitas and said, “Thanks for naming it after me.”