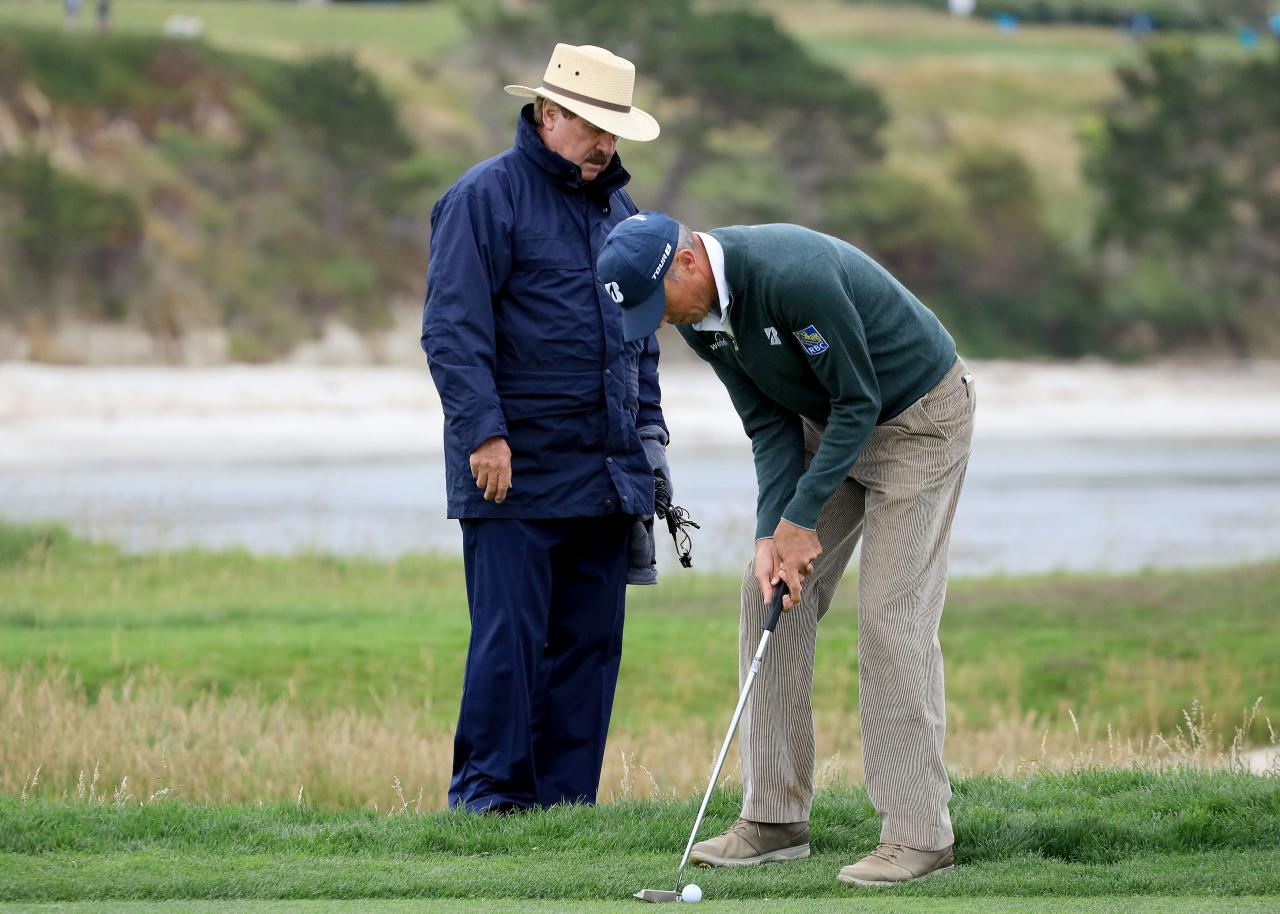 Slugger White may know the Rules of Golf better than anyone on the planet.

Having just completed his 37th year as Vice President of Rules and Competition for the PGA Tour, White is one of the top referees in the world.  He can be found at golf tournaments, riding around on a cart, maintaining law and order.  The consummate professional, White’s office is the golf course.  Working about 30 tournaments a year, the always-dapper official tools around sporting his trademark Panama hat [he owns close to 20], long sleeved dress shirt, and tie – even in the heat and humidity of summer.

One of the most recognizable figures on tour, White has not been sworn at in nearly four decades as a rules official.  In golf, players are self-governing, penalizing themselves when nobody else is watching.  “It’s a different landscape,” said White, who considers Joe West, the dean of MLB umpires, a friend.  “Athletes in other sports are looking for an edge.”

A rules expert, White is called upon to arbitrate at some of the game’s biggest events.  At the 2013 BMW Championship outside Chicago, White saved Tiger Woods from being disqualified.  After reviewing video evidence with Woods showing that his ball had moved after removing a loose impediment while playing the first hole,  the 14-time major champion assessed himself a two-stroke penalty and avoided disqualification for signing an incorrect scorecard.

At the 2005 Michelin Championship in Las Vegas, Kevin Stadler was 15-under, in contention and eyeing a good finish.  Playing the opening hole of the third round, the fourth-year pro pulled his wedge out of the bag and immediately noticed the wedge was bent.  White knew it was a violation of Rule 4-1 [a], which prohibits the use of a club whose playing characteristics have been altered.  After checking with the USGA to see if the rule was still in force, White notified Stadler that he had been disqualified.

Born February 26, 1949, Carlton Palmer White II grew up in Beckley, West Virginia.  His father, who went by “Cotton,” was in the service with a professional fighter nicknamed “Slugger.”  They were buddies, and junior became Slugger when he was one day old.  A standout player at Woodrow Wilson High School, White earned a golf scholarship to Ohio University, arriving in Athens in late summer 1967.  After graduating, he got a job as a teaching pro at Washington Valley Golf Club in New Jersey and, after winning the 1975 Met Open in New York, decided to join the PGA Tour.

White dabbled on Tour from 1975 to 1981.  He had one top-ten finish – at the 1977 Texas Open in San Antonio.  He discovered he may be in over his head while playing with Tom Watson in Atlanta.  After laying up on the par-five 8th hole at Atlanta Country Club, White watched Watson hit a driver off the fairway to a narrow spot on the front of the green. “I said, ‘That’s quite a shot, T,’ recalled White.  ‘He said, yeah, I thought if I could just skid it in there with the driver I might have a good shot at making three.’  I walked away thinking, ‘And I’m trying to beat this guy? He’s hitting a driver off the deck into a little area and skipping it up to the hole.  I realized I may need to rethink my future.”

White earned $32,729 during his time on tour.  Needing to make more money, he decided to pursue other endeavors.  Looking for ex-players to join the field staff, the PGA Tour offered him a rules job in 1981.

PGA Tour events are governed by eight officials.  Dressed is starched shirts, crisply knotted ties and carrying walkie-talkies, golf referees carry an air of authority.  Their primary goal each week is to provide a level playing field for all the contestants by ensuring they play within the rules.  As in all other sports, the best are all but invisible.  They are charged with setting hole locations, outlining water and other hazards with red paint, and aim to get 156 players through each of the first two rounds of play [usually Thursday and Friday, after which the field is cut in half] in an orderly and expeditious manner.

Mark Wilson, a five-time winner on the PGA Tour, appreciates the work of White and his peers.  “Ninety-nine percent of the time, they’re right in what they do.  They aren’t just some guys sitting in golf carts up in the woods sipping coffee,” said the 2011 Phoenix Open champion.  “They know what they’re doing.”

Slugger White, who won the 1980 New Jersey PGA Championship, now makes his home in Ormond Beach, Florida.  In October2016, he was inducted into the West Virginia Golf Hall of Fame.