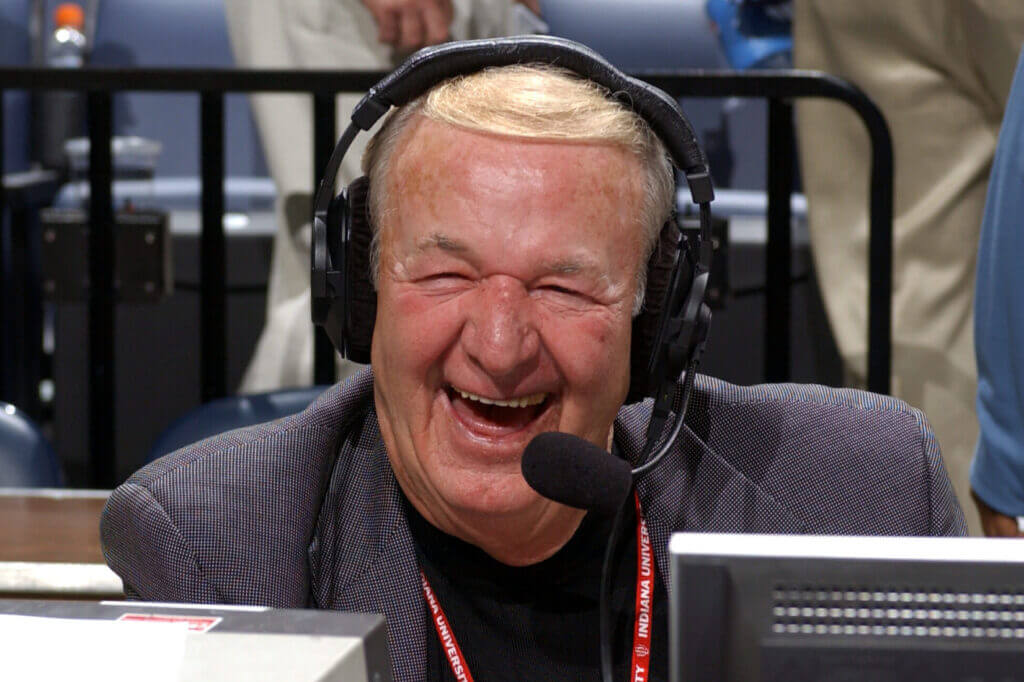 Slick Leonard is the most important man in the history of the Indiana Pacers.

Bobby “Slick” Leonard is Indiana basketball.  No one better embodies its toughness; no one better personifies its passion.  And no one takes more pride in being a native Hoosier.

Captain of the 1953 national champion Indiana Hoosiers,  Leonard was the first person inducted into the IU Sports Hall of Fame.  He is on the Mount Rushmore of Indiana basketball and is a member of the state’s basketball hall of fame.  First as a coach, then an executive, and now as a team radio analyst, “Mr. Pacer” has been the face of the Indiana franchise for more than four decades.

Born and raised in Terre Haute, a working-class town along the state’s western border, Leonard has been named one of the 50 greatest players in Indiana High School history.  A point guard for the “Hurryin’ Hoosiers” of Branch McCracken, he was a two-time All-American at IU.  Leonard hit the game-winning free throw with 27 seconds remaining to beat Phog Allen’s Kansas Jayhawks in the 1953 NCAA title game.  The tenth overall pick in the 1954 NBA draft, Leonard played seven NBA seasons.  In his final year, he served as player-coach for the Chicago Zephyrs, who moved to Baltimore to become the Bullets in 1963.

Signed by the Minneapolis Lakers, Leonard made his NBA debut in October 1956.

He was dubbed “Slick” by teammate George Mikan, whom Leonard had cleaned out in a hand of gin rummy on a bus ride one night.  “How about buying me a cup of coffee,” said Mikan, who was the NBA’s first great big man.  “You’re too slick for me.”  The Lakers moved to Los Angeles in 1960, where Leonard teamed with the legendary duo of Elgin Baylor and Jerry West.  He then spent two years in Chicago, where he made his coaching debut with the Zephyrs.  Leonard relocated with the franchise to Baltimore, then resigned as head coach following the 1963-64 season.

Nine games into their second season as a franchise, the Indiana Pacers hired 36-year-old Bobby Leonard to replace Larry Staverman as head coach.  Leonard led Indiana to the 1969 ABA Finals, the first of five championship series the Pacers would play in over the next seven years.  Slick coached the Pacers for a dozen years and turned them into an ABA powerhouse.  Leonard guided Indiana to three ABA crowns, including back-to-back titles in 1972 and 1973.  With an ABA-lifetime winning percentage of .682, Leonard is the most successful coach in that league’s history.  Winner of an ABA-record 69 playoff games over eight seasons, he was voted coach of the league’s all-time team in 1997, the 30th anniversary of the founding of the ABA.

In the wild, wild West that was the ABA, Leonard led in lawlessness.  Furious over a referee’s call that went against the Pacers during a game in Utah, the combative coach punted the red, white and blue ball into the stands.  After a practice in which his best player, Roger Brown, was loafing, Slick had the team plane take off for a road trip without their star.

The bigger the game, the better coach he was [Leonard was 7-2 in Game 7’s].  Slick’s instructions to his team in end-of-game situations were simple, yet effective.  “Let’s get the ball to Roger, get the hell out of here and go drink some beer.”

Following the ABA-NBA merger in 1976, the NBA allowed Indianapolis to keep its franchise, but with a buy-in of $ 3.2 million that left the franchise in debt, the Pacers nearly folded in 1977.  Behind by two payrolls and hemorrhaging season ticket holders after going 36-46 in their first season in the new league, the franchise was in trouble.

Needing $2 million to avoid bankruptcy – and needing it quickly – Bobby and his wife, Nancy, organized an emergency telethon.  After reaching season-ticket sales of 8,000 within 72 hours, the Pacers were saved.  The drive allowed Indy to remain a viable major-league sports city.  Seven years later, the Baltimore Colts relocated to Indianapolis.

Without Slick, there is no Market Square Arena and no merger with the NBA.   Indy never gets the Colts, and the downtown development that brought the RCA Dome, Circle Centre Mall and White River State Park don’t exist.  His contributions to the game were recognized in 2014 when Mr. Leonard was inducted into the Naismith Basketball Hall of Fame.  His presenters were Larry Bird and Mel Daniels.

Born July 17, 1932, William Robert Leonard was raised in the poorest part of Depression-era Terre Haute.  His dad had a third-grade education and his mother a sixth, and the family lived in a shack with dirt floors.  Basketball became Leonard’s refuge, and he honed his game on the hardscrabble court in Ma Sullivan’s backyard.

At Gerstmeyer High School, Leonard excelled in tennis, winning the state title as a senior, but hoops was his calling.  Basketball was his way out, leading him to Bloomington in the autumn of 1950.  Leading McCracken’s up-tempo offense, the 6’3” ballhandler was named team MVP as a sophomore.

After leading the Hoosiers to back-to-back Big Ten titles and being named All-American in his junior and senior seasons, Leonard graduated IU June 14, 1954.  The following day – a Tuesday – he married Nancy Root, whom he had met when the two were freshman.  Bobby and Nancy Leonard have been married 64 years and have produced five children.

On this date in 1973, the Indiana Pacers beat the Denver Nuggets, 130-113, before 6,327 patrons at the Indiana State Fair Coliseum.  Behind Keller’s 38 points, the Pacers improved their record to 25-21.  Indiana would go 26-12 the rest of the way to finish 51-33, then advance to the 1973 ABA Finals.  There, the Pacers would edge the Kentucky Colonels in seven games to win the third and final ABA title in franchise history.