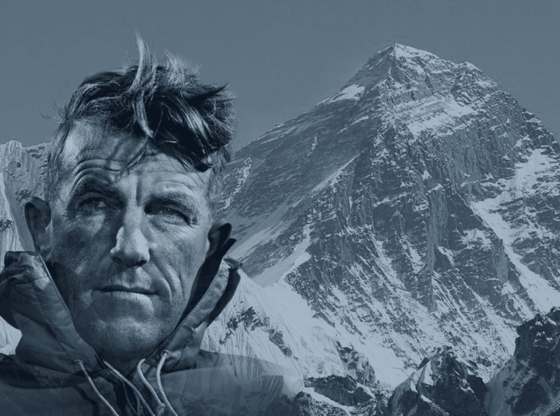 Sir Edmund Percival Hillary is the first man to reach the top of Mount Everest, the highest point on Earth, but he would not have earned this distinction had in not been for a failed oxygen tank.

Born in Auckland, New Zealand on July 20, 1919, the 6’5” Hillary began climbing at age 16 and completed his first major climb in 1939. He studied mathematics and science at Auckland University College and followed in his father’s footsteps by working as a beekeeper during the summers to allow him to pursue climbing in the winter. He reached the top of Aoraki/Mount Cook, New Zealand’s highest peak, in 1948, was part of a British reconnaissance expedition to Everest in 1951 and participated in a failed attempt to scale Cho Oyu, the sixth highest mountain in the world, in 1952. In those days, the route to Everest was closed by Chinese-controlled Tibet and Nepal only allowed one expedition per year. A Swiss expedition had come within 800 feet of the summit in 1952 but was forced back by bad weather. A French team had been granted permission to attempt to summit in 1954 and a Swiss team in 1955, so the British felt pressure to be first, having been invited by the Joint Himalayan Committee to make their attempt in 1953. John Hunt was to lead the expedition that involved over 400 people, including 362 porters, 20 Sherpa guides and 10,000 pounds of baggage.

This was the ninth British mountaineering expedition to attempt the first ascent of Mount Everest, and the “Icefall Party”, which included Hillary, reached Base Camp at 17,900 feet elevation on April 12, 1953. A series of advanced camps were created, slowly reaching higher up the mountain. Camp II was established at 19,400 feet by Hillary, Camp III at 20,200 on April 22, Camp IV on May 1, Camp V two days later, Camp VI the day after that at 23,000 and two weeks later, on May 17, Camp VII was established at 24,000 feet. It took four more days to get climb 2,000 feet and another five to get to the South Col at just under 26,000 feet. It was at this time that one of the two climbing pairs, previously selected by Hunt, set out for the summit on May 26. Using closed-circuit oxygen, Tom Bourdillon and Charles Evans came within 100 meters of the final summit before exhaustion and oxygen equipment problems forced them back. On May 27, the second and final assault on the summit was made by the second climbing pair, Edmund Hillary and Tenzing Norgay, a Sherpa from Nepal. They reached the 29,028 foot summit at 11:30 am on May 29 via the South Col route. The two stayed for 15 minutes, long enough to take some photographs and bury some sweets and a small cross in the snow before descending.

Edmund Hillary was immediately appointed a Knight Commander of the Order of British Empire and John Hunt a Knight Bachelor for their efforts. The expedition members were treated like royalty and had gifts of money and jewels bestowed upon them. The government of India created a new Gold Medal, an award for civilian gallantry, and made Hillary, Hunt and Norgay the first recipients. Further honors continued to descend on the members of the expedition, including medals, honorary degrees and titles. From 1955-58, Edmund Hillary led an expedition that successfully completed the first overland crossing of Antarctica, via the South Pole, in 46 years. He subsequently reached the North Pole, making him the first person to reach both poles and summit Everest. He climbed 10 more peaks in the Himalayas from 1956-65.

Mr. Hillary founded the Himalayan Trust following his ascent of Everest which was designed to helping the Sherpa people of Nepal. Time magazine named him one of the “100 Most Influential People” of the 20th century. He died of heart failure in Auckland on January 11, 2008.