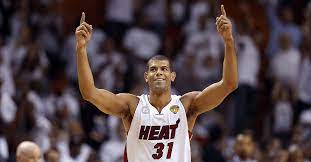 Shane Courtney Battier is the only basketball player in history to be voted national player of the year in both high school and college.

Born in Birmingham, Michigan on this date in 1978, he was the state’s Punt, Pass and Kick champion at age 12. He was 6’4” tall by the time he was a seventh grader at Detroit Country Day School and was named fourth-best seventh grader in the U.S. by Hoop Scoop magazine. One year later, he grew to 6’7”. Shane led the Yellow Jackets to three state championships and followed in the footsteps of Chris Webber, who graduated from Detroit Country Day six years earlier, by being named the state of Michigan’s Mr. Basketball as well as Naismith National Prep Player of the Year. They remain the only two Naismith winners from the state of Michigan. Battier graduated in 1997 with a 3.96 GPA, was named DCDS’s outstanding student in his senior year and accepted a basketball scholarship to Duke University to play for legendary coach Mike Krzyzewski.

At Duke, he became a defensive specialist that was often called upon to guard the opponent’s best player. He was selected to the ACC All-Freshman Team in 1997-98 and was named NABC Defensive Player of the Year as a sophomore while shooting 54.5 % from the floor. He led the Blue Devils to the championship game that sophomore season, where they lost to UConn, 77-74. As a junior, he was named All-ACC and second team All-American as well as being voted to the Academic All-American team. His breakout season came in his senior year, when the 6’8”, 225 forward led Duke to a victory over Arizona in the national title game in route to being named the Most Outstanding Player of the Final Four. Battier averaged just under 20 points and over 7 rebounds per game and was named Naismith National Player of the Year, won the Wooden Award, Oscar Robertson Trophy, was named NABC National Defensive Player of the Year and was first-team All-American. He graduated with a degree in religion and finished his career at Duke as one of only four players in NCAA history to total at least 1,500 points, 500 rebounds, 200 steals, 200 assists and 200 blocked shots in a career and left as the school’s all-time steals leader.

Mr. Battier was selected by the Vancouver [now Memphis] Grizzlies with the sixth pick of the 2001 NBA Draft. He established himself as a stalwart defender, hustler and versatile player, leading to his being named to the All-Rookie First Team in 2002. After five seasons in Memphis, he was traded to the Houston Rockets, where he developed a reputation for relentless game preparation and playing team-oriented basketball. In 2006, he earned a bronze medal while playing for the U.S. national team in the FIBA World Championship. He was traded back to Memphis in February of 2011 for two players and a first round draft pick and made a game-winning three point shot to help the Grizzlies to their first-ever playoff win following losses in their first 12 tries. He signed with the Miami Heat early the following season and shot 57.7% from three point range in the 2012 NBA Finals to help the Heat win the title, a crown they successfully defended the following year. Battier announced his intentions to retire following the 2013-14 season, a year in which the Heat reached the Finals for the 4th straight time before losing to the San Antonio Spurs in 5 games.

Shane Battier was voted 7th smartest athlete in sports by the Sporting News in 2010. Detroit Country Day School retired his # 55 jersey and Duke his # 31 jersey. He now works as a commentator for ESPN.