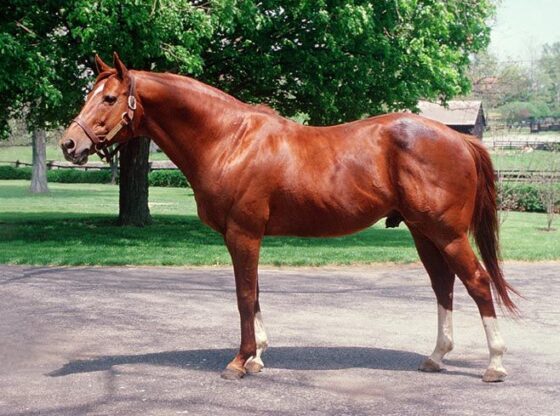 There is an old expression in horse racing that there is no such thing as a sure thing.  That certainly did not apply to Secretariat in 1973.

Foaled March 30, 1970, at The Meadow in Caroline County, Virginia, the chestnut stallion was the son of 1957 Preakness and Three Year Old Horse of the Year winner Bold Ruler.  Secretariat’s grandsire, Nasullah, was the great-great grandfather of Seattle Slew, winner of the Triple Crown in 1977.  His dam, Somethingroyal, was 1973 Broadmare of the Year and bore five stakes winners.  Born with three white socks and a star with a narrow blaze, the colt still did not have a name by the time he was a yearling.  The first five names that Meadow Stables submitted to the Jockey Club were denied for various reasons.  The sixth—Secretariat—was finally accepted.  Secretariat was owned by Penny Tweedy and trained by Lucien Laurin.  He raced for the first time as a two-year-old at Aqueduct on July 4, 1972, finishing fourth by one-and-a-quarter lengths after being impeded at the start.  The bright red colt then won five races in a row and finished the season with seven wins in nine races.  Secretariat was named 1972 American Horse of the Year, the first time in history a two-year-old won that award.  He also won the Eclipse Award for American Champion Two-Year-Old Male Horse. After beginning his three-year-old season with two easy wins, Secretariat finished third to Sham in the Wood Memorial, the final preparatory race for the Kentucky Derby.  Secretariat came into the 1973 Derby as 3-2 favorite, with Sham next at 5-2.  At Churchill Downs, Secretariat broke last, but gradually moved up on the field, overtook Sham at the top of the stretch and pulled away to win by 2 ½ lengths.  “Big Red” ran each quarter mile segment faster than the one before it to set a track record of 1:59.4, a mark that still stands.  No other horse had ever won the Derby in less than two minutes before, and it has since been accomplished once—by Monarchos in 2001.  At the Preakness in May, Secretariat broke last but gained the lead at the first turn.  Never challenged, he won by two-and-a-half lengths, with Sham second, in 1:53—a new stakes record.  As Secretariat prepared for the Belmont, he appeared on the covers of Time, Newsweek and Sports Illustrated.  He had become a national celebrity and his jockey, Ron Turcotte [Daily Dose, July 22] was the most famous rider in thoroughbred racing.

Only four other horses competed in the 105th running of the Belmont Stakes, including Sham, who had finished second in the Kentucky Derby and Preakness.  At one-and-a-half miles, the Belmont is the longest of the Triple Crown races.  Nicknamed “The Test of Champions,” it challenges a horse’s speed and stamina like no other race.  With so few horses entered and with Secretariat expected to win, no “show” bets were taken.  Big Red went off as a 1-10 favorite [$ 2.20 payout on a $ 2 bet].  The track was fast and the weather warm and sunny as a crowd of over 67,000 race fans saw both horses set a fast early pace, opening a ten-length lead on the field.  At the six furlong mark, Sham began to tire, ultimately finishing last.  Secretariat continued the fast pace, opening a larger and larger margin on the field.  Chic Anderson, announcing the race for CBS, said, “Secretariat is widening now!  He is moving like a tremendous machine!”  He opened a one-sixteenth of a mile lead on the field to win by 31 lengths, breaking the largest margin of victory record of 25 lengths, set by Triple Crown winner Count Fleet in 1943.   Pimlico Race Track General Manager Chick Lang observed, “He looked like a Rolls-Royce in a field of Volkswagens.”  He ran the fastest 1 ½ miles on dirt in history, going 2:24 to break the Belmont record by over two seconds.  The chestnut thoroughbred, who stood just over 16 hands tall [66 inches] and weighed 1,175 pounds, averaged 37.5 miles per hour to set a record that still stands.  Secretariat put on one of the greatest athletic performances of all time to become the first Triple Crown winner in 25 years.  After winning the Canadian International in October 1973, he was put to stud at Claiborne Farms in Paris, Kentucky.

In 1973, Secretariat won nine of 12 races, with two seconds and one third-place finish.  He won each leg of the Triple Crown in record fashion, setting track records that still stand 43 years later.  In his 16 month career, he raced 21 times, winning 16 and placing in the money in all but one.  He was named 1973 Horse of the Year and won the Eclipse Award as Three-Year-Old Male Horse of the Year.  In 1999, ESPN ranked Secretariat the 35th best North American athlete of the 20th Century, between Lou Gehrig and Oscar Robertson [Daily Dose, November 24].  He was the first animal inducted into the Kentucky Athletic Hall of Fame and ESPN Classic voted his run at the Belmont second to Wilt Chamberlain’s 100-point game [Daily Dose, March 2] as the greatest sports performance of the century.  After contracting laminitis, a painful and often incurable hoof disease, Secretariat was euthanized October 4, 1989.  He was 19. On this date in 1973, Secretariat won the Belmont Stakes, five weeks after he had won the Kentucky Derby and three weeks after his victory in the Preakness Stakes.