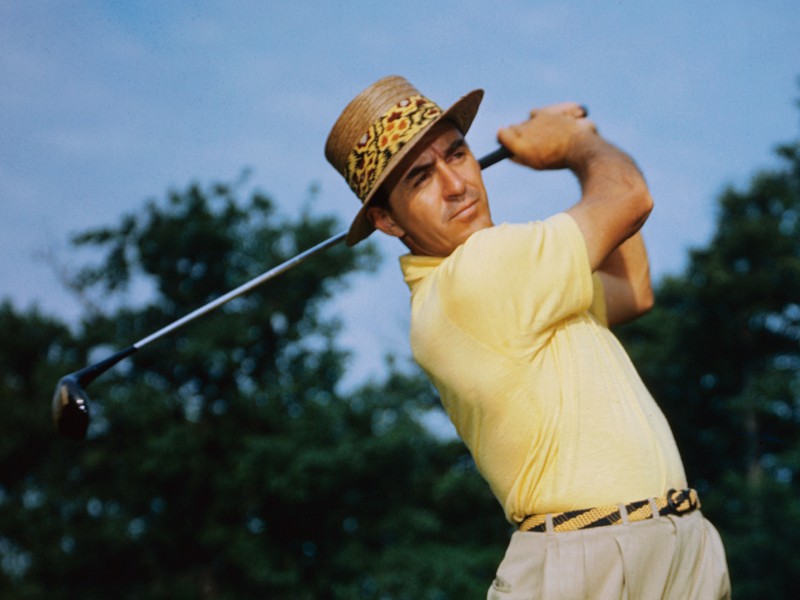 The Wall Street Journal wrote, “When God decided what He wanted a golf swing to look like, He sent Sam Snead down to show us.”

In 1912, two of the most iconic golfers ever to pick up a club were born within six months of each other—Byron Nelson [Daily Dose, February 4] in February and Ben Hogan [Daily Dose, August 13] six months later.  Between them was Sam Snead, who entered this world 104 years ago today.  Born in Ashwood, Virginia, he grew up on a farm in nearby Hot Springs, where he was an exceptional athlete who participated in baseball, football, basketball and track.  Like Hogan and Nelson, Snead began caddying at a young age, working at The Homestead club in Hot Springs.  He developed a keen eye honed learning to shoot a squirrel rifle while hunting for food and, after a back injury derailed his football career, Snead turned to golf.  In 1935, he became assistant pro at White Sulphur Springs in West Virginia.  The following year, he returned to Hot Springs to serve as teaching pro at the Cascades Inn.  Snead won his first event—the 1936 West Virginia Closed Pro—by 16 shots.  Later that summer, he won the first of 17 career West Virginia Open titles.  1937 was Snead’s first full year on the PGA Tour.  After placing seventh in his first event, the L.A. Open, Snead went on to win five times and finished third on the money list.  The following year, “Slammin’ Sam”—so named because of his ability to hit the ball so far—claimed the first of four career money titles.  Snead’s swing was so rhythmic and smooth it was like watching ice cream melt.  He was so flexible he could bend his wrists and touch his arms with his fingers—in both directions.  After winning his first major at the 1942 PGA, Snead served in the Navy until his discharge in 1944.

Upon returning from World War II, Sam Snead won 14 tournaments—including the 1946 Open Championship at St. Andrews—in three years.  He claimed the first of his three Masters victories in 1949 and won the second of three career PGA titles later that summer.  He won ten events in 1950 but lost Player of the Year honors to his friend and rival Ben Hogan, who courageously won the U.S. Open after returning from a nearly fatal car wreck.  His scoring average of 69.23 that season was a PGA Tour record that stood for 50 years before being broken by Tiger Woods in 2000.  Over the next 15 years, Snead won 22 more events, including two majors, to collect the most career wins in Tour history.  At 61, he became the oldest player in history to make the U.S. Open cut.  In 1983, at the age of 71, he shot a round of 60 at The Homestead and, from 1984 to 2002, he hit the honorary tee shot at the Masters, where he was joined by Bryon Nelson in 15 of those years.  Sam Snead retired from the Tour in 1979, at age 67.

No player in history has been so good, for so long, as Slammin’ Sam Snead.  ESPN.com wrote, “Success in his golfing prime made Sam Sneed a star.  Longevity helped build a legend.”  He won 82 PGA Tour events, three more than Tiger Woods and nine more than Jack Nicklaus, who are second and third on the all-time list, respectively.  Snead won seven major championships.  The only one that eluded him was the U.S. Open, an event in which he finished runner-up four times.  In 1950, he won ten events and is still the last pro to win ten or more tournaments in a season.  Mr. Snead won the Greater Greensboro Open a record eight times, the last at nearly 53 years old, giving him the distinction of being the oldest winner of a Tour event.  Snead is the first pro to shoot a score lower than his age, firing a final round 66 at the Quad Cities Open at age 67.  In 42 years on Tour, Snead won three money titles and earned the Vardon Trophy for lowest scoring average four times.  In 1974, at age 67, he tied for third at the PGA and is the only player in history to post a top-ten finish in a least one major in five different decades.  A fierce competitor, Snead played on six Ryder Cup teams over 22 years, believing, “Of all the hazards, fear is the worst.”  He captained the U.S. Ryder Cup team three times, was given the PGA Tour Lifetime Achievement Award in 1998 and was elected to the World Golf Hall of Fame in 1974.  Mr. Snead died following complications from a stroke in 2002, four days shy of his 90th birthday.

Happy Birthday to one of the sweetest swingers ever to play the game of golf.

“Keep close count of your nickels and dimes, stay away from whiskey and never concede a putt.”– Sam Snead