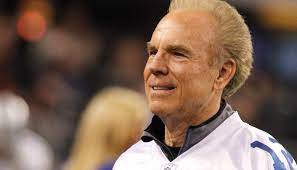 Roger Staubach is the best quarterback the Dallas Cowboys have ever had.

Staubach’s story is that of an American hero.  After being awarded the 1963 Heisman Trophy as a Naval Academy junior — and just days after the assassination of President John F. Kennedy — Staubach led the Midshipmen to a thrilling victory over Army in the most emotional game in the annals of their storied rivalry.  Despite being the best college player in the nation, Staubach was considered a draft risk.  At the height of the Vietnam War, he still owed the Navy five years.

Wary of his military obligation, pro teams thought picking Staubach a roll of the dice.  The 6’3”, 197-pound gunslinger wasn’t selected until the tenth round of the NFL draft – and fell all the way to the 16th round of the AFL draft.  Following four years of military service — including a tour of duty in Vietnam — Staubach joined the Dallas Cowboys.  He led Dallas to five Super Bowls, winning two, and became the first player to win both the Heisman Trophy and Super Bowl MVP.

In 11 NFL seasons, Staubach guided the Cowboys to the playoffs every year but one.  The undisputed leader of America’s Team, he directed the Cowboys to four NFC Championship games and the first world title in franchise history.  Nicknamed Captain Comeback, Staubach led Dallas to 23 game-winning fourth quarter drives.  In 14 of those contests, the Cowboys were either tied or losing with two minutes to play.

Staubach’s most famous moment came in a 1975 playoff game against the Vikings at Metropolitan Stadium in Minnesota.  With the clock winding down and his team trailing 14-10, Roger the Dodger scrambled around before heaving a 50-yard pass downfield, to where he thought Drew Pearson – his favorite target – might be running.  “I just closed my eyes and said a Hail Mary,” said Staubach afterward.  Pearson made a nice catch of Staubach’s imperfect pass and scored, giving the Cowboys a 17-14 victory.  A new football catchphrase was born.

Mr. Staubach played in six Pro Bowls.  He led the league in passing four times, won 75 percent of his regular season games, and was named to the 1970s All-Decade Team.  In 1979, his final season, Staubach set career highs in completions, passing yards and touchdown passes.  Despite being at the top of his game, the 38-year-old signal-caller retired after the season to protect his long-term health.  Having suffered 20 concussions in his career, he feared the consequences of another blow to the head.

Born in Cincinnati February 5, 1942, Roger Thomas Staubach was an only child raised by parents of strong Christian faith.  After graduating Purcell High School in 1960, he spent one year at New Mexico Military Institute before enrolling at the U.S. Naval Academy.  In 1962, Staubach became the starting quarterback as a third-class midshipman [sophomore].  The following year, he led the Midshipmen to a record of 9-1, including a 35-14 trouncing of Notre Dame in South Bend.  Navy did not beat the Fighting Irish again until 2007, 44 years later.

Staubach won the Heisman Trophy in his second class [junior] season — 1963.  He also garnered the Maxwell Award and the Walter Camp Trophy as the best player in college football.  As a senior, Staubach injured his heel in the season opener.  He missed four games and Navy stumbled to a 3-6-1 record.  In three seasons in Annapolis, Staubach amassed a school-record 4,253 yards in total offense.  He captained the Midshipmen baseball team as a senior, and the Naval Academy retired his jersey number [12] during his graduation ceremony in 1965.

Staubach never should been admitted into the Naval Academy as he’s color blind [officers must be able to distinguish the difference between red [port] and green [starboard] lights and discern the color differences in electrical circuitry].  Staubach could have stayed stateside and avoided going to war, but volunteered for a one-year tour of duty in Vietnam.  He served as a Supply Corps officer at the Chu Lai port, an air base that provided support to Da Nang Air Base 50 miles to the northwest.  The quarterback-turned-naval-officer was in charge of 41 men, which he later credited with helping to mold him into a leader.

During his time in he service, Staubach worked out with swift boat officers and Navy SEALS to stay in shape.  After Vietnam, he transferred to NAS Pensacola, where he played with the Goshawks.  One of the last military installation tackle football teams, the Goshawks played against mid-level college teams in the southeast.  In summer 1968, he took two weeks’ leave and traveled to the Cowboys rookie camp in Thousand Oaks, California.  Staubach impressed Dallas coach Tom Landry, who let the quarterback keep the Cowboys playbook to study while in Pensacola.

Upon completion of his military obligation in 1969, Staubach joined the Cowboys as a 27-year-old rookie.  He started one game in 1969, throwing a 75-yard touchdown pass and rushing for another as Dallas beat the St. Louis Cardinals, 24-3.  Staubach started three games in 1970, platooning with Craig Morton.  Unsettled on his starter in 1971, Landry juggled Staubach and Morton at quarterback.  In a Week 7 loss to the Bears, the duo alternated plays.

After the loss to Chicago, Dallas was 4-3.  Determined to rescue the season, Landry settled on Staubach and the Cowboys reeled off ten straight wins, including their first Super Bowl title.  Captain Comeback led Dallas to a second Super Bowl title in 1977, then piloted the Cowboys to two more Super Bowls, where they lost to the Pittsburgh Steelers both times by a total of eight points.

Winner of the 1978 NFL Man of the Year Award, Staubach received the U.S. Navy Memorial Foundation’s Lone Sailor Award in 1996 for his naval service.  After his playing days were over, Mr. Staubach started a commercial real estate business in Dallas.  In July 2008, The Staubach Company was sold to Jones Lang LaSalle for $613 million.

Roger Staubach retired in March 1980 with the second-highest passer rating [83.4] in history, behind only Otto Graham at 86.6.  A 1981 inductee into the College Football Hall of Fame, he was elected to the Pro Football Hall of Fame in 1985, becoming – after Bob Lilly – the second Dallas Cowboy to be enshrined in Canton.

In a 2010 poll conducted by the Dallas Morning News, Roger Staubach was named the No. 1 Dallas Cowboy of all time.