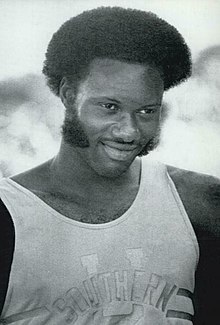 Rod Milburn was a man with enormous talent and terrible timing.

Rodney Milburn, Jr. was born in Opelousas, Louisiana—a small town 30 miles west of Baton Rouge—on this date in 1950.  He was one of seven children born into a poor family in a racially segregated area and attended J.S. Clark High School, an all-black school on the north side of town.  Claude Paxton coached the Clark HS track and field team that practiced on a dirt and grass field rather than a cinder track.  As a ninth grader, Milburn sheepishly asked to give the hurdles a try.  In his first race, Milburn’s legs smacked into every single hurdle, yet the determined freshman still won.  Paxton, who had led Clark to state track and field titles, recognized immense potential in the freshman, leading him through grueling workouts over wooden hurdles made in the assistant coach’s woodshop class.  Conventional hurdlers drive the arm opposite their lead leg forward and the other back while clearing each hurdle.  Milburn developed a unique approach—the double arm motion—swinging both arms forward while leaping the hurdle.  Paxton placed a dime on each crossbar and instructed Milburn to knock off the dimes as he cleared each, but not to touch the hurdles themselves.  The “dime method” taught Milburn to skim fluidly over the hurdles.  By his senior year, “Dice” Milburn had become one of the preeminent prep hurdlers in the country.  His breakthrough came in June 1969, at the prestigious Golden West meet in Sacramento, California, where Milburn ran 13.4 in the 120-yard high hurdles to set a new national high school record.

In 1969, Milburn accepted a scholarship to Southern University in Baton Rouge, where he joined defending Olympic hurdles champion Willie Davenport on the Jaguars track team.  At the 1971 USA Championships, he gained international recognition by running the 120-yard hurdles in 13.0 to set a new world record.  At the Pan Am Games later that year, he took gold in the high hurdles and won bronze as part of the 4 x 100 meter relay team.  Dice won titles at both the NCAA indoor and outdoor championships.  Milburn was unbeaten in 28 races, including 15 finals, before finishing behind Davenport at the 1972 Olympic Trials to claim the third and final spot on the 110 meter hurdles team.  At the 1972 Munich Games, Milburn won the gold medal while tying the world record.  He retained his number-one world ranking from 1971 through 1973 before deciding to join an upstart professional track circuit–the International Track Association–which folded after two years.  In 1975, Milburn, who had never played organized football, tried out with the Shreveport Steamer of the World Football League but failed to make the team.

Rodney Milburn was the most dominant hurdler of his era, breaking or tying the world record in the high hurdles five times.   His 1971 season ranks as one of the greatest in track and field history.  Milburn won 28 straight races, including a gold medal at the Pan Am Games and was named “Athlete of the Year” by Track & Field News.  “Hot Rod” was a four-time AAU champion and won NCAA and NAIA college titles.  He lost two races in six years and set a world record that stood for five years.  Mr. Milburn’s timing off the track was not as successful.  He attempted to parlay his Olympic success to a professional career, first with the fledgling ITA and later the World Football League.  After both disbanded, Milburn was declared ineligible to compete as an amateur, denying him the opportunity to defend his Olympic title at the 1976 Summer Games in Montreal.  By 1979, Milburn had regained his amateur status.  Within two months, he won an indoor national championship and established a rivalry with Renaldo Nehemiah [Daily Dose, March 24],  America’s top hurdler.  Milburn lost a chance to return to the Olympics when the U.S. boycotted the 1980 Moscow Games and retired from track in 1983.  The following year, he was appointed head track coach at Southern University, a position he held for three years.  Shortly thereafter, he took a job as a crewman at a Georgia-Pacific paper mill in Port Hudson, Louisiana.  By autumn 1997, financial hardship had forced Rod Milburn to move into a homeless shelter.  On November 11 of that year, he donated plasma to afford cab fare to make his shift at the bleach plant.  While inspecting a hopper car filled with hot liquid chemicals, Mr. Milburn accidently slipped into the vat and died of burns from the scalding liquid.  He was 47 years old.